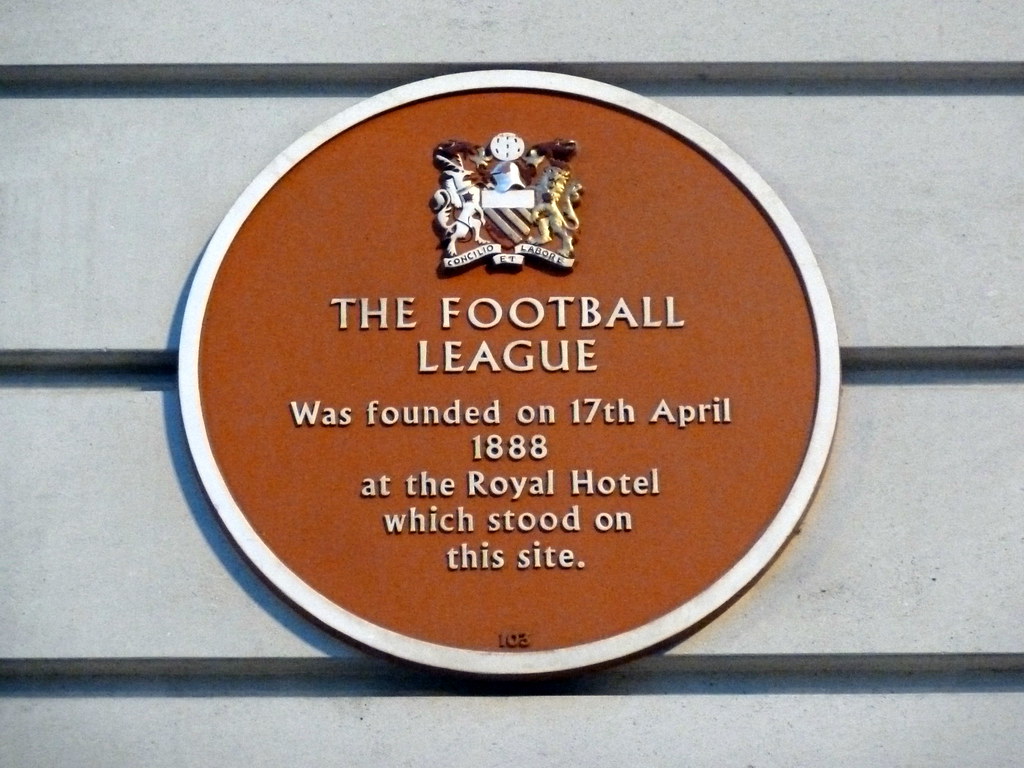 The word ‘professional’ was initially almost a taboo word in football. Teams would arrange their own matches, with plenty guilty of breaking the amateur rules in place at the time.

Then, in 1885, after four years of deliberating the Football Association decided to end this restriction, and the game turned pro thereafter.

It took another three years, though, for the Football League to form on April 17 1888, in what is the oldest division of its kind in world football still going strong today.

But it’s fair to say that its 12 original members have followed widely different paths since then.

Founder Members of the Football League:

There were 12 founding members of the English Football League in 1888. They were:

Not to be confused with Stanley, Accrington F.C. folded in 1896; by which time it was just 18 years old.

The club had already been expelled from the FA for paying a player before becoming one of the Football League’s 12 founders in 1888, and resigned from the league after being relegated in 1892-93 rather than have to play in the Second Division. In doing so, they became the first original club to leave the League permanently.

The club moved to the Lancashire League, before an application for re-election to the Football League ended in failure. After financial problems began to engulf them, Accrington folded in 1896, after a 12-0 defeat to fellow Lancastrians, Darwen.

The town would have another team in the Football League again by 1921-22, though, when Accrington Stanley became a member following a major expansion.

They were then liquidated in 1966 and reformed two years later under the same name, with the club still going today and having won promotion to League One for the first time in its history in 2018.

The formation of the Football League was largely thanks to Villa director William McGregor, who put initial plans in place for the division, first coming up with the idea to play competitive matches before inviting clubs to a meeting to discuss the concept before the 12 original teams founded it in 1888.

Since being founded in 1874, Aston Villa have become not just one of the most decorated clubs among the 12 founding members of the Football League, but in English football history, too.

The Midlands club have seven league titles to their name, as well as the same number of FA Cups, five League Cups and one European Cup.

Though Villa’s recent history has been a little short of success, with their most recent of the above honours coming in 1996, when they beat Leeds United at Wembley to lift their fifth League Cup.

They returned to the Premier League in 2019 after three seasons in the Championship, the first time they had experience life in the second tier since 1988.

Another Lancashire outfit, Blackburn are one of just three clubs to have helped form both the Football League in 1888 and the Premier League in 1992, along with Villa and Everton.

Again, despite financial issues and lower-league football plaguing much of their recent history, they are among the more successful crop of the original 12.

They boast two First Divisions, six FA Cups and one League Cup, as well as arguably their greatest triumph – their Premier League title in 1994-95.

Due primarily to the financial backing of owner Jack Walker, the leadership of manager Kenny Dalglish, and the devastating strike partnership of Alan Shearer and Chris Sutton – who scored almost 60 goals between them – Rovers became champions of England.

Since the league’s inception in 1992, they are one of just six teams to have reached this feat, but they have been out of England’s top-flight since 2012, falling to League One for one season since then, too.

One of English football’s great traditional clubs, the highs of Bolton’s past must feel an eternity away from the financial issues currently threatening their existence.

Initially called Christ Church Football Club, the Trotters spent more seasons in the top tier than any other club without winning the title, but the honours list does include four FA Cups, before participating in European football for the first time in the 2005-06 UEFA Cup.

They were relegated from the Premier League along with Rovers in 2012, and have been blighted by off-the-field woes since 2015, with the club presently in administration.

They suffered a second relegation to the third tier in three years in 2019, before starting the following campaign on -12 points and with barely any senior players on their books.

Though the later 1900s had their dark moments – in 1987 they seriously risked relegation to the Conference and possible dissolution – the club’s recent chapters have been far brighter.

The Clarets are almost Premier League regulars at this point, having survived each top-flight campaign fairly comfortably since 2016-17.

They recorded their highest league finish since 1974 in 2017-18, ending in seventh, which also saw them return to European competition for the first time in 51 years, in the form of the Europa League.

The Rams were one the first Football League season’s bottom four, along with Burnley, Notts County and Stoke, but were successfully re-elected to participate in the following campaign.

Their recent history has been spent almost exclusively in the Championship; only one season since 2004-05 have they spent outside the second tier.

And that was their disastrous 2007-08 campaign, when they set a record for the lowest final points total of 11, managing just one win all season.

Along with Villa, Everton are undoubtedly among the most successful of the original 12, with nine First Division titles – the fourth-most in English football – five FA Cups and a European Cup Winner’s Cup making up the bulk of their honours list.

They also hold the record for the most top-flight seasons competed in (116) since the Football League was formed.

But the Toffees are currently experiencing the longest trophy drought in their history, with the 1995 FA Cup the last piece of silverware lifted by the men in royal blue.

Formed in 1862, Notts County are the oldest professional club in the world, with their FA Cup triumph in 1894 the club’s only major trophy.

Aside from two brief spell in the 1980s and 1990s, though, they have never really been top-flight regulars since the early 1900s, and are another club to have been hit by financial problems since the turn of the millennium.

And in the 2018-19, they were relegated to the National League, marking their first exit from the Football League in the club’s history.

The original Football League champions, going all 22 games unbeaten in its inaugural season, Preston are also the first English team to have achieved a league and cup double, which they managed in 1889.

The club that boasted the likes of Bill Shankly and Tom Finney have won nothing major since their second FA Cup in 1938, to go with their two First Division titles, and have not contested top-flight football since 1961.

They have pushed for the Championship play-offs since a four-year stint in League One ended with promotion back to the second tier in 2015, but have yet to make the return to English football’s grandest stage.

Another of football’s oldest clubs, the Potters were founded in the 1860s by the name of Stoke Ramblers, before becoming simply ‘Stoke’ in 1878 and then ‘Stoke City’ in 1925 after Stoke-on-Trent was granted city status.

They finished bottom of the first season of the Football League, and the club’s only major honour came in 1972, when the beat Chelsea 2-1 to lift the League Cup.

They returned to the top tier in 2008 for the first time since 1985, and their ten-year stay in the Premier League included an FA Cup final, three top-half finishes and a Europa League campaign, their first venture into European football since 1975,

One of England’s archetypal ‘yo-yo clubs’, much of West Brom’s recent history has been spent in-between England’s top two divisions.

Recently, though, West Brom having been relegated from the Premier League four times and enjoyed as many promotions back to the top tier since 2002. This doesn’t explain their ‘boing boing’ tag, though – you can find out about the unusual origins of that here.

Formed as St Luke’s F.C. in 1877, the Black Country have spent the vast majority of their later campaigns in the Championship.

But in 2018-19, their first season back in the Premier League since 2011-12, Wolves reached a superb seventh place, the joint-fourth best finish for a newly-promoted side and their own highest final position since they ended 1979-80 in sixth.

That year, they also reached the first cup semi-final in 21 years, falling at the penultimate hurdle to eventual runners-up Watford, and qualified for Europe for the first time since that 79-80 campaign.

One thought on “Founding Members of the Football League: Where Are They Now?”