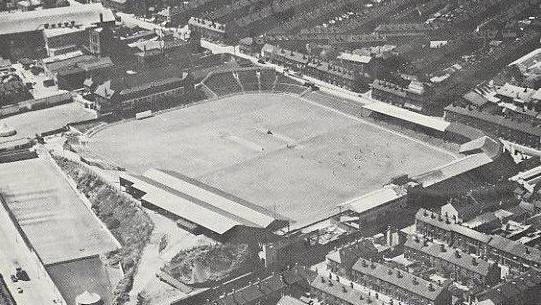 While state-of-the-art modern stadiums may get our mouths watering, like Tottenham’s £1 billion arena with its magic beer taps, glass walkway and retractable pitch, there’s nothing quite like the feel of a football ground that’s grown old gracefully.

The wooden seats. The stone pillars. The creaking of the gantry. The obstructed views. Granted, they may not even pass safety tests soon, and they’ve certainly seen better days, but they’ve also seen a lifetime of footballing memories and more.

*Note: how old a stadium is will be defined by when it started hosting football matches, not when its building was completed.

What is the Oldest Football Stadium In The World?

If we’re talking about football at any level (i.e. not just professional), then this honour goes to Sandygate Road, home of Hallam FC in Crosspool, Sheffield.

The ground, which can hold up to 700 and is situated some 800 feet above sea level, opened its gates in 1804, but following the creation of the world’s oldest club, Sheffield FC, in 1857, members of the Hallam Cricket Club then decided to form their own football team, and did so in 1860 with Hallam FC.

The first game Sandygate Road hosted was on Boxing Day of 1860, between Hallam and Sheffield, and the stadium has even gone on to be recognised by the Guinness World Records as the oldest as far as football is concerned (Sheffield FC moved to their first permanent home, the BT Local Business Stadium, in 2001).

Today, Hallam play in the Northern Counties East League Division One, way down in the tenth tier of the English football pyramid.

In terms of the oldest stadium still hosting professional football, that honours goes to League Two Mansfield Town’s Field Mill; now known as the ‘One Call Stadium’, it has hosted the beautiful game since 1861, edged out by just a year by Sandygate Road.

Which is the Oldest Premier League Stadium?

Of the 20 sides competing in England’s top tier in 2020-21, Sheffield United boast the oldest stadium in Bramall Lane, a footballing theatre since, again, the 1860s.

Initially opened as a cricket ground in 1855, it was not until December 29, 1862 that Bramall Lane hosted its first football match which, like Sandygate Road’s first game, was contested between Hallam FC and Sheffield FC. In a bid to raise money for the ‘Lancashire Mills Distress Fund,’ the clash lasted a goalless three hours.

The stadium has hosted much more than just Sheffield United home games, though, from FA Cup semi-finals and final replays to Bruce Springsteen concerts and evangelist rallies.

But it was after the Lane’s first FA Cup semi-final in 1889, between Preston and West Brom, that Sheffield United were formed. With paltry gate receipts in the region of £500, the stadium needed its own club to be resident – and so the Blades were formed.

Bramall Lane also played host to the world’s first floodlit football match in October 1878, as well the Premier League’s first goal in 1992, when Brian Deane netted for the Blades against Manchester United.

What is the Oldest Football Stadium in Europe (Excluding UK)?

That title would seem to go to Milan’s Arena Civica, built in 1807 at the request of Napoleon Bonaparte, crowned King of Italy in 1805.

In one of the first football matches to be played in the city, AC Milan beat both Mediolanum and Juventus in the space of two days at the stadium in May 1900 to win the Medaglia del Re (Medal of the King). Milan also used the ground as a training pitch and occasionally for league matches until 1914.

When Inter Milan formed in 1908, they first took up residency at ‘Ripa di porta Ticinese’, but the pitch was often in such dreadful shape that they soon moved to Arena Civica for their winter home matches. Back then, the stadium was also used for such events as pigeon shoots and naval battles, too.

The Nerazzurri moved to ‘Via Goldoni’ in 1913, but even then, their biggest home matches were played at Arena Civica due to its larger seating capacity. Their 1920 and 1930 league titles, in fact, were both clinched at this oldest of grounds.

When a stand at Via Goldoni collapsed, Arena Civica became Inter’s permanent home from the 1930-31 season until 1947, when they moved into the Giuseppe Meazza, otherwise known as the ‘San Siro’.

The ground, which also hosted the Italian national side’s first match, a 6-2 triumph against France in 1910, today hosts Prima Categoria outfit Brera Calcio, as well as a variety of events from rugby matches, athletics events and concerts.

Similarly old grounds across the continent include Italy’s Stadio Luigi Ferraris, which opened in 1911 and housed solely Genoa until 1946, when Sampdoria became co-hosts, and a plethora of stadiums which opened in 1923, namely Valencia’s Mestalla, Villarreal’s El Madrigal, Parma’s Stadio Ennio Tardini and Braunschweig’s Eintracht-Stadion.

One thought on “The Oldest Football Stadiums in the World”