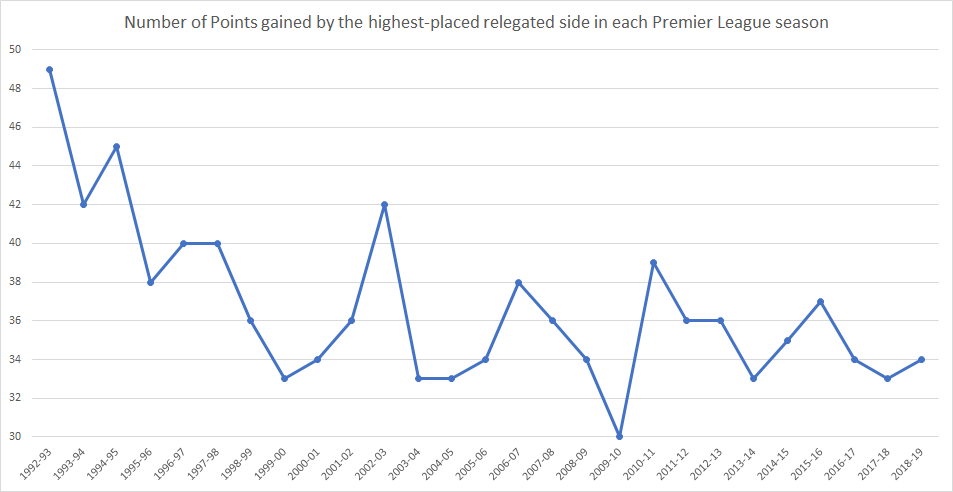 It’s the magic number for managers of each of the Premier League’s perennial firefighters. Get to 40 points, they say, and you’re safe from relegation.

Indeed, even in Leicester’s incredible title-winning season, Foxes manager Claudio Ranieri, knowing his team were pre-season relegation favourites, continually reiterated the need to reach 40 points to the point where it was as if he was making the comment in jest.

Ranieri could be forgiven for not be the only one, though.

Steve McClaren spoke of parties being thrown by his assistant at Middlesbrough, Steve Harrison to celebrate reaching the milestone, while the phrase ‘we need to get to 40 points’ almost became catchphrases for escapologists like Tony Pulis and Sam Allardyce.

But, in reality, just how often do teams need this many points to survive in England’s top-flight?

Is It Just a Nice Round Number?

There’s certainly an argument for that being in the case in the modern day but, in fact, 40 points was not enough to survive in the Premier League’s early days.

During its first three seasons, from 1992-93 to 1994-95, 22 teams entered the league, with three relegated in the first two years and four in the final campaign. In each year, 40 would have sent you down.

Sure, there were four more games a season back then, but even still, the numbers were staggeringly high.

Never more so than in the first season, when Oldham Athletic beat Crystal Palace to survival by having a superior goal difference of just two. Both finished on 49 points, which would be comfortably enough for a mid-table, if not top half, finish nowadays.

The two years after were similar. Sheffield United occupied the ‘highest’ relegation spot in 1993-94 despite finishing with 42 points, while Palace took this place a year later with 45. No 40-point parties in those days, then.

But since the Premier League became a 20-team league in 1995, only three of the following 24 seasons have seen a points total of 40 of more needed to stay up.

Nowadays, West Ham United’s 42-point relegation in 2002-03, for instance, seems as cruel as it does unfathomable.

Somewhere in the mid-30s has tended to do the trick more often than not, certainly in recent years.

In fact, since that 2010-11 season when both Blackpool and Birmingham were relegated on 39 points, the largest total amassed by a relegated side has been Newcastle, who went down on 37 under Rafa Benitez in 2015-16.

In each of the three campaigns since, either 34 or 35 has been the absolute minimum to see a team survive. Maybe these numbers just don’t have quite as nice as ring to them as 40 does, then.

The smallest margin of survival remains Wigan’s incredible escape in 2006-07, when they beat Sheffield United in their own back yard on the final to stay up at the Blades’ expense.

Why The Drop-off in Points?

Well, the obvious first reason is the downsizing of the league by two teams in 1995. If there’s four less games to play, then there’s 12 less points on offer. That’s a fair amount, especially in the teams in the lower echelons of the league.

But there’s an underlying issue plaguing the Premier League for a few years now, in that the gap between the so-called ‘big six’ and much of the rest of the division has become a chasm.

Never was this exemplified more than in 2018-19, when the bottom three – Huddersfield Town, Cardiff City and Fulham – took a grand total of four points from a possible 108 between them against the top six.

And in the same season, champions Manchester City became the first team to face no shots on target from their opponents in consecutive away games since – Manchester City, the year before.

Indeed, it seems that the strengthening of the big hitters is increasingly diluting the quality further down the table, the Premier League’s competitive edge slowly eroding away as a result.