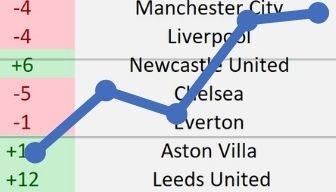 We’ve all had those debates with fans of other clubs.

“We’re bigger than you – look at our stadium compared to your shed!”

“How are you a big club? You’ve not won anything in X years!”

The debates are endless and neither party is going to convince their counterpart that the club in question is bigger or smaller than they say it is.

But one of the really popular facts to throw at other fans in these debates is the how well-supported a club is.

So, let’s imagine a world where the English Football League system was reorganised… based on average attendance.

If we were to use last season’s numbers, there would be a lot of promotions and relegations. With some clubs climbing/falling two leagues or more.

Exactly Where They Should Be?

Of all of England’s 92 Football League clubs, just three teams finished in exactly same league position as their attendance ranking. Tottenham would finish fourth in the Premier League in both worlds, while Norwich would top the Championship, while Middlesbrough would suffer eternal play-off near misses with a seventh place Championship finish.

How Would the Premier League Look?

Well, after a difficult few years for the pair, Manchester United and Arsenal would return to challenging it out for the Premier League title, while West Ham would achieve a shock third-place finish and play in the Champions League for the first time.

Despite probably being the two best sides in the world football right now, Man City and Liverpool would have to deal with awkward Thursday night fixtures in the Europa League.

Mike Ashley should also look away now, as Newcastle would sore up to seventh place. Aston Villa, Leeds and Sunderland would also enjoy cushy mid-table Premier League returns. Plus, there’d be a relegation reprieve for Neil Warnock’s Cardiff, would finish 14th.

What do you think? How do you judge how big a club is? And is fan base one of – if not the – biggest consideration? Comment below.

Tackling is one of the most debated topics within football as players, coaches, pundits, and supporters all have different views on whether a specific challenge is a tackle or a foul. Although...

The Tour de France is one of the most famous races in the world. It's right up there with the Olympic 100-metre final, the Grand National and the Monaco Grand Prix as the races most people watch,...