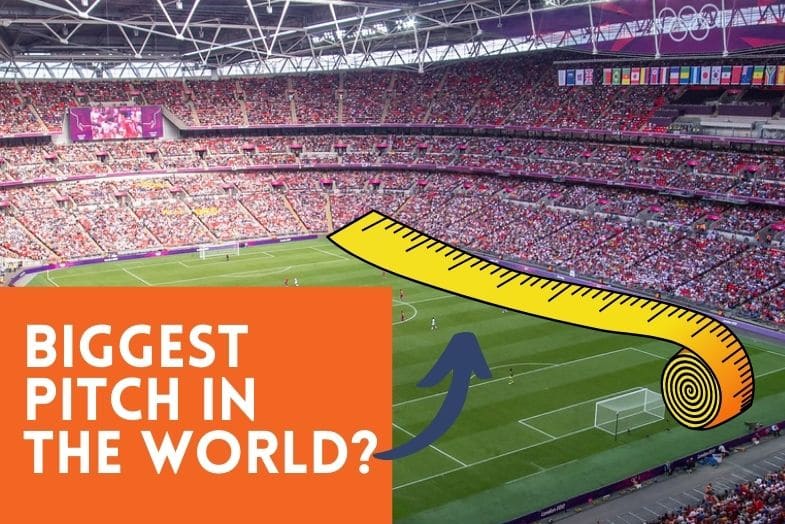 Football is a universal game but not all players are equal, much to our bitter disappointment. Cutting it at the elite level in football comes down to marginal differences, with teams looking for ways to make those gains wherever possible.

Some might argue that a telling difference in a football match is the size of the pitch. If one team is familiar with playing on a large or small pitch it could throw the opposition off.

This got us wondering, is Wembley’s pitch bigger than others? It’s known as one of the largest pitches in world football but is it really? Let’s take a closer look at how big Wembley’s pitch is and how it compares to others.

What Size Pitch is Wembley?

Wembley Stadium’s pitch measures 115 x 74 yards, making it one of the biggest playing surfaces in England. Playing on such a large pitch can give the home side an advantage if the opponents aren’t used to it. Or, if they are not as fit or athletic as England’s players.

The large pitch allows England’s players to express themselves with as much freedom as possible. International minnows struggle to play against England at the best of times but throw in a huge pitch and it’s a tough ask for them.

Club teams also have to adapt to playing on Wembley’s pitch during cup finals and semi-finals. When Tottenham Hotspur spent a Premier League season at Wembley while White Hart Lane was being demolished, there were questions about how it would affect the team. After all, Wembley’s pitch is huge so it would change how Tottenham played.

Considering how Spurs have played since leaving Wembley, perhaps it could be argued that a different size pitch helped them out. Tottenham finished third and fourth in the Premier League seasons they spent at ‘The Home of Football’. Since then, it has been a struggle to get back into the Champions League places for Spurs.

Is Wembley’s Pitch the Biggest in the World?

Wembley boasts a large playing surface and, should it be used to its maximum, it might be the largest. However, Football Association and FIFA rules mean Wembley’s pitch is restricted. The Estadio Manuel Martínez Valero belonging to Spain’s Elche has a larger pitch, measuring 118 x 77 yards.

While the pitch dimensions are restricted, Wembley has the possibility of using a pitch that is over 140 yards long without those rules. This is why it was an ideal stadium for overseas American football matches in the NFL, before the Tottenham Hotspur Stadium became the venue. Football pitches are big but they aren’t American football big.

Is Wembley the Biggest Pitch in England?

Although it is a large pitch, Wembley doesn’t have the honour of being the largest in England. The biggest pitch in England can be found in Manchester, at the Etihad Stadium. Manchester City’s pitch measures in at 116 x 77 yards, which is a shade larger than Wembley.

According to the Wembley Stadium website, one person cutting the grass walks 12 miles. It’s certainly a large pitch at Wembley and defending teams have to do a lot of running.

Such a large pitch allows teams that control possession more chances to find space against tightly-packed defences. The large pitch works both ways, though, and it gives counter-attacking teams plenty of space to run into when they break.

Is Wembley Pitch Bigger Than Others?

Wembley is bigger than many famous pitches in football. Take Anfield as an example, which measures in at just 110 x 75 yards, making it one of the smallest pitches in the Premier League. However, Wembley’s pitch is smaller than the playing surfaces at Old Trafford, the Amex Stadium and Molineux.

All of these pitches are larger than Wembley’s, although only by a yard where Molineux is concerned (116 x 74 yards). Old Trafford’s pitch dimensions are 116 x 76 yards while the Etihad pitch measures 116 x 77 yards.

Although they might look the same on TV, not all Premier League pitch dimensions are the same. That’s also true of football pitches on the continent, with differences occurring across the grounds. Wembley’s pitch dimensions (115 x 74 yards) match those of iconic stadiums like the Camp Nou, Santiago Bernabéu and San Siro.

Wembley’s pitch is a mixture of artificial and real grass. It is 97% real grass and 3% artificial, which makes it a hybrid pitch. Wembley, like many of the top pitches around the world, uses synthetic grass to ensure the playing surface is as perfect as possible.

Premier League pitches are no longer the muddy bogs they once were. This is largely down to better irrigation systems and the use of hybrid pitches. While you will still find plenty of natural grass on a Premier League pitch, it’s commonly woven with artificial materials for the best results.