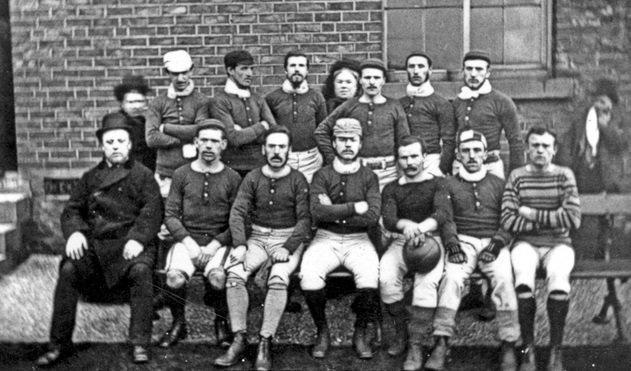 Contrary to popular belief that Notts County are the first football club to form that are still around today, this accolade, in fact, belongs to non-league outfit, Sheffield FC.

But just how old are they, and what’s their story?

When Were Sheffield FC Formed?

‘Sheffield Club’, as they are known in the Yorkshire city, were founded in 1857, meaning they outdo Notts County by five years.

In 1855, members of a Sheffield cricket club arranged ‘kick-arounds’ without any official rules to go by. These games continued over the next two years until, in May 1857, two of their members, Nathaniel Creswick and William Prest, went on to form the Sheffield Football Club. With cricket a ‘summer sport’, they felt football would be perfect for keeping them fit and active during the winter months.

The club’s first meeting was held on October 24, 1857 at Parkfield House in Highfield, Sheffield. Initially based on a field next to a greenhouse, Sheffield FC games were played among club members in the format of ‘married vs singles’ or ‘professionals v the rest’ until 1860, when Hallam FC, the world’s second oldest club, formed elsewhere in the city. The two teams still face each other in the ‘Rules derby’.

The Oldest Football Club in England… and the World

These ‘Rules’ referred to the ‘Sheffield Rules’, which were the first detailed set of football regulations to be published by a club itself, as drawn up at their AGM on October 21, 1958, and published the following year. When the English Football Association (FA) was founded in 1863, it adopted and altered this code of conduct.

Don’t just take our word for them being the first of their kind, either – Sheffield FC is officially recognised by FIFA and the FA as the world’s oldest club. In 2007, they were inducted into the English football hall of fame, too, to commemorate their 150th anniversary.

It was not until January 1865 when the club played its first fixture outside Sheffield against Nottingham, playing an enormous eighteen-a-side game under the ‘Nottingham Rules’. By then, the club had decided only to play teams outside Sheffield to find greater challenges.

On 31 March 1866, Sheffield played the first inter-city match, facing a London City under FA rules at Battersea Park. The eleven-a-side game was won by London by two goals and four touches down to nil, with the Sheffield players’ heading of the ball leaving their opposite numbers and fans in hysterics.

Besides headers, Sheffield FC were also involved in a number of other innovations into the sport. their rules, including the use of a solid crossbar instead of rope, free-kicks, corners and overhead throw-ins.

They entered the FA Cup for the first time in 1873, and reached the fourth round in 1877-78 and 1879-80, but fell away in the mid-1880s after the introduction of professionalism in football, with Sheffield’s amateurs unable to compete. As a result of such enormous disparities, Sheffield suggested to the FA the creation of the Amateur Cup, a competition exclusively for semi-pro clubs. It was inaugurated in 1893, and won by Sheffield in 1904; arguably their greatest on-pitch achievement, as well as FA Vase runners-up in 1977.

Where Are They Now?

Having found themselves really at the depths of English football, competing in county-wide leagues almost constantly until the mid-2000s, Sheffield have slowly but surely making their way back up.

Since 2007-08, they have competed in the Northern Premier League Division 1, the eighth tier of the pyramid, having failed to win promotion on each of the three occasions they have reached the play-offs since then.

Sheffield also don’t actually play in Sheffield anymore. Having initially found a home at Sheffield United’s Bramall Lane, before moving to four different grounds all based in the city, they relocated to Dromfield, Derbyshire in 2001.

Since then, the Coach & Horses Ground, holding little more than 2,000, has been their home, although it was revealed in March 2019 it was revealed that the club was in talks with The Sheffield Transport Sports Club (STSC) to move back to its home city, after plans to relocate to the Olive Grove sports ground in Heeley collapsed in 2016.