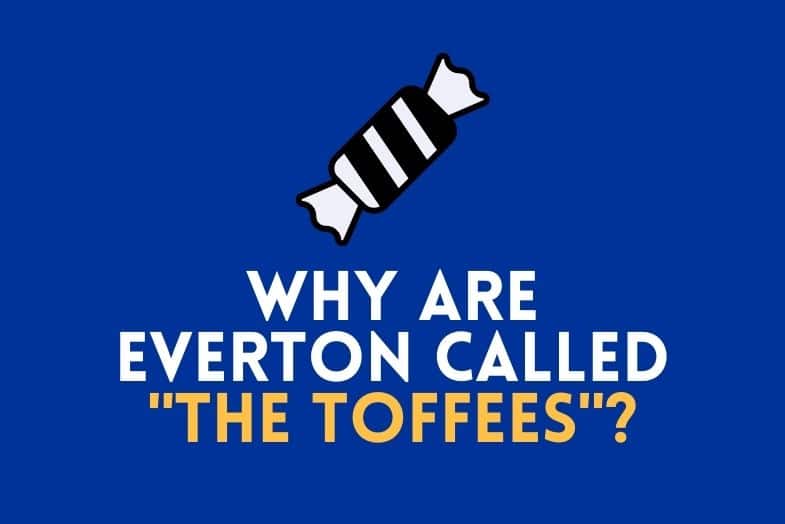 Few clubs in England can boast the history that Everton Football Club has. One of the founding members of the Football League in 1888 and league champions nine times, Everton have competed in England’s top flight for 118 seasons in all.

A club of that stature will obviously have been called several things over the years by their own fans and opposition supporters. So, having previously explored why Everton FC are called “Everton” in the first place, it’s time to look at why Everton got the unusual nickname “The Toffees”, and the equally unusual “sweet-shop” rivalry behind the name.

Among their fans, you may be surprised to hear that Everton’s most common nickname is “the Blues”, with the shout of “Come on you Blues” (or “COYB” when written down) very commonly heard at their home ground Goodison Park.

And while Evertonians may sometimes refer to the team as “The Toffees”, it’s mostly those outside the club that use this particular nickname most frequently. Indeed, it’s essentially guaranteed that following any Everton defeat you will see the clichéd “Toffees Come Unstuck at [Opponent]” headline in some newspaper or other.

So why are Everton called “The Toffees”?

Why Are Everton Called “The Toffees”?

Everton became known as “The Toffees” because the club’s original ground (then at Anfield) had two toffee shops nearby: “Ye Ancient Everton Toffee House” and “Mother Noblett’s Toffee Shop”, which was much closer to Goodison Park.

The Toffee House was the pride and joy of Molly Bushell, who is said to have invented Everton Toffees, and many early Evertonians would stop off at the shop while on their way to watch their first matches.

Everton moved ground away from Anfield to Goodison due to a rent dispute, and there soon developed a rivalry between toffee shops when Mother Noblett opened her own near Goodison and supposedly invented “Everton Mints” in a bid to rival Bushell’s toffees.

The Toffee House was located near the Queen’s Head Hotel, in which early club meetings took place, and opposite the Everton Lock-Up that has featured on the club’s crest since the 1930s.

Yet these two sweets were entirely different from one another. Mother Noblett’s mints had a toffee centre, with a hard sugar shell with black and white stripes, in an apparent nod to the colours previously worn by Everton. The toffees, meanwhile, were made from boiling raw sugar with water before adding butter and essence of lemon (although some old recipes suggest that ginger was also added to give them a more unique flavour).

Either way, the “Toffees” nickname seemed to catch on, and Everton are still nicknamed as such to this day. Their mascot, the Toffee Lady, offers the sweets to the Goodison crowd before home games.

Everton Mints are not necessarily named after Everton FC, more likely the Everton area in which they were invented, but the use of “Everton” in their name was a clever marketing ploy by their creator Mother Noblett.

Ye Ancient Everton Toffee House was a sweet shop run by Old Ma Bushell, famous for her Everton Toffees. In the early years of the club, Old Ma Bushell became a must-visit stop-off for hungry fans making their way to watch Everton matches firstly at Stanley Park, then Priory Road and even as they made their way to Anfield (which was Everton’s ground before it became Liverpool FC’s).

However, Everton moved to Goodison, only a mile from Anfield, in 1892, and Mother Noblett opened her premises near Goodison Park and gained increasing popularity. Hoping to snatch custom from her rival Old Ma Bushell, Mother Noblett invented Everton Mints.

We are used to intense footballing rivalries between clubs, managers, players and of course the fans. However, the Everton “sweet-shop rivalry” might be the only example of its kind in football!

Who is the Everton FC Toffee Lady?

The Everton FC Toffee Lady is a longstanding tradition where someone, usually a young girl nowadays, is picked to hand out toffees to the crowd before matches at the club’s home ground Goodison Park. It dates back to a rivalry between two sweet shops in Liverpool in the late 19th century.

Old Ma Bushell and Mother Noblett ran toffee shops popular with the crowds heading to see Everton’s matches, and both were extremely keen to cash in from the huge number of people passing their doors.

After Mother Noblett invented the famous Everton Mints, Ma Bushell had a brainwave – she could promote her Everton Toffees inside Goodison Park itself.

Enlisting the help of her granddaughter Jemima Bushell, Old Ma gave Everton fans the opportunity to enjoy the toffees pre-game by making the girl dress in her best finery (including a large bonnet) and offer the fans individually wrapped Everton Toffees from a basket – in other words, a marketing masterstroke.

The tradition continues to this day at Everton’s home matches at Goodison Park, further reinforcing both the club’s historical status as the “Toffees” and also one of the strangest nickname backstories in football anywhere in the world.