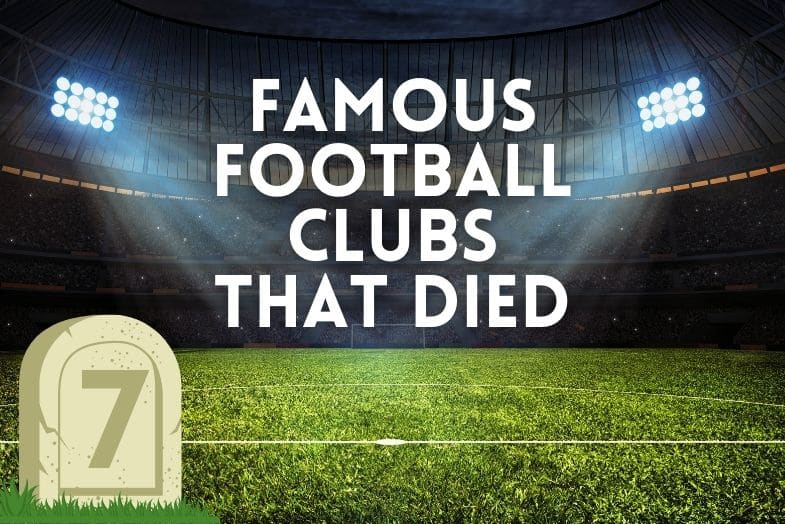 They say that life is like a roller coaster. Well, no one can testify for the accuracy of this statement better than a sport fan who spends a lifetime following the highs and lows of their beloved team.

The ups and downs are a normal occurrence in the world of football. It’s not uncommon to see a top European club with a cabinet full of trophies falling from grace and spending years or even decades wandering in the wilderness of midtable. Others even end up experiencing the sour taste of relegation.

But as they say, after every winter there’s spring, and the major sides almost always end up finding their footing again while building upon their glorious histories.

Nevertheless, not everyone gets to be so lucky, as some falls can simply be eternal, and instead of seeing light at the end of the tunnel, these clubs will perish in the darkness.

But why do football clubs get liquidated? And who are the most famous clubs to cease from existence?

Why Are Football Clubs Liquidated?

Football clubs are always under the threat of suffering a financial crisis. Whether due to bad management, poor results on the pitch or the general economical situation, bankruptcy is never too far away from a sporting association – especially those who possess large wage bills.

As explained by Ian Liddle for Farleys.com, football clubs are put into administration when they can no longer pay their bills.

Therefore, a certain administrator is put in charge, taking care off all financial aspects within the club. Their main role would be paying off the creditors using the company’s assets.

When Serie A club Parma went bankrupt in 2014, they even had to sell their benches and furniture to pay a small slice of their outstanding debts.

However, being put into administration isn’t always the official death of the team. As we’ve seen in many cases, a phoenix club is sometimes founded to act as the recognized heir of the bankrupt side, as we’ve seen in several cases, including Napoli, Fiorentina, Parma and Glasgow Rangers.

But as we mentioned before, it’s not always a happy ending, as some clubs fail to relaunch themselves and simply cease to exist, mostly due to their failure in finding new investors that can save them from the abyss.

In this section we’ll take a closer look at seven famous clubs that no longer exist. Some were even domestic champions, others had memorable stories of their own, but they all share the same sad ending.

Let’s begin with the most recent. Thanks to William Shakespeare’s “Romeo and Juliette”, the city of Verona had always been associated with tragic endings.

The vast majority of the locals support Hellas Verona, a club that prides itself with a famous league triumph in 1985.

Since its founding in 1928, Chievo spent the majority of its existence in the looming shadow of Hellas who taunted their rivals by claiming that “Donkeys will fly before Chievo plays in Serie A”.

In 2001, manager Luigi Del Neri led Chievo to Serie A, prompting the fans to proudly adopting the nickname of the “Flying Donkeys”.

While all observers were expecting the yellow side to drop back to Serie B, they instead managed to qualify for the UEFA cup, and even played in the Champions League qualifiers in 2006.

But at the end of the day, Chievo’s story was destined for a sad end, as the club was expelled from Serie B in 2021 due to outstanding tax payments following the financial crisis mostly caused by the Covid-19 pandemic.

Although club legend Sergio Pellissier tried to attract some investors in order to relaunch a phoenix club, his attempts were fruitless, and Chievo’s colours no longer appear in the Italian football tiers.

When scrolling through the winners list of Europe’s top 5 leagues, one would notice that some clubs remain as powerful as they were in the past, while some of the former champions now find themselves stuck in the lower leagues.

However, only one club (from the top 5 leagues) ceased to exist despite having a domestic league in its trophy cabinet, and this happens to be CO Roubaix-Tourcoing.

The French club was founded after the Second World War in 1945 as a result of a merger between three clubs, and two years later, they were crowned as league champions in France.

Nonetheless, the three original clubs decided to restore their independence, and one by one, they left the union and were rebranded as US Tourcoing (1956), RC Roubaix (1962) and finally Excelsior (1970) putting an end to the former champions.

Sports fans recognize Wimbledon as the home of the most prestigious tennis tournament. However, football fans can recall a time when the region’s club shockingly lifted FA Cup back in 1988.

Since the founding of the English Premier League in the nineties, Wimbledon FC had been a part of the league, until its relegation in 2000.

Due to issues within their own stadium, the club had to hop around different temporary venues, which ended up lasting for over a decade.

Eventually, the the management decided to relocate and subsequently rebrand the club as Milton Keynes Dons, a move that was expectedly unpopular with the fans who refused the move and ended up forming their own club, called AFC Wimbledon.

Therefore, the legacy of Wimbledon was split into two, but both sides have thus far failed to reignite the glory days for the old club.

Once upon a time in Amsterdam, the city had a second club that almost rivalled the great Ajax. In 1972, Blauw Wit and DWS merged to form FC Amsterdam.

The black and red club finished fifth in the Eredivisie in its first season, and even managed to reach the quarter finals of the UEFA Cup in 1975.

Nonetheless, the club was relegated to the second division in 1978, and the majority of their fans no longer turned up to the stadium.

During an era when box office revenues were the most significant income for football clubs, FC Amsterdam were unable to survive for too long, and 1981/82 turned out to be their last active season.

While the New York Cosmos set the East Coast on fire by signing Pele, Los Angeles Aztecs was the West Coast’s answer. The Californians brought some of the biggest names of the time to the new continent, and it’s enough to mention Yohan Cruyff and George Best, and were even partially owned by Sir Elton John at one point.

The Aztecs eventually dissolved after going bankrupt in 1982.

Since the creation of the first true professional league in China back in 1993, Dalian Shide proved to be the biggest force in the country, winning 8 league titles between 1994 and 2005.

But, following a negative period that saw their results on the pitch taking a turn to the worse, the club was bought by a new owners in mysterious and confusing circumstances back in 2012. Subsequently, Dalian Shide merged with another club called Dalian Aerbin, bringing an end to one of China’s most celebrated teams.

Amica Wronki was founded in 1992, and it didn’t take them too long to cement themselves amongst the elite in Polish football, winning the domestic cup three times in a row between 1998 and 2000 and making several appearances in the UEFA Cup.

Unfortunately for the fans, the club owners (Amica company) decided to merge with Lech Poznan in 2006. The company considered Wronki to be a small town in comparison with Poznan which allows them to promote their brand in a larger market.

Amica Wronki tried their luck for another season with a squad consisted of youngsters, but eventually decided to disband in 2007 due to poor results.