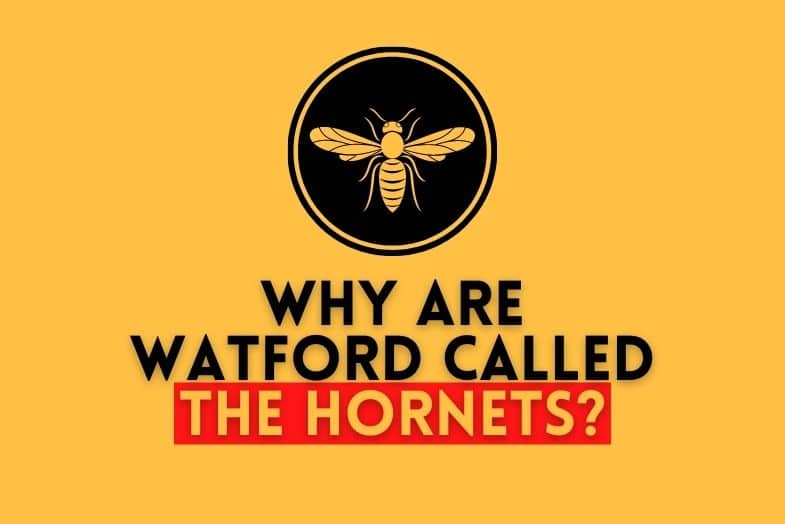 Football club nicknames always have stories behind them. But others are more interesting than others. But have you ever wondered why some team kits seem to match up with their nicknames? Sure, “The Blues” or “The Whites” doesn’t take much imagination.

Why are Crystal Palace called The Eagles or Brighton called Albion Seagulls?

What about the Hornets of Watford FC? What came first, the chicken or the egg? The kit or the nickname?

Why are Watford Nicknamed ‘The Hornets’?

During its history, Watford has undergone many kit changes. One of such changes occurred in the 1959-60 season when the kit was changed to gold shirts and black shorts. And after a popular vote by the supporter’s club, the nickname was changed to ‘The Hornets.’

Watford’s initial nickname was ‘The Brewers’ referring to Benskin’s Brewery. The brewery owned the leasehold of Vicarage Road where the club has played since 1922.

In the 1920s, Watford played in blue shorts and socks with white shorts. During this time they were known simply as ‘The Blues’

Why Do Watford Have Z-Cars Theme?

The Z-Cars theme tune was chosen by manager Bill McGarrey who was a big fan of the TV series. Bill chose the song for his players to exit the tunnel after a defeat to Peterborough in 1963. The team then went on a 29-match unbeaten run and have played the tune since!

Z-Cars was a British TV police drama that ran from 1962 to 1978. And Watford wasn’t the first to enter the pitch to the Z-Cars theme. After winning the league in the 1962-63 season, Everton began walking out to the theme tune.

The Z-Cars theme is based on a traditional folk song ‘Johnny Todd,’ that every Liverpudlian would hear and learn as a child. Fritz Spiegl and Bridget Fry arranged the theme for the commercial release.

Who Are Watford’s Rivals?

Watford has a longstanding history and rivalry with Luton Town. The two sides clashed since their early days in the Southern League. Watford has also developed a rivalry with Bournemouth and maintain minor rivalries with London-based clubs like Arsenal and QPR.

Watford and Luton met regularly in the early 20th century. Afterwards, the two clubs were separated by divisions and rarely played from 1937 to 1963. But the rivalry levelled up following a heated match in 1969 when three players were sent off.

The two clubs have spent most of their recent time in different divisions. But in the 2020-21 season of the Championship, the clubs split two meetings, each with a score of 1-0 to the home side.

Why are Watford and Bournemouth Rivals?

The rivalry between Watford and Bournemouth goes back to the 2014-15 campaign for the title of English Championship. On the last day of the season, Watford conceded a last-minute goal effectively gifting the league title to the Cherries. Both sets of supporters have held a grudge since.

While competing all season for the league title, the supporters escalated things by taking to social media. Watford supporters were especially vocal online about “south-coast favouritism” every time Bournemouth was awarded a penalty.

Football only exists because of the fans. Clubs can’t control everything that happens on the pitch. But for the things they can control, it can pay dividends to listen to fans. Premier League clubs in debt like Watford are gonna need their supporters to help them climb out of debt.

And because of that, we can watch The Hornets play in their iconic gold and black kits at Vicagare Road!