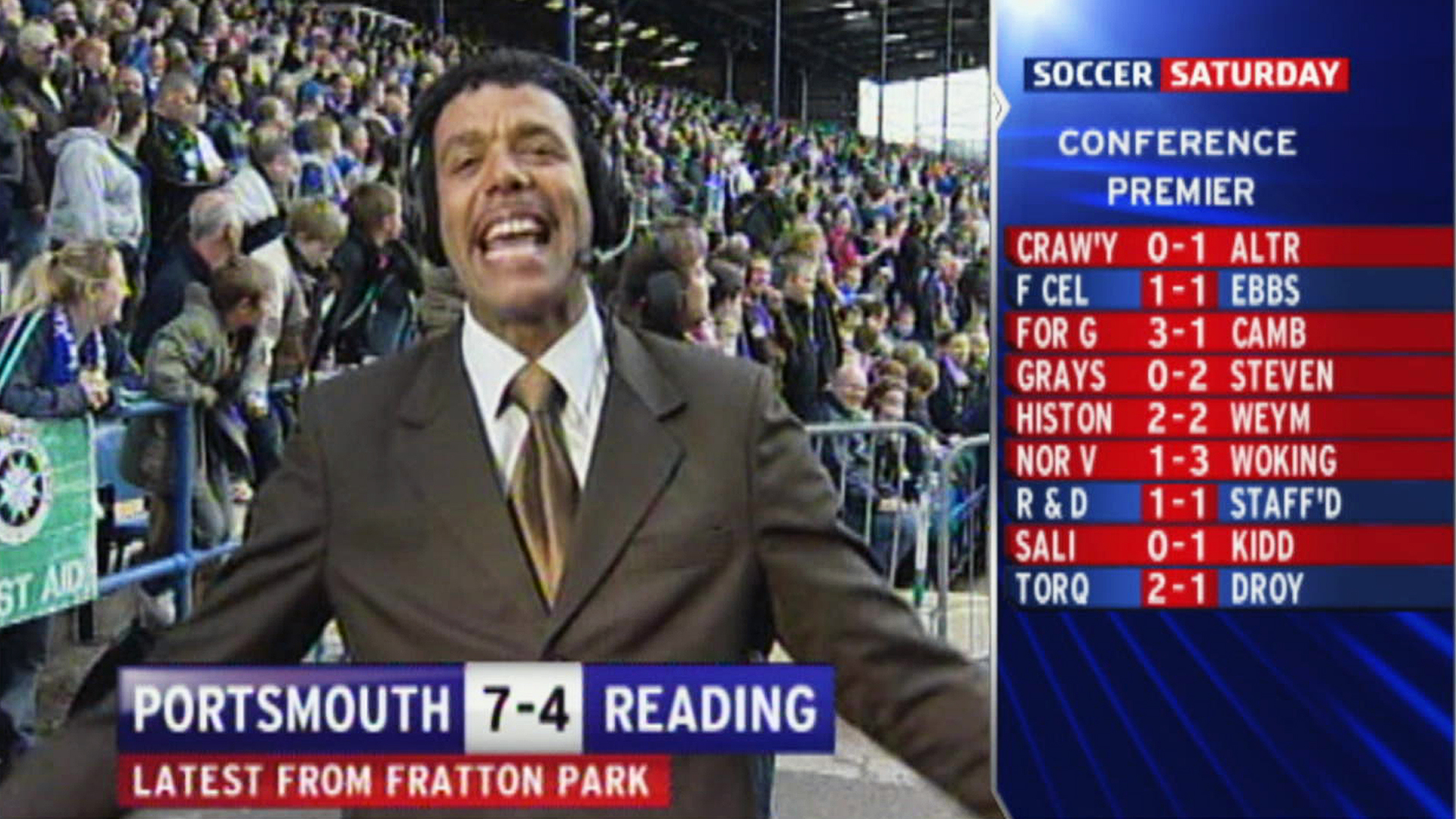 Much as managers understandably hold a clean sheet in high regard, there is nothing quite like a great flurry of goals, at least from the neutral’s point of view.

Before 2007, the Premier League had never seen a game with more than nine goals in it, but since then, it’s seen double figures be reached six times. Let’s revisit them in all their carefree, thrill-a-minute glory:

Most Goals in a Premier League Game

The record-breaker, Reading’s trip to Fratton Park in the opening weeks of the 2007-08 remains the highest-scoring Premier League game in history, with the nets bulging 11 times in 90 minutes.

Pompey’s Zimbabwean talisman Benjani Mwaruwari was the hero, bagging a hat-trick, though at half-time, the score was merely 2-1 to the home side.

Reading equalised shortly after the break, having been 2-0 down earlier, before Portsmouth ran riot, going 5-2 up with 15 minutes to play.

A Shane Long reply, a Sulley Muntari penalty and an own goal for each side later, Mark Halsey would call time on one of the most incredible matches in the history of the league, with six strikes coming in the match’s final 20 minutes and two in stoppage time.

Just three months later, it looked as if the Royals were on the way to again break the record for the most goals in a Premier League game, as their defeat at Spurs joined their loss at Portsmouth in being the only two Premier League games to reach ten or more goals.

And again, it was a relatively mild scoreline at half-time; one goal each inside the first 16 minutes saw the sides go in at half-time with the game deadlocked at 1-1. But it was after the interval that Tottenham, particularly Dimitar Berbatov, took charge.

Reading had gone 2-1 up through centre-back Ivar Ingimarsson, and then 3-2 and 4-3 up both thanks to Dave Kitson, but goals in the final 15 minutes from Steed Malbranque, Jermain Defoe and Berbatov, his fourth of the afternoon, sealed a stunning win for Spurs.

Reading were relegated at the end of this season, with these two heavy defeats contributing to them finishing with the second-worst defence in the league, surpassed only be 11-point haulers Derby.

Spurs were involved in another ten-goal game two years later, as they became only the second team, after Manchester United, to score nine in a Premier League match.

Once more, the first half was hardly littered with goals; a ninth-minute Peter Crouch effort meant Tottenham were one up at the break, but they were utterly rampant in the second half.

Defoe scored an unbelievable seven-minute hat-trick, during which time Wigan’s Paul Scharner replied with a mere consolation, before going to net two more to become only the third player in the league’s history to manage five goals in one match.

An Aaron Lennon goal, followed by three goals from the 87 minute onwards from Defoe, David Bentley and Niko Kranjčar, completed the rout, with Wigan refunding the travelling fans’ tickets as an apology.

They would survive under Roberto Martínez that season, finishing 16th, but would suffer another eight-goal defeat on the final day, losing 8-0 at champions Chelsea, with their 79 goals conceded exceeded only by relegated Burnley.

One of the most iconic matches in Premier League history, another ten-goal thriller saw Alex Ferguson’s United side inflict a brutal demolition job on Arsène Wenger’s Arsenal.

United were 3-1 up by half-time thanks to goals from Danny Welbeck, Ashley Young and Wayne Rooney, who would go on to bag a hat-trick, but Arsenal, who named several youngsters including Armand Traoré, Carl Jenkinson and Francis Coquelin were utterly trounced.

They recovered well thereafter, though, finishing third, one place behind United, who lost the title to City on the final day through goal difference thanks to their incredible last-gasp win over Queens Park Rangers.

The next season, Arsenal were on the right side of a ten-goal Premier League game, though by battering Alan Pardew’s Newcastle 7-3.

Exactly five years to the day since Spurs’ 6-4 win over Reading, North London saw history repeat itself across town; with the game deadlocked at 1-1 at the break, Arsenal ran riot in the second half.

Theo Walcott hit a hat-trick, while assisted another two, and though Newcastle equalised three times, twice through Demba Ba, and once through Sylvain Marveaux, it was ultimately in vain, as Walcott’s three, Olivier Giroud’s brace, and further strikes from Alex Oxlade-Chamberlain and Lukas Podolski secured an emphatic win for the Gunners.

It was supposed to be Sir Alex Ferguson’s perfect swan song. Having announced his retirement ten days earlier, this was his final game in charge of United, with a 20th league title already sealed weeks earlier.

And in the first half, it looked like being exactly that, as Shinji Kagawa, a Jonas Olsson own goal and Alex Büttner saw the Red Devils go in 3-1 up at the break.

The Baggies got another back through Romelu Lukaku but were three goals down again by 63 minutes thanks to strikes from the league’s top scorer, Robin Van Persie, and Javier Hernández.

But a sensational last ten minutes saw Lukaku and Youssuf Mulumbu both score inside less than 60 seconds, reducing to deficit to one, before the Belgian completed his hat-trick with a scrambled effort shortly after.

It meant that Ferguson made history once more, if not exactly the sort he would have wanted, presiding over the first 5-5 draw in the Premier League.