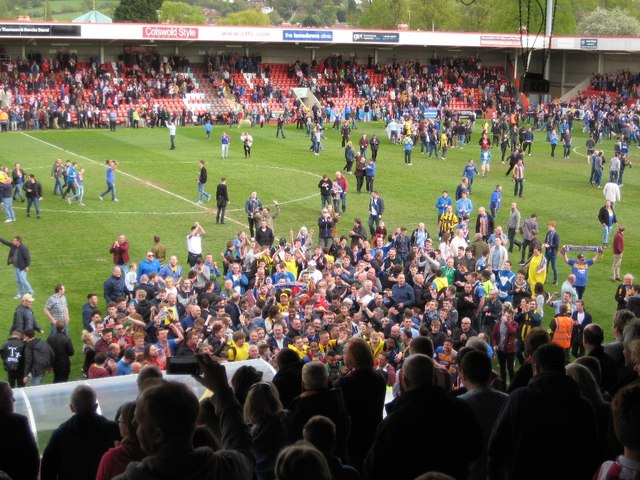 Not every team has their place in the football pyramid set in stone. The Premier League may have six ever-presents, for instance, but elsewhere, things are less certain. Clubs can shoot up the divisions as quickly as others begin an irreversible nosedive.

Let’s take a look at the five most back to back promotions in football history, as well as some more impressive rises through the leagues (if not via successive promotions):

Only founded in 2012, Japanese outfit Iwaki FC began their surge through the tiers in 2015, by which time Under Armour had joined the club to support its rise.

In November 2016, the club opened a new training field, while a club-house followed in May 2017. They have won every league they have been in since 2015, from the Fukushima Prefectural League Division 3 (ninth tier) through to the Tohoku League Division 1 (fifth tier) last year.

With an ambition of ‘making Iwaki the central football-city in Tohoku’, their success hasn’t stopped in the league, though. They were also champions of the 2016 National Club Team Football Championship Tournament, winning the final 9-0.

An amateur club plying its trade in regional leagues for much of its life since forming in 1970, everything changed for SV Rödinghausen when they gained the financial backing of Horst Finkemeier, the retired owner of a kitchen manufacturing business.

Suddenly, not only did Rödinghausen shoot through the leagues, but they also opened a new €2 million stadium in 2011. Since 2014, they have played their football in the Regionalliga West, the semi-professional fourth division in Germany.

They did win the Regionalliga West in 2019-20, a year after being crowned Westphalian Cup champions, but were denied promotion to the third tier, 3. Liga, for not applying for a licence to play in the league.

Also going straight from the ninth to fourth tier were Italian side Varesina Calcio, who were promoted in each campaign from the Terza Categoria Lombardy in 2011 to the Eccellenza Lombary in 2015.

Founded in 2010 after the teams of Castiglione Olona and Venegono Superiore joined together to make Varesina, they wasted no time in making their mark, winning promotion in each of their first five years of existence.

The fifth and final team to have won five straight promotions is Swedish outfit Dalkurd, who shot up from the eighth to the third tier of their national pyramid between 2005 and 2009.

The 2005 season was, in fact, their first in existence, having been founded by members of the Kurdish diaspora in September 2004. And like Varesina, all of their first five campaigns were crowned with promotions.

Dalkurd then went on to win promotion to Superettan, the second tier, in 2016, and Allsvenskan, the top-flight, in 2018, but were relegated from Sweden’s highest division after just one season.

In 2019, back in the Superettan, they also recorded an average attendance of a mere 168, the lowest in the league’s history.

More Impressive Rises Through the Leagues (If Not Successive Promotions)

Need help exploiting loopholes? Ask RB Leipzig for advice. Labelled the ‘most hated club in German football’ by the Guardian, the German side have risen from the fifth tier in 2009 and to the top of the Bundesliga today.

Founded in 2009, they purchased the playing rights of fifth-tier side SSV Markranstädt, before energy drink brand Red Bull bought their licence, and duly gave the club an entire facelift.

German clubs aren’t allowed names of sponsors or companies in their own names so Red Bull was shortened to ‘RB’, which translates roughly to ‘Leizpig lawn sports’.

This does not contravene the German ’50+1′ rule on fan ownership, whereby clubs are prevented from having external investors as majority shareholders.

How? Because, while Red Bull GmbH own 99 per cent of their shares, its formal power still lies with its association, RasenballSport Leipzig e.V.

With this added financial muscle, ‘RB Leipzig’ have earned four promotions in their 11-year history, going from the NOFV-Oberliga Süd to a top-six finish in each Bundesliga season since their promotion to the top-flight in 2016. And, of course, a Champions League semi-final last season.

Likewise, German side Paderborn, who were semi-pro until 2005, fell to the fourth tier, the Oberlgia Westfalen, in 2000. By 2014, they had achieved a fourth promotion since the turn of the millennium to reach the Bundesliga in 2014.

But their joy was short-lived; they were relegated straight back to the second tier, and then suffered a second successive demotion the following year.

Back in 3. Liga in 2016 for the first time since 2008-09, Paderborn spent just two years in the third division, before back-to-back promotions sealed a glorious return to Germany’s top table in 2019.

They would again spend just one year there, though, finishing bottom of the Bundesliga in 2019-20.

And in England, it’s hard to look beyond the remarkable rise of Bournemouth, from the doldrums of the Football League to Premier League regulars in the space of a decade.

Forced into administration and saddled with a ten-point deduction for debts totalling about £4 million, Bournemouth were relegated to League Two in 2007-08, but their money woes meant the EFL threatened to block their participation in England’s fourth tier that year.

Eventually, a compromise was reached, albeit with Bournemouth deducted 17 points, but when Eddie Howe took over with club still ten adrift and as the EFL’s youngest manager at 31, who knew what a white knuckle ride he was about to lead the club on?

A year later, they were promoted back to League One under Howe, who then left for Burnley during the following season. But when Paul Groves was sacked in October 2012, it paved the way for Howe’s return.

Not only did he ease lingering relegation fears that term, he led them to second place and another promotion, restoring Bournemouth to England’s second tier for the first time since 1990.

They would spend just two years in the Championship, though, before reaching the Premier League for the first time in their history in 2015.

Though admittedly aided by the backing of Russian owner Maxim Denim, Bournemouth spent a commendable five years in the top-flight, finishing as high as ninth in 2016-17.

And while it all came to an end with relegation in July 2020 and Howe ending his second spell at the club, they at least look well-placed for an immediate return under Howe’s former assistant, Jason Tindall.

One thought on “Which Team Had the Most Promotions in a Row?”