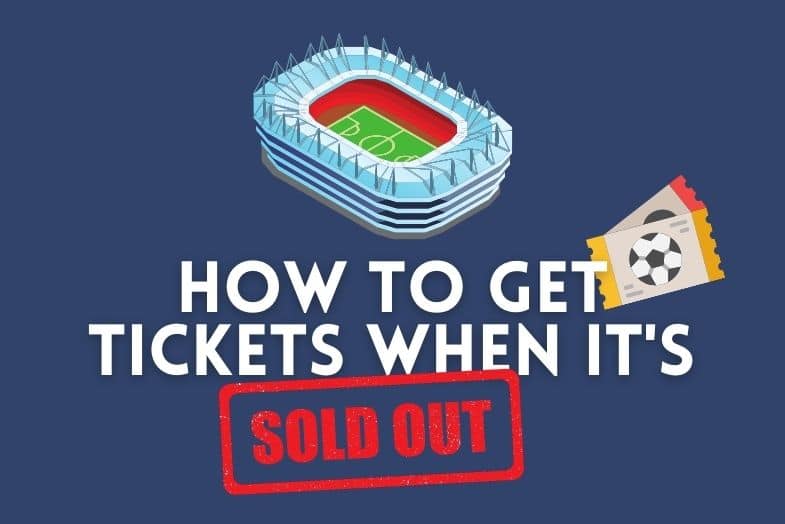 Most fans of Premier League teams know that getting hold of tickets to see their heroes play is tough. Tickets to the biggest games in football are like gold dust and fans looking to take in the grand occasions are often left missing out.

However, despite the difficulty, there are a few ways to get your hands on tickets to football matches, even those that are sold out. We’re going to take a look at the best ways to buy tickets for sold-out football matches and explore your options.

How Long Before a Football Match Do Tickets Go On Sale?

Tickets for home football matches are generally prioritised to members, particularly in the Premier League. Club members of those teams get the first refusal for tickets; often several weeks before the match. For the most popular teams, tickets may never reach general sale as they sell out too quickly.

Each football club sells tickets in its own way but most do so through their websites and official ticket offices. However, they each have different conditions supporters must meet to qualify for tickets.

For instance, Norwich requires fans buying home tickets to have purchased a ticket in the previous five seasons to qualify for games this season. Clubs will also provide any further information regarding any authorised ticket partners they may be working with.

Do All Premier League Games Sell Out?

Not all Premier League games sell out. In fact, it’s more common for games to not sell out in the Premier League. Some stadiums are just too large to fill out every time while other Premier League teams aren’t as popular and fans don’t turn out.

Considering both of those teams enjoyed successful and exciting starts to the 2021/2022 season it’s easy to see why fans flocked to the games. At the other end of the spectrum, Southampton only had an average attendance for the same period of 86.5%, according to Transfermarkt.

These figures make it all the more frustrating for fans unable to get tickets when there are seats available.

How to Buy Tickets for Sold Out Football Matches?

There are several ways to get into a sold-out football match. For starters, third-party ticket websites offer fans an opportunity to get into the ground of their beloved team. Other common methods for getting tickets to sold-out games include using social media and buying hospitality tickets.

Premier League games may officially be sell-outs but there are often a few empty seats around due to people not showing up. Fans who tried and failed to get tickets have every right to feel disappointed when they see empty seats during a live broadcast.

Thankfully the following methods can often bear fruit in the difficult search for sold out football match tickets.

The internet is a wonderful place and people have been using it for years to make the world better. One such form of website that helps football fans out is the online ticket sale site.

Typically, these websites can get hold of tickets originally used for corporate sponsors or from ticket specialists. They can then be sold on through online marketplaces to ensure as many true fans get to see their team play in person. Some of these sites have reputations for being used by touts, however, so it’s very much a case of buyer beware.

Examples of football ticket websites include:

Social media has its positives and negatives but one of its benefits is putting football fans in touch with each other. People with spare tickets to games often make a social media post to see if anyone would like to join them.

Even on the day of a game, it’s possible to search for something like “Manchester United tickets” and you’ll get some results. It requires a good Samaritan to put their available tickets out there for everyone to see but it’s possible.

Of course, there is no guarantee and we would highly recommend not parting with any money until you see the ticket first. It’s too easy to get scammed so arrange to meet the ticket holder in a public place. Once you are happy that the ticket is legit then it’s time to exchange money.

Unfortunately, there is sometimes only one way to get into a Premier League match and that’s through hospitality tickets. These are unfortunate because they are expensive and generally price the average fan completely out.

Desperate fans will have to shell out hundreds of pounds per ticket if they wish to go down this route. Taking Arsenal as an example, the cheapest club hospitality ticket for a Monday night game against Crystal Palace is priced from £260.

Sometimes the home crowd is just too strong and finding seats among your fellow fan proves too difficult. There is still the option of purchasing an away ticket, especially if the team is coming a long way.

While thousands of passionate football fans travel hundreds of miles to see their team play, they don’t always fancy the trip. It will be a long shot but there is the chance that the travelling support hasn’t brought its full quota. You might have to bite your tongue when among rival fans but it’s a way to get into the match.

What is the Best Website to Buy Football Tickets From? [TOP 3]

Thankfully for football fans, there is more than one website to buy football tickets from. Some of the best examples include Live Football Tickets, Ticketgum, Seatpick and Football Ticket Net. These websites act as a marketplace for people to sell their unwanted tickets to those who do.

Buying tickets online for otherwise sold-out football games can feel like a risk. Finding a website that you can have confidence in makes a huge difference.

The websites mentioned above have overall positive reviews on the consumer review site Trustpilot. Many come with the latest versions of internet security to put customers at ease regarding their legitimacy.

Live Football Tickets allows football fans the chance to see their team in the flesh. Tickets are purchased securely online through the marketplace to Premier League, FA Cup and Champions League matches. Of course, these tickets may come at a slight premium but, unfortunately, that is a case of supply versus demand.

However, we had a quick look and there were tickets available for the Liverpool Vs Manchester City match at Anfield (October 2021) from £103. It’s not exactly cheap but it’s a lot less than you would have to pay per ticket through hospitality.

Live Football Tickets has received an overall excellent rating on Trustpilot and it offers an opportunity to see Premier League football. It is a legal enterprise and it has over 1,800 reviews on Trustpilot.

Ticketgum is a secondary marketplace that offers resale tickets to sporting events including football, rugby and tennis. The company offers variable prices that may be above or below face value depending on demand. Tickets are supplied to customer addresses, locations near the ground or via email.

Ticketgum claims to have over 85,000 satisfied customers with a live chat option to guide people through the process. The website is one of the most trusted ticket marketplaces on Trustpilot with over 1,000 reviews and an overall excellent rating.

Seatpick works a little bit like Skyscanner or comparison websites for car insurance but for events. It gathers tickets available from various marketplaces into one handy location.

Then, it’s up to you to choose the deal that suits you best; that might be just a single ticket or a group of four for you and your mates.

Like many of the other websites we have recommended, Seatpick comes with a positive overall rating on Trustpilot. It has a 4.5/5 rating with customers being very satisfied with the service. Seatpick claims that over 3 million fans have used its services at venues and cities all over the world.

Is it Illegal to Buy Tickets Outside the Stadium in England?

Strictly speaking, ticket touting is illegal. However, it has been around for many years and it is very difficult to police. Buying tickets outside the stadium in England is not allowed and it may carry a football banning order.

The Criminal Justice and Public Order Act 1994 made ticket touting illegal to prevent rival fans from being enclosed in the same area. Further law changes have been introduced to stop touts from getting creative with how they sell their tickets. Including preventing them from ‘harvesting’ tickets and stocking up to drive the resale price through the roof.

Buying tickets online from ticket marketplaces isn’t illegal but there is a risk for the seller more so than the buyer. Football teams vowed to ban ticket holders who sold their seats, which can be very costly to someone who spent years on a waiting list for a season ticket.

Many ticket marketplaces like the ones we have already mentioned are commonly based abroad. Due to their locations, they are harder to shut down than ones based in the UK.