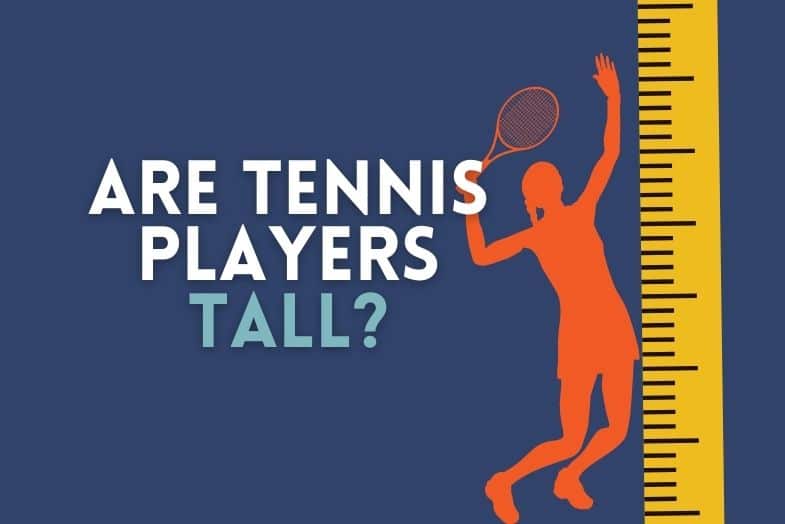 Like the vast majority of sports, tennis requires a combination of attributes that must be possessed by a certain individual if they intend to reach the pinnacle of the sport.

A top class tennis player must have sublime technical skills, strong stamina, impressive physical strength and above all else, they have to be mentally strong in order to endure the gruellingly long matches and exhausting schedule.

But what about height? Is a tennis player supposed to be tall or short? What are the advantages that could be gained from it? And what is the average height for pro tennis players?

Let’s take a closer look at the heights of the players in one of the most prestigious sports in the world, one that adopts a curious scoring system.

Is It Better to Be Short or Tall in Tennis?

Even though short tennis players might possess a certain advantage when it comes to moving smoothly around the court, their taller counterparts have the edge in the majority of aspects.

Tall players tend to hit stronger serves, and their height provides them with a wider reach. Their extra inches also help them in hitting the ball from better angles.

Does Height Help in Tennis?

Similar to most individual sports, height is considered to be a physical advantage for the the contestant if they capitalizes on it in the right manner.

A tall player who approaches the net in the right timing can be menace for his opponent, as his height can help him in catching lobs. Additionally, his reach will allow him to launch powerful serves that descend from above.

As we’ll notice below, elite tennis players are getting taller with every generation. Although we haven’t yet reach basketball levels, but we’re getting more and more accustomed to the sight of a towering tennis star who can also move swiftly all over the court.

What is the Average Height of a Tennis Player?

According to a study from My Tennis IQ, the average height of the Top 500 male tennis stars is 185.5 centimetres, or 6-feet-1.

Can Tennis Players Be Short?

While height is surely a significant advantage in tennis, the sport is not exactly an exclusive club for tall players. Shorter players still excel in tennis, especially those who rely on a superb technique and a great pace.

The Modest Man presented a shortlist of nine players from the past and current stars of the sport, who aren’t exactly blessed with a towering height. Thanks to their talent they never considered a switch to another sport in search of more success.

On the retired front, the list features Marcelo Rios, Michael Chang and David Ferrer who all stood at 175 cm. Moreover, the legendary Rod Laver who won 11 single Grand Slam titles back in the 1960’s measured at 173 cm.

As for the active players, the list doesn’t actually include names who are currently considered amongst the elite, which is a clear indication on the growing importance of height in the modern game which emphasizes more and more on physical strength.