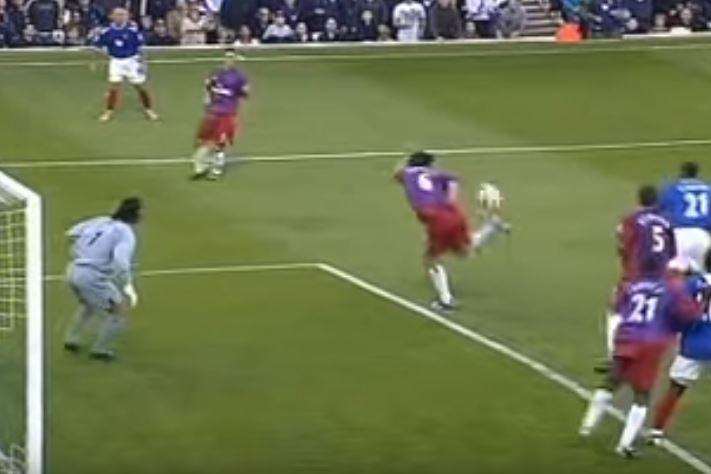 Just as an unstoppable free-kick or a 30-yard screamer right into the top corner can be a thing of beauty, so too, in its own special way, can a player putting the ball through his own net.

Especially when it’s a nonchalant pass back from the defender which his goalkeeper completely misreads, leaving him in no man’s land and leaving the ball in the back of his goal. Here are eight that range from the sublime to the ridiculous:

Sergio Aguero’s stunning injury-time title-winner for Man City against QPR in 2012 isn’t the only goal in fixtures between these two sides that will go down in infamy. Far from it.

First, he intercepts a QPR cross – a good start. Then, he loops it over one of his team-mates and an Rs striker before volleying a header back to goalkeeper Martyn Margetson. Sadly, though, Margetson never received it; he was already too far off his line and could watch the ball from over his diving, despairing body and into the net.

That put City 2-1 behind, and though the did equalise through Lee Bradbury, a draw here essentially relegated them to third tier while ensuring QPR’s survival. Months later, QPR fans rigged an online vote which resulted in Pollock being named the most influential man of the past 2,000 years. “Jesus came second, apparently,” Pollock said later.

Picture the scene. A Darlington ball has just been played into the Bury box. It’s pretty aimless, and there’s nobody really around you. Plus, you’re a defender. This is meat and drink. Just leather it away, right?

Sadly, Bury’s Chris Brass had other ideas, seemingly attempting an overhead kick which landed not only egg on his face, but the ball, too. It then rebounded off Brass, who nearly received a broken nose, past goalkeeper Kasper Schmeichel, and into his own goal to put Darlington ahead early on.

Did Brass have the last laugh? Well, Matthew Tipton gave the Shakers a last-minute victory and it helped them beat the drop to the Conference, but his mishap was also voted the number one incident in FourFourTwo’s “It shouldn’t happen to a footballer” list.

The sort of blunder that you can’t watch without hearing Alan Partridge’s commentary in your head, Christoph Kramer’s own goal against Borussia Dortmund in 2014 was nothing short of a long-range screamer.

It should have just been a simple pass back to goalkeeper Yan Sommer, but Kramer got too much elevation on it and ended up lobbing the stopper, helplessly stranded on the edge of his penalty area.

You would naturally think this was the one moment he experienced in 2014 that he’d like to go back and change, but he was also knocked out while playing for Germany in their World Cup final win over Argentina that year and can’t remember any of it, so maybe not.

If Tony Popovic was a Portsmouth striker, the Fratton Park faithful would talk about this for decades as one of their team’s greatest goals. Crucially, though, he wasn’t. He was a centre-back for Crystal Palace.

Again, this shouldn’t have been hard to deal with. Steve Stone’s cross was aimed squarely into his path, but Popovic bizarrely sent a deft flick of his right foot past keeper Julian Speroni to put Portsmouth 3-1 up late on and wrap up the points.

It continued a miserable start to the 2004-05 campaign for Palace, who had taken one point from their first four games and went on to be relegated from the Premier League that season.

Remember Rene Higuita? Remember how everyone marvelled at his faultless scorpion kicks? Well, they look great when they come off, as they did with him, but when they don’t, as Festus Baise will know, nothing could look more embarrassing.

A Jack Sealy cross fell straight to centre-back Baise, who inexplicably attempted a sort of reverse scorpion kick that soared into the air and landed past his goalkeeper and into the net.

The most acrobatic on the list for sure, Baise will just be relieved it didn’t cost his team, Citizen, any points, as they still secured a 3-2 win over Sun Hei SC in the Hong Kong First Division League that day.

Ronaldinho wasn’t the only player to catch David Seaman off-guard. No, in 1991, Seaman’s own team-mate, Lee Dixon did exactly the same for Arsenal against Coventry City.

Similar to Kramer’s own goal, Dixon simply chipped his own goalkeeper from exceptionally long range. That Arsenal back four will go down in history for all the right reasons, but this blunder from one of them will for all the wrong reasons.

It cost the Gunners the match, too, as Coventry departed Highbury with a 2-1 win.

You’re playing for struggling Sunderland away to a flying Southampton side. Against players like Dusan Tadic, Graziano Pellè and Sadio Mané, you’re best off taking no chances early doors.

Sadly for Sunderland, centre-back Santiago Vergini didn’t heed this warning, as fired an expert volley past goalkeeper Vito Mannone from inside his own penalty area, opening the floodgates in the process.

Southampton went on to destroy the Black Cats 8-0, with Vergini’s own goal starting the rout in a match where the Saints only had ten shots on target, too.

This was the song sung by Liverpool fans about their own player, after Djimi Traoré’s comical error cost them a place in the 2004-05 FA Cup to Championship side Burnley.

For whatever reason, Traoré decided to try a neat little pirouette right in front of his own goal while attempting to clear a Burnley cross. Unfortunately for him, it ended up in Jerzy Dudek’s net, and proved to be the only strike that night. Just what was he thinking?