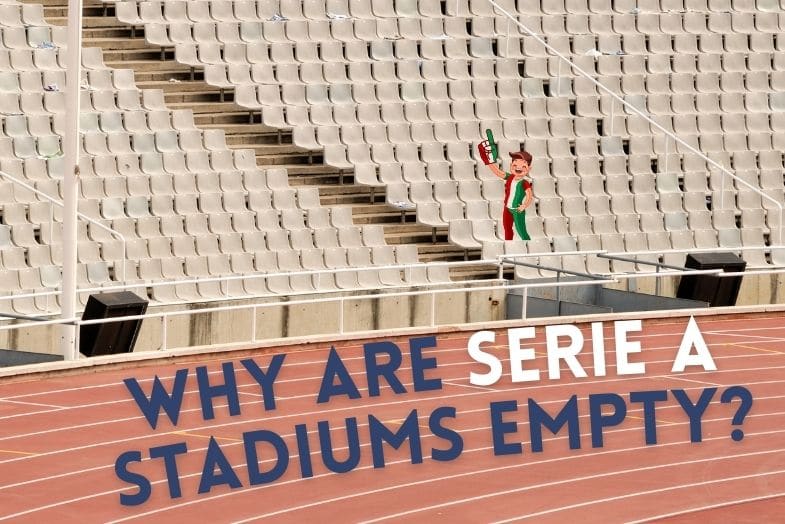 Since the early months of 2020, empty stadiums have become a more common sight for fans of European football. The stands that were always packed with the wildest of crowds became sad and abandoned. During the Covid-19 era, football was barely recognizable.

But unfortunately for Calcio fans, an entire empty stand or a half-full “Curva” was already a customary scenery long before the breakout of the worldwide pandemic. Since the beginning of the new century, the Italian first-tier has witnessed a major drop in terms of live attendance.

But what are the main reasons behind the low attendances in Italian stadiums? And how does the Serie A numbers compare to the English Premier League? And are the match tickets in Italy expensive?

In order to answer all these questions, we must dig deep into the elusive world of Calcio, with all its beauty and sorrows.

The Serie A attendance saw a steady decline between the late 90’s and the early 2000’s, before settling around 60% of the stadium capacities. These percentages remained consistently low, until it witnessed a noticeable improvement during the 2019/2020.

Coincidentally, right when the league was enjoying a mini-resurgence in terms of attendance – with the average reaching 70% – the breakout of the Covid-19 abruptly ended this phenomenon. Until the Italian authorities allow the reopening of the stadiums with their maximum capacity and the consequences of the pandemic are put behind us, we won’t be able to tell whether the incline would continue or not.

Based on Tranfermarkt’s data, the crowd attendance in Serie A were at times remarkably higher than 100% during the early 90’s. However, these stats aren’t completely accurate, as the website used the current capacity of the stadiums rather than the ones that were present at the time. For example, the study calculates the capacity of Juve’s Allianz Stadium at around 40,000 seats, which is valid at the present time, but prior to 2006, the old Delli Alpe Stadium was able to host around 70,000 supporters.

In any case, the sight of packed stadiums was plain to see during the golden days of Roberto Baggio, Paulo Maldini and Franco Baresi, without needing further statistical proof. On the other hand, the turn of the new millennium proved to be disastrous in terms of attendance, as we’ll notice in the following paragraph.

Serie A vs Premier League Attendances

When it comes to attendance, the Italian Serie A and the English Premier League are worlds apart. Whilst the Italians have been struggling to fill their stadiums in the last twenty years or so, the Brits have turned their league into the ultimate best domestic league in the world that currently hosts at least six Top clubs – at least as the European Super League announcement indicated – with the faithful fans always present to support their favorite teams, through thick and thin.

So let’s see how the numbers compare between the two leagues in terms of the average percentage of crowd attendance throughout the last twenty years, according to Tranfermarkt.com.

Why Are Serie A Attendances so Low?

There are several reasons behind the low attendance rate in Serie A. From the poor infractures of the stadiums, to some ugly episodes of violence amongst the Ultras (the extreme section of the fans), plus the TV broadcasting that allows the fans to watch all the matches from the comfort of their couches.

Let’s start with the stadiums themselves. Some might find it hard to believe, but besides Juventus, Serie A clubs do not own their stadiums. The owners in the vast majority of the cases are the local municipalities. Thus, the clubs actually rent the stadiums for matchday purposes.

This imperfect situation naturally creates a conflict of interest. While the already-struggling and indebted clubs would find it very difficult to spend money from their coffers on a venue that they don’t even own, the municipalities often tend to run away from their responsibilities using bureaucratic regulations.

Therefore, most of the major stadiums in Italy haven’t been renovated since 1990, when the nation hosted the World Cup. Add to that the poor public transportation, and we can understand why the casual fan might not enjoy his matchday experience.

Moreover, some of the stadiums are simply too big for their hosts – especially when it comes to provincial sides. Take the Marcantonio Bentegodi Stadium in Verona for example. The capacity of the stadium is circa 30,000, which isn’t considered a particularly large venue, but for a club with a tiny fanbase like Chievo it had always been enormous – especially considering the fact the the Flying Donkeys are historically the second club of the city, with Hellas Verona being the more popular side.

As for the crowd violence, we’ve witnessed some unfortunate episodes (especially during the 2000’s). From the Capital Derby that was interrupted by Roma and Lazio ultras due to false rumors of a child’s death outside of the stadium, to the Sicilian Derby between Palermo and Catania that ended up with the murder of a police officer, attending a football match suddenly became a dangerous adventure, and far from being an ideal family trip on Sunday afternoon.

Let’s also not forget about the lack of players with true drawing starpower. Surely the likes of Cristiano Ronaldo, Zlatan Ibrahimovic and Romelu Lukaku boosted the attendances, which might explain the improving numbers witnessed in 2019/20, but the best players in the world tend to spend the majority of their playing career enjoying the riches of other wealthy nations rather than playing in a league has been labeled by some (although wrongly) as a Farmers’ League.

Additionally, Italian football lacks laws that protect stadium attendances from being swept away by TV broadcasting. For instance, it is prohibited in England to broadcast a match on television during the rush hour on Saturday afternoon. Thus, the fans are encouraged (or indirectly forced) to buy themselves a matchday ticket.

On the other hand, Italian broadcasting networks allow the viewer to scroll between several matches with one magic button whilst sitting on his sofa wearing his favorite pajamas. So why bother with an uncomfortable trip to an outdated stadium on a lazy Sunday?

Are Serie A Tickets Expensive?

Serie A tickets are not incredibly expensive in comparison with the other Top 5 European leagues, but they can be considered overpriced when considering the poor infrastructures of the stadiums. According to Statista, the average ticket price for a Serie A match in the 2018/19 season was 32.9 Euros.

But on the other hand, the same study shows that Serie A also has the most expensive ticket, and by far, as it can reach around 135 Euros, creating a huge gap between the cheapest and most expensive ticket. Perhaps this difference can be explained by the fact that stadiums in Italy are far from being modern, and some of the angles are truly undesirable for the fans in attendance. Moreover, the prices could vary between one crucial match and a “less important” one.

Therefore, the fan would always be able to afford a matchday ticket in Serie A for a reasonable price. However, this might not guarantee him an enjoyable matchday experience and a good angle, as the better seats could be reserved for those who are willing to splash the cash.