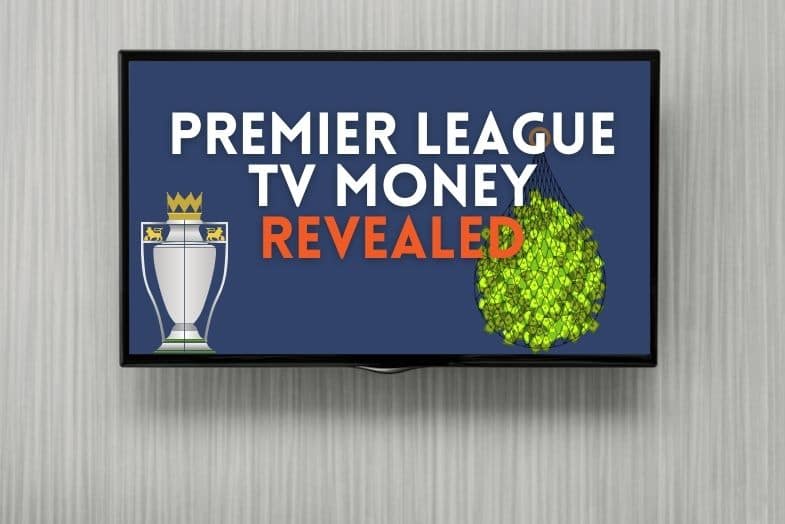 They say that Rome wasn’t built in a day. Well, neither was the modern-day footballing empire known as the English Premier League. How the league was formed in 1992 and grew so massively is a tale that deserves an article of its own, but one thing is for sure, TV rights and prize money played a major role in its birth.

So how much does the Premier League make from broadcasting rights? Who are the league’s main TV partners? And how is the money split between the clubs?

What is Broadcast Revenue in Football?

Broadcast revenue in football is the amount of money paid to the football federation (and subsequently to the clubs) by its broadcasting partners (representing TV networks or online platforms) who in return obtain the right to display or cover a certain amount of matches.

In the age of worldwide media, the major sporting events now heavily rely on their broadcast revenues to garner profits, whilst the box office ticket revenues have been dwarfed in comparison.

How Much Does the Premier League Make from TV

The Premier League currently generates around 1.5 billion Pounds per season from their shared agreement with its local broadcasting partners – SKY Sport, BT Sport, Amazon Prime and BBC Sport. On the other hand, the league earns around 1.3 billion Pounds from overseas TV rights.

Even though several EPL clubs are heavily indebted, the astronomical figures help them remain afloat, and somewhat reassures their creditors. When the fans were absent from the stadiums throughout the 2020/21 season, the lucrative TV revenues perhaps prevented the English clubs from suffering the catastrophic consequences felt by their counterparts in the rest of the European big leagues.

The Premier League obviously has numerous broadcasting partners around the world. From NBC in the United States, to BEIN Sports in the middle east and North Africa, all the way to Super Sport in South Africa, just to name a few.

But on the English shores, the EPL has four main TV partners who share the broadcasted matches between themselves. It’s worth noting that according to the current deal, only 200 out of the 380 fixtures are aired on television every season, as the rest of the matches are played on Saturday afternoon’s “rush hour”, and the laws in the United Kingdom prevent any broadcaster from displaying these encounters, which is supposed to encourage the fans to attend a match on a nearby stadium rather than watching it from the comfort of their couches.

As we mentioned above, the Premier League’s three local major broadcasting partners are Sky Sports, BT Sport and Amazon Prime. Additionally, the state-owned BBC is authorized to display all highlights and replays from every Premier League match. The table below showcases how many fixtures are currently broadcasted by every domestic partner, plus how much each of them pays in return, according to Sportspromedia.com

How Much Do Premier League Clubs Get from Sky?

According to its official website, Sky paid 1,193 million Pounds to acquire the exclusive broadcasting rights of 128 Premier League matches in Britain during the 2021/22 season. A similar deal was also agreed until 2025.

As proven by numbers displayed in the table above, Sky Sports remain the league’s most important partner, and this collaboration dates back the EPL’s launching back in 1992, with the network playing a major role in creating the new format that would go on to change the footballing landscape, and putting the English clubs on the top of the most profitable clubs’ list on European stage.

The Premier League’s broadcasting revenues generated from its local partners is split into three categories. The equal share (50%), facility fees (25%) and merit payments (25%). As for the foreign broadcasting money, it’s split equally between the 20 participating clubs.

As it’s noticed, calculating foreign TV revenues is a much simpler equation than the ones related to UK broadcasters, where it’s split into three distinct categories. The equal share, which makes up for half of the local revenues, is the aspect that truly distinguishes the Premier League from its European counterparts where the big sharks dominate the largest chunks, leaving the smaller clubs with the leftovers. Contradictory, the EPL provides a fair share for every participant, currently estimated at around 34 million pounds.

As for the facility fees, then it’s based on the number of matches broadcasted for every club throughout the season. For fairness sake, every club receives a minimum of circa 12.3 million Pounds if less than 10 of its matches were aired live. For every broadcasted fixture beyond the first ten, a club will receive around 1.1 million Pounds.

Finally, the merit payment depends on the club’s final position in the league at the end of the season. The bottom of the table club will receive circa 1.93 million Pounds, with every club receiving an extra 1.93 million for every higher position.

After detailing how the TV money is split amongst Premier League clubs, we’ll revert for the clubs revenues from the 2020/21 for a practical example, as displayed by Sportscriber.com.