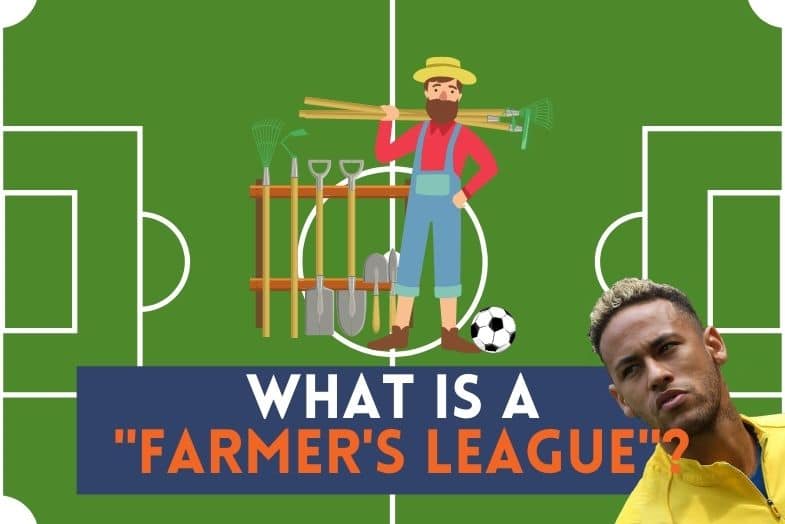 In this day and age, information can be transmitted all around the world within the space of a few seconds, creating a worldwide network of shared thoughts and general opinions.

Although the ever-advancing technology definitely played a role in spreading culture and education, unfortunately for humanity, insults and derogatory terms can catch fire more rapidly.

As anyone who spent some of his time on social media would notice, these platforms are sadly filled with mockery, belittling and generally negative thoughts directed towards a particular person or a certain group.

Football platforms are surely not any different, with an estimated 4 billion fans around the world, one can only imagine how many “rotten apples” are willing to create and spread damaging ideas throughout the net.

In a time where football players are still facing racial abuse online on a recurring basis, the term “Farmer’s League” pales in comparison, as it could be described as mere banter.

But what is a “Farmer’s League” in football? Which leagues get labelled with this term? And how much is this accusation justified?

A “Farmer’s League” is a derogatory term used by football fans to describe a football league (usually professional) that they don’t consider to be competitive. Similar insults include describing a league as a “Pub League”, “Village League” or “Sunday League”.

. Calling a league a “Farmer’s League” insinuates that its players are made up of local farmers rather than elite well-paid professional footballers..

Whilst farmers surely aren’t the only ones who created their own amateur leagues, they happened to be the unlucky party to get their league associated with a mocking term.

What is a “Farmer’s League”?

A “Farmer’s League” is a derogatory term – mostly developed by online football fans – to describe a league that lacks quality and competitiveness.

Thereby, a farmer’s league is a competition that is usually pre-dominated by one or very few elite clubs, whilst the rest is made up of small hopeless sides with very modest aspirations.

This slang is more commonly adopted by fans of the English Premier League, who widely consider their league to be the best domestic competition in the sport.

Whilst it’s hard to argue with the EPL’s supremacy on both the sporting and the financial levels, referring to some of the other Top Five European leagues as Farmer’s league is undoubtedly a controversial statement, and can is often being taken as an insult

Which Leagues Are Known as a “Farmer’s League”?

France’s Ligue 1, Italy’s Serie A and Germany’s Bundesliga are sometimes referred to a Farmer’s Leagues by football fans, despite all being among the top five leagues in Europe., at least three leagues are being labelled as a “Farmer’s League” by a section of online football fans, although with varying degrees.

So let’s study these three leagues case by case.

Even though tracking the exact origin of an online slang is an almost impossible task, the term “Farmer’s League” has been associated first and foremost with Ligue 1.

When Neymar made his record-breaking transfer from Barcelona to Paris Saint Germain, this term grew further with every highlight video displaying the Brazilian’s flamboyant tricks and skills versus some of the hapless French defenses, thus belittling his accomplishments in his newly-adopted nation.

The arrival of the former Santos man to the “City of Light” alongside Kylian Mbappé in 2017 served in widening the gap between the capital side and their domestic competitors.

Although the Parisians’ dominance has been interrupted by Monaco in 2017 and Lille in 2021, Ligue 1 still lives in PSG’s large shadow.

Despite the language barrier, the French people aren’t ignorant of the mocking term used by their neighbors across the English Channel, and they definitely aren’t amused by it.

In fact, Mbappé himself tweeted the term alongside a clown’s emoji following the qualification of two French clubs (PSG and Lyon) to the Semi Final of the Champions League in 2020. The superstar was obviously replying to the EPL fans, with all English clubs eliminated from the competition at that point, thus returning fire with fire.

Is Serie A a “Farmer’s League”?

Whilst your stereotypical EPL fan wouldn’t hesitate before calling Ligue 1 a “Farmer’s League”, Serie A could be a topic of debate, but still, it receives its fair share of this negative label.

Even though the league has become a far cry from the one witnessed during its golden age between the 80’s and 90’s, you can refer to Serie A as a “Farmer’s League” in front of Calcio fanatics at your own peril.

Described as too slow, too rigid and too tactical, Italian football has made giant leaps in the last few years to become more appealing to worldwide fans, with the rise of a new school of thought. This can be witnessed through the Napoli side that was led by Maurizio Sarri, as well Gian Piero Gasperini’s Atalanta and even Roberto Mancini’s Italian national team.

Nevertheless, with at least seven solid clubs taking part, and the resurrection of the Milanese duo, the ground is back to being more level, and the competition remains an exciting one – even if the financial difficulties force Italians to sell some of their jewels to richer entities from time to time.

Is Bundesliga a “Farmer’s League”?

Perhaps the term “Farmer’s League” is less commonly used to refer to the Bundesliga in comparison with Ligue 1, but the German league lands in second place on the mockery list.

The slogan “Més que un Club” (translated to “More than a club”) is famously associated with Barcelona. However, this line makes an incredibly accurate description for Bayern Munich’s status in Germany.

The Bavarians reign supreme over German football, and are backed by an efficient management made up from a host of the club’s legends, and enjoy an extremely healthy financial state.

These aspects have been transmitted into a complete domination on the field, with FC Hollywood being the undisputed league winners since 2013.

Moreover, Bayern’s supremacy was most avidly displayed when they bailed out their fierce rivals, Borussia Dortmund, when the latter club was facing bankruptcy in 2004.

On the other hand, the rest of the Bundesliga act as feeder clubs for the Bavarian giants. Even the likes of BVB, Schalke and RB Leipzig end up selling their best players whenever Die Roten comes calling (Mario Gotze, Mats Hummels and Manuel Neuer are only a few examples).

Therefore, when it comes to a one-sided league, the Bundesliga makes for a prime example, with Bayern’s dominance unlikely to be threatened anytime soon.

However, being described as a “Farmer’s League” would be a great insult for the Bundesliga, as the dominance of a single club doesn’t justify the use of the term.

After all, we’re still talking about one of the undisputed best five domestic leagues in the world. So what’s left for the smaller leagues all around Europe and the rest of the world?

When it comes to football leagues, the hierarchy resembles a pyramid. Whilst the Premier League is arguably at the very top, this shouldn’t grant a section of their fans to brand the leagues that are right below them as a “Farmer’s League”. After all, every league has its weaknesses – EPL included – but the quality of football remains present in all of the Top 5 European leagues, with their very own loyal fanbases.

But then again, banter will always be a part of the sport – whether we like it or not – and this debate will surely last for years to come.