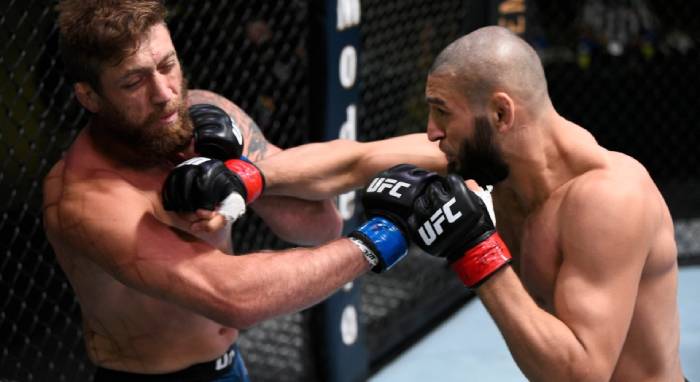 You may have seen that in late July 2020, a new competitor entered the Ultimate Fighting Championship (UFC) record books in Russian welterweight and middleweight fighter, Khamzat Chimaev.

Chimaev become the fastest UFC competitor to face two successive bouts, with just a ten-day difference between his victories over John Phillips and Rhys McKee.

But by how many days did Chimaev smash the record? Who else in the UFC world have fought back-to-back bouts in similarly rapid time? Let’s take a look at the five fastest UFC fight turnarounds:

Fifth on the list is ‘Cowboy’ Cerrone, who saw off both Myles Jury at UFC 182 and Benson Henderson at UFC Fight Night 59 with just 15 days inbetween.

Fuelled by the disdain he felt for Jury after his arrogant reaction to beating his former training partner, Diego Sanchez, in UFC 171, Cerrone defeated Jury after three rounds by an unanimous decision in their lightweight bout on January 3, 2015.

Cerrone then asked to fight friend and World Extreme Cagefighting (WEC) rival Benson Henderson only 15 days later on January 18 in Boston, replacing the injured Eddie Alvarez. Again, it was a lightweight bout won by Cerrone after three rounds on a unanimous decision, with all three judges scoring the fight 29-28 in his favour.

The first of two fighters to enter the Octagon twice in exactly two weeks, Pague was not so successful as Cerrone, winning one and losing the other of his bouts in June 2012.

‘The Discipline’ initially defeated Jared Papazian on June 8, 2012 at ‘UFC on FX 3’ in Sunrise, Florida, beaten him by submission due to a rear-naked choke after just one round of their bantamweight fight.

But Pague could not make it back-to-back wins in quick succession. With just six days’ notice, he fought Ken Stone at ‘UFC on FX 4’ on June 22, having replaced the injured Francisco Rivera. Stone would win the fight thanks to a split decision.

A more successful two weeks was enjoyed Chris Leben, who initially broke this record when he fought – and won – twice in 14 days in the summer of 2010.

The first was tough for Leben, as Simpson slammed him numerous times, but eventually repeated punches in the second round saw Simpson collapse face-first on the other side of the Octagon. As a result, referee Josh Rosenthal ended the fight, with Leben the winner via TKO.

Leben then agreed to deputise for the injured Wanderlei Silva, forced out with broken ribs, in a middleweight bout with Yoshihiro Akiyama on July 3. Despite being on the back foot for much of the first round, Leben stayed in the fight, ultimately defeating Akiyama via triangle choke with just 20 seconds left of the fight.

That wasn’t the end of it, though – in the aftermath, Leben called out Silva of all people, saying: “Come on Wanderlei, I’ll take you out, too!” Leben indeed fought Silva almost exactly a year later, knocking him out 27 seconds into their clash – the fastest knockout win in Leben’s career.

This record was then broken again by lightweight and featherweight fighter Chas Skelly in August and September 2014, with two wins within a mere 13-day period.

His first fight, a featherweight clash with Tom Niinimaki on August 23, 2014 at UFC Fight Night 49 in Tulsa, resulted in victory via submission due to a rear-naked choke inside two minutes and 35 seconds of the first round.

And after taking on barely any damage during that fight, Skelly went again as quickly as September 5 at UFC Fight Night 50, replacing the injured Andre Fili at the Connecticut event. There, he faced Sean Soriano in another featherweight bout, which he won via an unanimous decision after three completed rounds.

This set the record for the shortest time between UFC fights (and wins) in the modern-era – an accolade which, of course, has since been taken from him.

But the new record-holder for the fastest turnaround between UFC fights is, of course, Chimaev, whose feat was only made more impressive by the fact he won each bout in a different weight class.

First, Chimaev submitted John Phillips at middleweight on July 15, and after asking the UFC to return to the Octagon straight away, they obliged on the proviso that he drop down to welterweight.

Chimaev did exactly that and still landed a victory via first-round TKO in three minutes and nine seconds over Rhys McKee at Fight Island on July 25, winning without absorbing a single strike. Within seconds, McKee was pinned down, a move from which the Irishman never recovered.

Has Anyone Fought Twice in a Night?

Though, it’s worth mentioning that while Chimaev holds the modern-era record, the early days of UFC used to involve knockout tournaments with fighters contesting up to three fights in the same night in some cases.

The entirety of UFC 1, for instance, took place over November 12, 1993, with winner Gerard Gordeau and runner-up Royce Gracie both winning two fights earlier that day before then facing each other in the final.