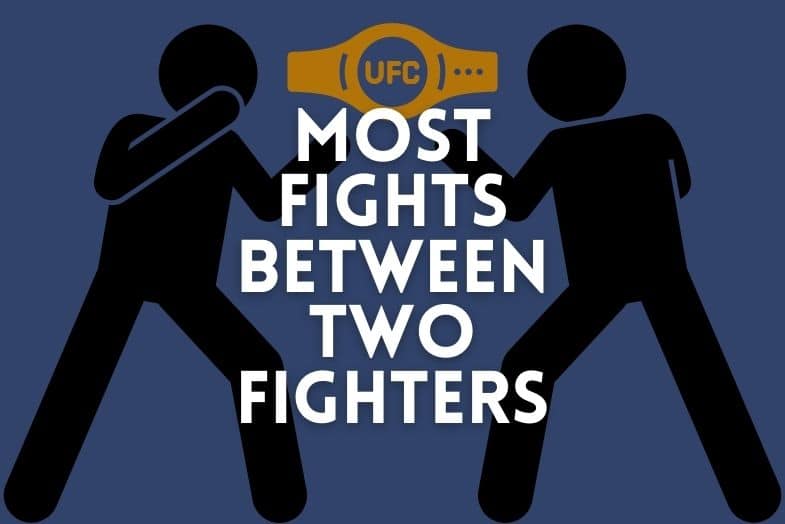 Here we’ll look at which trilogies have solidified their names in the UFC history books, as well as going through which fighters have fought an incredible four times in mixed martial arts. Have there been cross-promotion fights? Which trilogies are considered to be the greatest? Let’s find out:

Have Any UFC Fighters Fought 4 Times?

Heavyweights Andrei Arlovski and Tim Sylvia faced off on four different occasions, with three of the fights taking place at UFC. Sylvia would win the first two meetings before Arlovski was victorious in the third.

Their final meeting ended in controversy at One FC after Arlovski floored his opponent with a well-placed combo before hitting an illegal kick whilst Sylvia was down.

This forced the referee to end the fight as a no contest and provide no conclusion to the ongoing feud, much to the dismay of the crowd and mixed martial arts community.

Although no fighters have yet fought each other four times exclusively in the UFC, there are two match-ups that look like they will soon happen for the fourth time: Brandon Moreno vs Deiveson Figueiredo (1-1, plus 1 draw) and Conor McGregor vs Dustin Pourier (1-2).

Which UFC Fighters Have Fought Each Other Most?

Alongside Arlovski and Sylvia, Wanderlei Silva and Quinton Jackson have fought in a four-fight mixed martial arts series, with all four fights being televised live on pay-per-view.

The quadrilogy is known as an aggressive series due to all four fights ending in either knock-out or technical knockout, however, only one of the fights occurred in UFC.

Valentina Shevchenko and Joanna Jedrzejczyk have also met four times with their only UFC fight occurring in the co-main event of UFC 231.

Tito Oritz has remarkably fought in trilogy series with two different opponents – Ken Shamrock and Forrest Griffin. Ortiz made history in 2006 against Shamrock as this was the first trilogy in UFC history to end in a 3-0 sweep.

There have been 14 trilogies in UFC history with the Ortiz vs Shamrock fight widely regarded as the greatest.

Trilogies have helped UFC grow substantially, with supporter following, fighter payment and pay-per-view matches increasing rapidly since the first ever televised event in 1993.

Randy Couture also cemented his name in the history books with his trilogy of fights against Vitor Belfort. The two fought between October 1997 and August 2004 with Couture winning two of the three bouts.

The Washington fighter claimed the light heavyweight title in his trilogy win, becoming the only person in UFC history to have multiple title reigns over two divisions.

Could Two Fighters Face Each Other 5 Times?

A fifth fight could potentially take place in the future between feuding lightweights Conor McGregor and Dustin Poirier. The two had their trilogy fight in the main event of UFC 264 and are reportedly planning a quadrilogy.

Should McGregor win a potential fourth fight, that would make it two wins each for the pair, which could set up a record fifth fight.

McGregor suffered a broken leg in the third fight, forcing the contest to finish early with UFC President Dana White revealing that there will be a rematch when McGregor is healthy once again.

Number one ranked Poirier was announced as the victor of their last trilogy round before a doctor stoppage ended the fight. The two fighters have won one each with McGregor picking up the first in 2014 before Poirier evened the score in January 2021.

This feud potentially has the legs to extend to a fifth fight, although that remains to be seen.