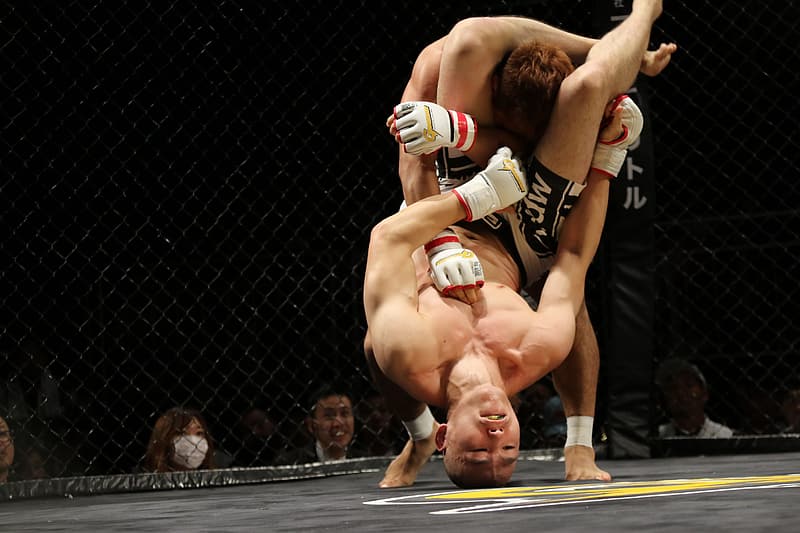 Back when it first launched in 1993, the Ultimate Fighting Championship sold itself as a form of mixed martial arts where the only rule was that there were no rules.

This, of course, was false advertising, but the UFC has still garnered a reputation for being more lenient than most other sporting divisions.

So, just what moves are and aren’t allowed to be performed by fighters when they take to the Octagon?

Are Headbutts Allowed in UFC?

No. If a UFC fighter deliberately headbutts his opponent, he or she is likely to have at least point deducted by the referee. This could even result in disqualification if the injured fighter is unable to continue as a result of the headbutt.

If a fighter accidentally headbutts his opponent, he may still have a point deducted. Should this happen during the first two rounds of a three-round bout, it will be declared a no-contest if the injured fighter cannot continue.

If it occurred in the third and final round and the opponent could not carry on, the judges would score all three rounds.

This hasn’t always been the case – headbutting was a legal move in the early years of the UFC, before it became banned from UFC 15 in October 1997.

Can You Throat Punch in UFC?

Not deliberately. No direct strikes to the throat are allowed in UFC – this includes a fighter pulling their opponent’s head in such a way to open the neck area to strike it.

Fighters also cannot gouge their fingers or thumb into the opponent’s throat/neck/trachea to attempt a submission.

But there is slightly more leeway in this area. If a punch lands in the region of the opponent’s throat, this may be seen as a clean and legal blow, assuming there was no obvious intent to aim there. Some referees may consider the throat an extension of the head and allow it.

A bit of a grey area, but one certain fighters have exploited in the past – not least Anderson Silva on Chael Sonnen at UFC 148 in July 2012:

Yes, as long as a fighter doesn’t use either of their elbows to strike their opponent in their spine, groin or the back of their head or neck.

Striking a downed opponent to the front of their head with an elbow, though, is one such legal elbow move.

This rule states that fighters may not strike their opponent by bringing their elbow from straight up to straight down.

So called because of how the two positions mimic the position of the two clock hands at 12 o’clock and six o’clock, this is a particularly dangerous move and a fight will be stopped and fighters given a warning in the event of it being used in the Octagon.

This ‘straight up, straight down’ elbow strike was initially prohibited to appease those found MMA too barbaric in its earlier forms. Some believe this move is capable of cutting an opponent or causing an eye injury.

We saw Jon Jones, for instance, disqualified, at The Ultimate Fighter 10 Finale in December 2009 because of delivering a ’12 to 6′ elbow strike to Matt Hammill’s head:

Despite the strict ruling on such a ‘linear’ elbow strike, any angle change from straight up to straight down will make an elbow strike legal.

Can You Kick the Knee in MMA?

It varies from state to state. Some states allow it, others rules that such linear kicks to the front of side of an opponent’s knee will result in a warning and a deduction of points from the referee.

A severe kicking to a kneecap can do serious damage to your opponent – along the lines of stretched tendons and ruptured ligaments and joints. They could cripple a fighter and they may never be the same again – which means that, truthfully, there isn’t a lot of honour in inflicting such a world of pain on someone in this way.

‘Knee stomping’, also known as an oblique kick, is currently legal in the UFC, though. This is where a fighter hits part of their opponent’s thigh just above the knee, which could hyperextend it and cause anterior cruciate and medical collateral ligament damage.

Darren Till injured his right knee after falling victim to a Robert Whittaker knee stomp at UFC Fight Island 3 in July 2020.

Are “Soccer Kicks” Allowed in UFC?

No. ‘Soccer kicks’ – kicks to a grounded opponent’s head from a fighter standing to the side or in front of their downed opponent – may be allowed in other countries, such as Brazil, Japan and Russia, but not in the UFC.

A ‘grounded’ fighter is defined as someone with any part of their body touching the Octagon floor besides the soles of their feet and a single hand.

Though some believe it should be permitted in the UFC, given that nobody has suffered a serious injury from a soccer kick yet, there are others who argue it could result in broken necks or even paralysis if it goes wrong.

“The MMA athlete can very easily generate more than enough force to cause a very significant injury to a grounded opponent.

If the neck luckily is not broken with this crude, unskilled manoeuvre, the trachea (wind pipe) and carotid artery also lie directly in harm’s way; significant trauma to either can be permanently life-altering.

“The rationale that it is safe because it has been done before and no one got hurt is faulty on many levels. Just because you may be unaware of anyone being injured doesn’t prove that the act is safe.

“It could merely mean that you are not well-informed, poor documentation was gathered, or we’re just lucky no one has been seriously injured yet.”

Can You Knee a Downed Opponent?

Likewise, in the UFC you cannot knee a downed opponent in the head, but you can knee them in almost any other part of the body while they’re grounded.

This rule came into effect at UFC 28 in November 2000, which was the first UFC event sanctioned by New Jersey State Athletic Control Board, using new Unified Rules of Mixed Martial Arts.

Summary of UFC Rules and Regulations

You can peruse the entire Unified Rules of Mixed Martials by clicking here, but here’s a full list of the acts which, if committed, can incur penalties from referees: