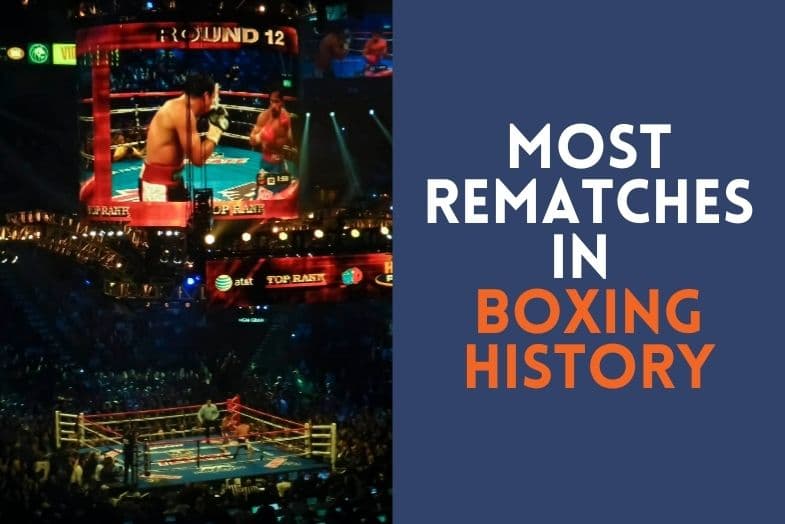 A boxing series is the pinnacle of one-on-one competition in the fighting world. Two athletes attempting to outbox one another to discover who really is the best.

Which boxers have fought each other the most?

The record for the most fights between two boxers is held by Mike Sweeney and Danny Cripps, who fought each other an incredible 63 times, between 1906 and 1921.

During an era where boxers fought more regularly than modern-day fighters, Sweeney and Cripps hold the incredible record for the most fights between two boxers in the sport.

Second on the list is Sam Langford and Harry Wills who fought 22 times in an intense rivalry, their final bout taking place in April 1915.

Regarded as two of the most elite boxers in the world, the competition between these fighters was fierce with 14 of their matches going to no decisions.

Wills would come out with the highest number of wins at six whilst Langford won just two of their meetings – both knock-out finishes.

Jack Britton and Ted “Kid” Lewis hold the third-highest amount of fights, facing each other in the ring 17 times between 1915 and 1921.

The two fought three times in 1915 alone, considered a high amount at the time despite how often boxers would take to the ring.

Most fights between two boxers in the modern era (since 1970)

While fights could be re-matched dozens of times in the past, no professional boxers have fought each other more than four times in the modern era (since 1970).

Despite that, the modern era has seen plenty of outstanding boxing rematches take place since 1970, with several high-profile names involved in some of the greatest boxing matches in history.

As the sport evolved, with television helping people from across the world watch fights, boxers were less required to fight as often as they had done in history.

Rematches between boxers were limited to shorter and more high-profile events with television helping grow excitement on a global scale.

Pongsaklek Wonjongkam and Daisuke Naito have fought each other the most since 1970 with a combined four fights, the last taking place on April 19th, 2002.

Fighting for the WBC Flyweight title, champion Wonjongkam knocked out Naito in 34 seconds, setting the record for fastest knockout in division history.

It was Wonjongkam’s fourth lineal title defense and second win over Naito in their four-fight series. The first match ended as a draw and Naito was victorious in their second meeting.

Manny Pacquiao and Juan Manuel Marquez also battled in a four-fight series, a clash widely regarded as one of the best series in the history of the sport.

Their showdown came on 8th December 2012 and was advertised as the ‘Fight of the Decade’ with the winner being unofficially billed the ‘World Champion of the Decade’ by the World Boxing Organisation.

Márquez defeated Pacquiao with one second remaining in the sixth round after knocking the Philippine fighter out.

Which boxers have fought each other four times? [Since 1970]

In the modern era, just two sets of professional boxers are known to have taken on each other four times. These contests were between Manny Pacquiao and Juan Manuel Marquez, as well as Pongsaklek Wonjongkam and Daisuke Naito.

Boxers Who Fought Each Other 4 Times:

Both Pacquiao vs. Juan Manuel Marquez and Wonjongkam vs Naito pushed to a four-fight series, an amount rarely seen in modern-day boxing.

Champion Walcott would overcome his opponent, walking away with a disputed 15-round decision and his title.

Their first three fights were in a row with Charles winning twice before Walcott was victorious in the third.

Willie Pep and Sandy Saddler also met in the ring four times from 1940-50, earning their places in the International Boxing Hall of Fame’s charter induction class of 1990.

A thrilling rivalry of the 1940s, it began in October 1948 when Saddler ended Pep’s six-year reign as World Featherweight Champion.

Pep would win just one of the featherweight fights on the 11th February 1949 in a 15-round unanimous decision, their second meeting.

An intense rivalry in the boxing world, the fights were considered the bloodiest battles ever in the division, further cementing them in the sports history books.

Whilst four-fight rematches have been well documented by the boxing community, they haven’t always reached the level of fame that some of boxing’s legendary trilogies have been able to.

Arguably the most famous trilogy in boxing is that of boxing greats Muhammad Ali and Joe Frazier.

At the time the first match was billed as the greatest publicized sporting event ever with it being the first time in history that two undefeated boxers fought each other for the heavyweight title.

Their rematch billed as Super Fight 2, was a non-title match on the 28th January 1974. Ali was named the victor by a close unanimous decision.

Billed as the Thrilla in Manila, their third and final fight on the 1st October 1975 was once again for the heavyweight championship of the world.

This time Ali was the champion and managed to retain his title, beating Frazier with a technical knock-out in front of a record one billion global television audience.

The fight is widely regarded as the most brutal fight in boxing history, with the two fighters now main figures in boxing and sport folklore.