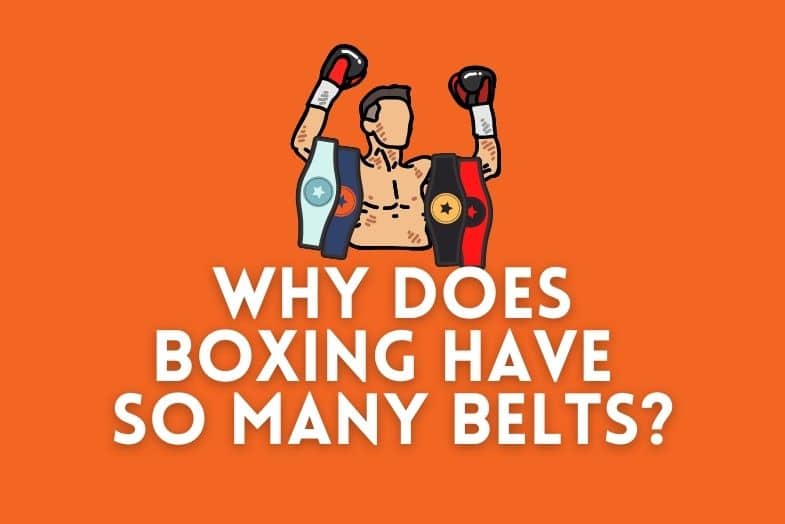 Since the dawn of humanity, hand-to-hand combat existed in different shapes and form. In modern times, professional boxing was perceived as the rightful heir to ancient gladiator sports – at least before the meteoric rise of Mixed Martial Arts (MMA) in the last 25 years years or so.

Boxing is often referred to as “the noble art”. However, some of the men who run this sport can be far from noble, and their main artistic talent is making money out of “world title fights”.

Therefore, the sport has become overwhelmed with numerous organizations and an excessive number of world titles.

But why do we have so many sanctioning bodies? How many world titles are there in boxing nowadays? Which are the most prestigious belts? And finally, does boxing need to change to reclaim its fading appeal?

Let’s get ready to rumble!

How Many World Title Belts in Boxing Are There?

If we’re only going to include the four major sanctioning bodies (WBA, WBC, WBO and IBF), we can assume that the number of World Title belts in boxing recognized by the fans is 68, as each organization has 17 weight class.

Answering this question isn’t as simple as it may first appear. We mentioned the four major sanctioning bodies, but there other organizations (IBO, WBU, ect…) who also happen to proclaim their title holders as “World Champions”.

On another note, some of the main organizations might recognize more than one World Champion in the same division at once.

The WBA is the most notorious in this regard. As explained by DAZN.com, the sanctioning body adopts a “Regular” and a “Super” titleholder. This can happen when the WBA World Champion wins another major title from another organization, he gets recognized as the “Super” WBA World Champion, while other two contenders fight for the “Regular” WBA title.

Moreover, it’s also worth mentioning interim belts, which are usually fought for when the main champion is out of action (mostly due to injury).

The WBC also awarded the so-called “Diamond” titles at some occasions to emphasize on the importance of the event, while “Emeritus” titles could be given to champions who retire from the sport with the possibility of coming back, serving as their claim to earn an immediate title fight upon their return.

Why Does Boxing Have So Many Belts?

Boxing has so many belts mainly because the promoters, the sanctioning bodies and even the fighters themselves will all be in line to make more cash from a fight branded as a “World Title Fight”.

Therefore, everyone involved with the sport benefited from the creation of such a large number of title belts (although it eventually became counter-productive).

This system allows a larger number of boxers to earn “World Title” opportunities, while the casual fan is much more likely to be attracted by a contest branded as a “World Title fight”.

Why Does Boxing Have So Many Sanctioning Bodies?

The reason behind the creation of numerous sanctioning bodies has been mainly due to internal disagreements and conflict of interests between the organizers of the sport.

To fully understand the situation we must take a look back at the circumstances behind the creation of every major organization, as explained by MKBoxing.com.

The World Boxing Association (WBA) is the oldest of the four major sanctioning bodies. It was formed in the United States in 1962, but its roots go back to the 1920’s. The organization faced corruption charges in the 1980’s, with promoter Bob Arum claiming that he had to pay WBA officials to obtain better rankings for his fighters.

The World Boxing Council (WBC) came to light in 1963. It was founded in Mexico, and its belts have been held by some of the greatest fighters in the history of the sport – the likes of Mohamed Ali, Sugar Ray Leonard and Floyd Mayweather.

The International Boxing Federation (IBF) was founded in 1983 on the heels of Bob Lee’s failed attempt to become president of the WBA, and thus, he decided to split from the latter organization alongside his supporters and form a new governing body. The IBF’s headquarters are currently located in New Jersey, USA.

The World Boxing Organization (WBO) was also formed following a split from the WBA. In 1988, a group of Puerto Rican and Dominican businessmen broke out from the WBA convention after arguments concerning the adopted rules, and they decided to form their own sanctioning body. The WBO earned fame thanks to the high-calibre fights in its lighter weight classes. It was later recognized by the WBC in 2004 and subsequently by the IBF in 2007.

Boxing Belts in Order of Prestige

With four major organizations all being recognized by fans and observers alike, picking the most prestigious belt remains somewhat subjective. However, the vast majority of observers consider the WBC belt to be the most reputable due to the great names who held it in the past as well as the present.

The WBA is the oldest recognized organization amongst the current major four sanction bodies, but some believe that the IBF has usurped it in terms of prestige. While all governing bodies of the sport had their fair share of controversies and corruption scandals, the WBA arguably took the biggest hits in this regard.

As the most-recently recognized organization, the WBO still finds itself just outside of the podium spots.

Finally, the IBO and WBU remain on the outside looking in. Perhaps it’s not completely their fault, but at a certain point, boxing fans felt that four world champions in one division is more than enough, which explains why title holders in these organizations aren’t truly recognized by the public as “World Champions”.

Does Boxing Need to Change?

Since the turn of the new century, boxing has been losing ground in favor of MMA which has arguably become the most popular combat sports in the world.

Some would complain about the monopoly that currently looms over MMA, with the Ultimate Fighting Championship (UFC) reigning supreme over the sport.

However, the UFC’s dominance gave the sport one recognizable champion since the fall of its competitor – PRIDE – in 2007. Therefore, when a UFC champion claims to be the best in the world in his weight class, it’s difficult to argue otherwise.

On the contrary, some of the biggest names in boxing spent their careers collecting belts left and right, while dodging their main competitors, who were instead handed other titles to brag about.

Such a scenario is rarely seen in MMA. With one organization calling the shots, and fewer weight classes, UFC champions have nowhere to hide, and whether they like it or not, they’ll end up locked in the same cage with their most deserving challengers multiple times per year.

Unfortunately for boxing, as long as the four major organizations are making money out of the current system, we’ll continue to witness multiple champions in the same divisions all claiming to be the best, and whether they decide to settle the debate in the ring or not remains based on the financial interests of those who run this sport.