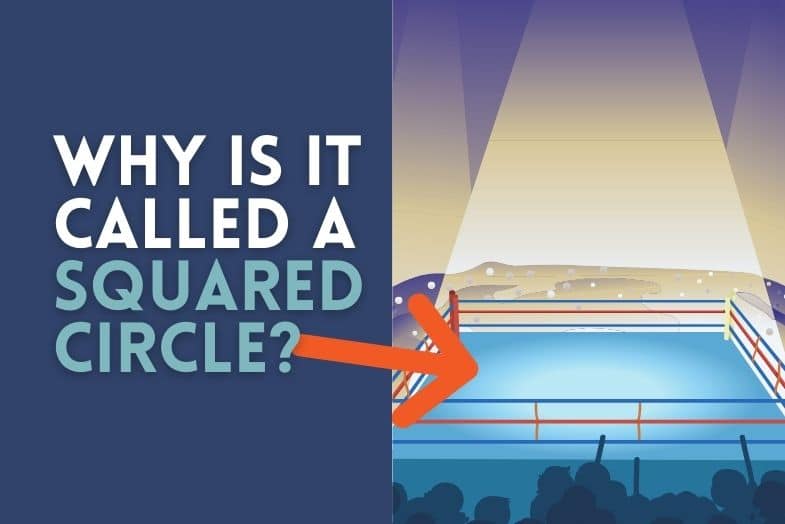 The ‘squared circle’ is one of the most common names used in the boxing community when talking about the ring. Whilst the layout of boxing rings has changed largely over time, the name has maintained its place in fighting vocabulary despite it technically being inaccurate.

So why is it called the ‘squared circle’ by so many? And why did the ring change over time?

Join us as we go through the history of the name and how it grew to be used in modern-day boxing.

Why is a Boxing Ring Called a Ring When It’s Square?

During the early days of organised boxing, fighters began to fight inside roughly drawn circles on the ground, surrounded by spectators. After boxing started using a squared ring, the term ‘ring’ remained a relic of how the sport originated.

When people first started to watch the fighters box, a circled ring made it possible to maximize the viewing area around the fight while also establishing a contained boundary to keep the boxing in a managed area.

Introducing a lined circle on the ground was designed to protect the boxers from the fans as well as maintain the integrity of the match. Spectators would often get too close to the fight and interfere, ushering in the need for a clear ring to contain fans of the sport.

Why is a Boxing Ring Called a ‘Squared Circle’?

Known as a ‘ring’ due to its history of beginning as a circle on the ground, the name ‘squared circle’ became a common term for a boxing ring after a squared ring was introduced in the 1830s under the new London Prize Ring Rules.

Despite the ring’s new shape, the term ‘ring’ was so ingrained in boxing vocabulary that it became the standard colloquial name for the boxing community.

The modern boxing rules were a drastic change from standard rules before the 18th century – often known as ‘Broughton rules’. At those times, boxing matches had no mandated boxing ring, no gloves and no referee making the new rules a safer and more secure way of growing the sport.

Modern boxing rings are usually set at 18-22 feet per side and bound by four ropes, a change from the first traditional squared boxing ring which was set at 24 feet.

Why are Fighters’ Corners Different Colours?

Set as red and blue posts, the fighter’s corners depict where each boxer is to enter and exit the ring from as well as sit/rest in-between rounds.

In the early 18th century, boxers would flip a coin to decide which fighter would be placed in which corner.

The introduction of televised boxing matches dictated a change as networks and other TV companies were able to have a say in which boxers sat in specific corners. The main reason for this was so the favourite fighter or expected winner of the clash could be seen easily on camera between rounds.

Most fight cards now have a designated ‘winners’ and ‘losers’ corner with the televising network able to inform the promoter which fighter they want in the winner’s corner.

For undercard fights, fighters who are expected to win will also be placed in a specific corner, however, this is the promoter’s call as they will be untelevised.