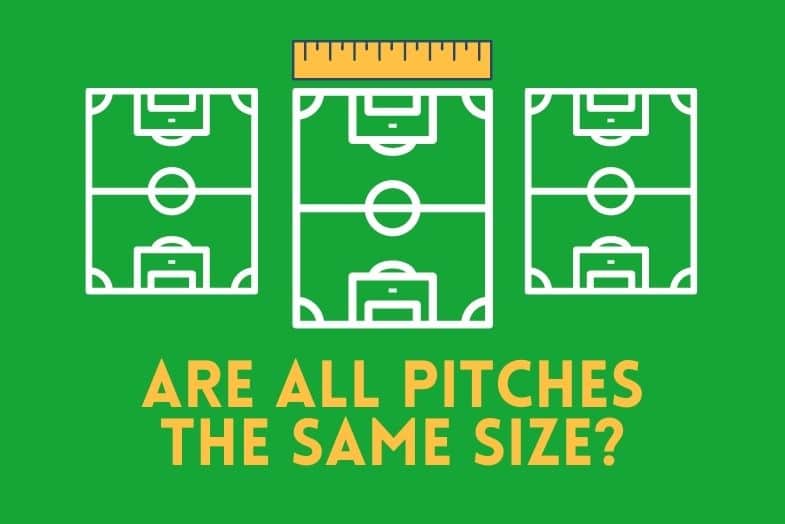 Do you ever get the feeling that when your club plays at certain stadiums, they just seem incapable of getting the ball? Watching your club chase the likes of Manchester City, Barca and Bayern Munich can lull one to sleep before a flurry of goals puts your club down 3-0 in no time.

But did you know that pitches can be suited to different playstyles? Artificial fibres or grass surfaces can affect the speed of the game. However, pitch size dimensions can also vary according to the regulations of each governing body. This means home sides that like to pass can opt for slightly bigger pitches and more space.

And the Joses and Pulises of the world can opt for tight compact pitches that let them park the bus until the apocalypse! But in most other sports, every pitch, field, or court is the same size. So how big is a football pitch?

Do All Football Pitches Have to Be the Same Size?

Football pitches do not have to be the same size. The length and width of any football pitch must fall into the regulations of its respective league or governing body. FIFA states that pitches must be between 90 and 120 m long and between 45 and 90 m wide.

Do Football Pitches Vary in Size?

Football pitch dimensions vary but the average pitch is 105 m x 68 m. The goalines and touchlines of a pitch must fall between the minimum and maximum limits. These regulations will normally be defined by FIFA or an appropriate governing body.

How Big Can a Football Pitch Be?

A football pitch can be as big as the regulations allow. The two touchlines must be equal in length and longer than that of two equal goallines in width. This means that pitches can be both the maximum allowable length of width according to the governing body of the match to be played.

The largest football pitch in La Liga is Getafe’s Coliseum Alfonso Perez at 105 m x 77 m. While in the Premier League, Manchester City’s Etihad is the largest at 106 m x 70.5 m in size. In contrast, Wembley is larger in capacity but with a smaller pitch at 105 m x 68 m.

How Small Can a Football Pitch Be?

A football pitch can be as small as the regulations allow. The regulations depend on which league or international body is governing the match. Each organization has its own rules on dimensions. So any pitch only needs to meet the minimum requirements of length and width.

Why Are Football Pitches Different Sizes?

This rule has been adopted in spirit by football governing bodies worldwide, but with some variation. For international matches, pitch size is reigned in by tighter rules. Regulations allow for a width between 64 and 73 m and a length between 100 and 110 m.

Football pitches vary in size because the rules of the game can be traced back to the original codification of Association Football. While many rules have been updated in the past century, football pitch size diversity is just a quirky part of the beautiful game.