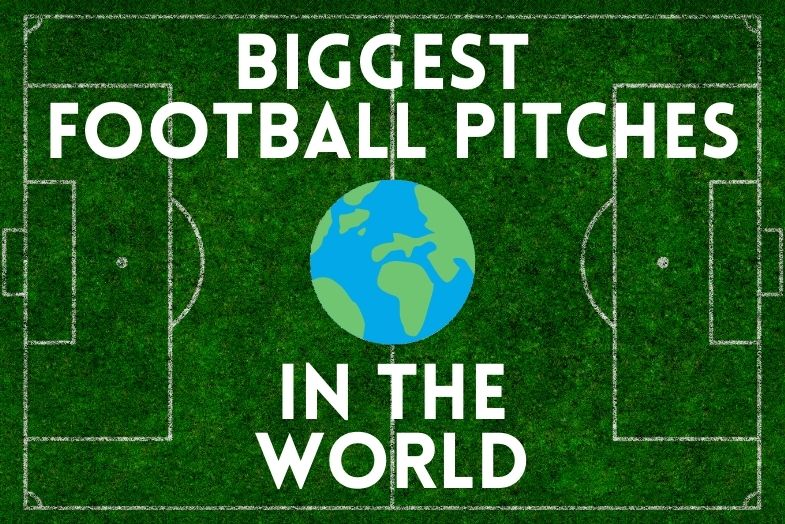 If you have ever played football on a full-size pitch you will know how big they can feel. Especially if you’re more used to having a kickaround on smaller, 6-a-side pitches.

How Big Are Football Pitches Allowed to Be?

In England, football teams follow rules set out by the International Football Association Board (IFAB). It states that football pitches must be between 100 and 130 yards long and 50 to 100 yards wide.

Thanks to these general guidelines, not all football pitches are the same size. Teams have the freedom to create pitches as large or small as they would like, within the above parameters. However, other factors like the size of the stadium or how close the fans are also determine the size of a pitch.

IFAB’s pitch dimension rules mean, in theory, you could have a completely square pitch. Which would certainly be unusual but might give a team added home advantage.

Competitions that teams are involved in may also dictate what size pitches must be. There is less scope for a difference in pitch size in UEFA competitions, for example.

UEFA’s competitions allow for pitches to be between 110 and 115 yards long and 70 to 75 yards wide. This is why teams in the Champions League tend to have similar-sized pitches.

The size of a team’s pitch can dictate how they play the game. For example, Old Trafford’s large pitch during Manchester United’s dominant period in the Premier League allowed the Red Devils to play free-flowing, attacking football.

If teams came to Old Trafford to simply defend and hope for a 0-0, it was more difficult to defend deep as there was more space. The gaps between defenders are greater on a large pitch making it harder to keep a clean sheet.

On the flip side, with such a large pitch, there is plenty of space to exploit behind defenders on the counter-attack.

Here are some of the pros and cons associated with big football pitches:

What’s the Biggest Pitch in England?

These smaller Premier League pitches allow for the fans to be right on top of the action. At grounds like Selhurst Park and Anfield, the fans can become the 12th man and intimidate the opposition much more easily.

Although the IFAB has set out a guideline for pitch sizes, there are huge differences around the grounds of top teams. While many pitches measure well short of the maximum allowed, some teams like to push the boundaries and go big.

For instance, Wembley’s pitch could be the biggest in the world if all of the playing surface was used. However, as the FA follow FIFA and IFAB rules the pitch dimensions are 115 x 74 yards.

The Estadio Manuel Martínez Valero, owned by Spanish club Elche, is one of the biggest pitches in the world. It measures a colossal 118 x 77 yards, several yards longer and wider than the IFAB and FIFA guidelines.

We have already mentioned the Etihad as one of the biggest pitches in England but it’s also one of the world’s biggest playing surfaces. With dimensions of 116 x 77 yards, Manchester City’s superstars have all the space they want to show off their skills.

Getafe might be known recently for defensive football but they have shown it can be done on a large pitch. The playing surface at Getafe’s Coliseum Alfonso Pérez measures 115 x 77 yards, giving plenty of space down the wings.

Real Sociedad in La Liga is another club that gives its players the freedom of a large pitch to showcase their talents. Real Sociedad’s Anoeta pitch dimensions are exactly the same as Getafe’s at 115 x 77 yards.

It seems that the majority of large pitches can be found in Spain as Real Betis rounds out our top five biggest pitches. Betis’ Benito Villamarín pitch measures 117 x 74 yards, which is larger than FIFA’s ideal size.