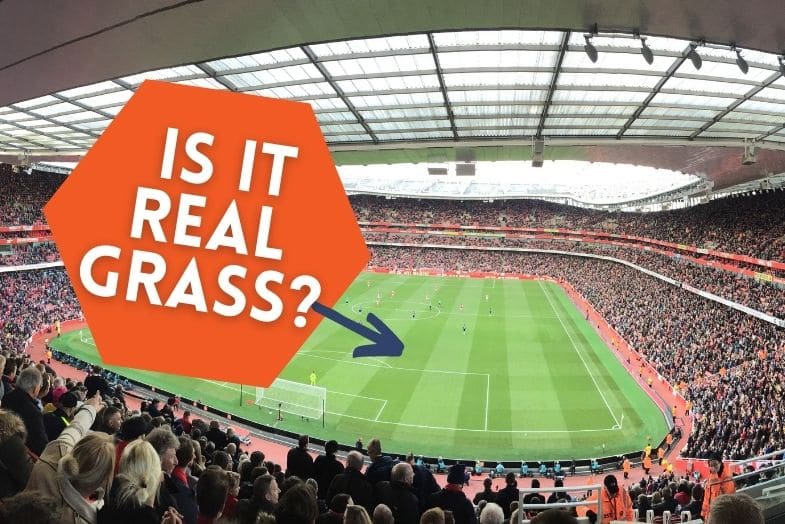 Premier League pitches are looked upon with envy compared to some of the grounds lower down the football pyramid. If you’ve ever dabbled in some Sunday League football you will have played on your fair share of muddy bogs. Avoiding dog poop and discarded beer cans is par for the course, not to mention coming home completely caked in mud.

We’ll be exploring if Premier League pitches use real grass or if top-level groundskeepers have some trickery up their sleeves.

Arsenal was one of the first teams in the Premier League to take extra special care of its pitch and it showed during the 2000s. By keeping a perfectly flat surface, Arsenal could play the free-flowing football Arsene Wenger’s team became known for. In time, the rest of the Premier League would catch up but regular games at Highbury for Gunners fans were a joy to watch.

When Arsenal moved to the Emirates Stadium, much of the league’s playing surfaces were on par so the advantage was lost. Some might argue that no longer owning their stadium also had an impact on Arsenal’s fortunes.

What is a Hybrid Football Pitch?

Hybrid pitches use a combination of real and artificial grass. This is commonly around 95% natural and 5% synthetic. These pitches are effective because they can endure more playing hours while also recovering faster than 100% natural grass.

What Grass is Used on Premier League Pitches?

Premier League football pitches are almost exclusively hybrids. One of the main grass suppliers for Premier League pitches is GrassMaster. GrassMaster brings its hybrid pitches to the biggest football clubs in the world. Teams like Juventus, Real Madrid and Barcelona use GrassMaster’s playing surface.

It’s not just global football that GrassMaster is involved in, however. Grassmaster also provides playing surfaces for American football and rugby pitches.

Old Trafford uses a combination of natural and artificial grass. It was installed by GrassMaster in 2013, and this surface was later installed at Manchester United’s Aon Training Complex.

Wembley’s hallowed turf is an artificial hybrid. Artificial grass has been woven into the playing surface at Wembley since 2019. Those artificial grass blades have been stitched into layers of sand beneath the surface. In total, 97% of the Wembley pitch is natural and 3% artificial.

How Long is the Grass on a Premier League Pitch?

Premier League rules state grass should not be above 30mm in height. This is checked by match officials before games and it must be consistent across the entire pitch. Pitches must display straight parallel lines and cannot use elaborate grass designs, like circles, for instance.

Standards must be maintained and, when watching football, you may notice the difference when the grass is slightly longer. Teams like Burnley have been accused in the past of deliberately leaving the length of their grass longer to help slow up the game.

This tactic is commonly applied against the ‘big’ teams that play a fast, possession-based style of play. Couple longer grass with the groundskeeper ‘forgetting’ to water the pitch before kick-off and it can be an enduring 90 mins for top managers.

As well as ensuring the grass length is a certain height, football pitches must be a certain size. Despite the guidelines, not all Premier League pitches are the same size.