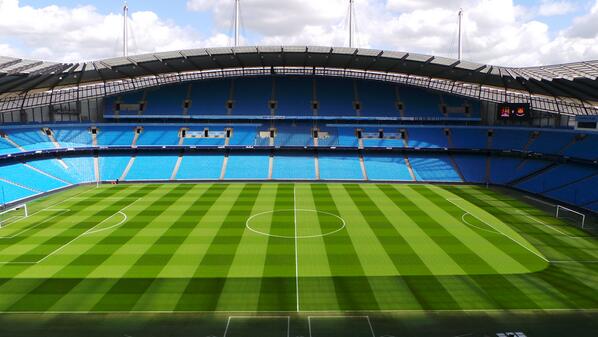 In a word: no. The 20 top-flight clubs’ turfs vary in dimensions, but (pardon the pun) does that make it a level playing field? Should there be regulations for single-size pitches across the Premier League? And what are the biggest and smallest ever seen?

As you can see, there is a fair bit of variation in pitch sizes between the 20 teams, with Crystal Palace, Leicester City and Liverpool all home to the league’s three smallest turfs. Given Selhurst Park and Anfield are two of the oldest top-flight stadiums, opened in 1924 and 1884 respectively, it may come as less of a shock to see them among the tightest, with fans at each ground a hair’s breadth from the players.

Leicester, though, is somewhat more somewhat more surprising, given their King Power Stadium has only housed them since 2002, while similarly new grounds such as Brighton’s Amex Stadium, Manchester City’s Etihad Stadium and West Ham’s London Stadium, boast some of the largest pitches in the league.

Should Football Pitch Dimensions Be The Same?

Honestly, it’s hard to imagine it making an enormous difference. It may be one of the easiest straws for losing managers to clutch at, but let’s look at the stats: only Huddersfield’s John Smith’s Stadium saw fewer Premier League strikes in 2018-19 than Palace and Leicester. But by the same token, only the Etihad Stadium outscored Anfield. Huddersfield finished rock-bottom, while Man City and Liverpool finished in the top two with 98 and 97 points respectively, so the quality of teams still rules to a great extent.

Ultimately, they’re all of fairly similar size anyway, so should it matter? Besides, almost all of them adhere to the Premier League’s regulations of roughly 115 by 74 yards, and the ones that don’t at least follow these five rules set in place by the league about football pitch dimensions:

K.15. – Unless otherwise permitted by the Board, in League Matches the length of the pitch shall be 105 metres and its breadth 68 metres.

K.16. – The Board shall only give permission to a Club for the dimensions of its pitch to be other than as set out in Rule K.15 if it is impossible for it to comply with Rule K.15 due to the nature of the construction of its Stadium.

K.17. – A Club shall register the dimensions of its pitch before the commencement of each Season by giving written notice thereof in Form 8 to the Board.

K.18. – The Board may at any time require a Club to obtain and submit to the Board a report by an independent expert certifying its pitch dimensions.

K.19. – No Club shall alter the dimensions of its pitch during the Season without the prior written consent of the Board.

In short, the only people it should really affect are the groundsmen; as the smallest pitch in the competition, you can imagine Palace’s are the envy of the rest of the league.

How Big is a Football Pitch in Metres?

While English football still follows imperial measurements (i.e. yards) for the most part, other countries now use the metric system. The recommended Premier League pitch size is 115×74 yards, which equates to 105×68 metres.

How Long is a Football Pitch?

The recommend length of a Premier League football pitch is 105 metres (115 yards). However, according to Football Association regulations, pitches can be anywhere from 90 to 120 metres (100 to 130 yards) long.

At 116 x 77 yards, the Etihad remains the largest pitch English football’s top-flight has seen since the Premier League began in 1992. Old Trafford runs it extremely close at 116 x 76 yards, as does the new Wembley (used for Tottenham Hotspur during the 2017-18 season and most of 2018-19).

As for the smallest, don’t be fooled into thinking grounds with the lowest capacity must have the smallest pitches. Far from it, in fact; West Ham’s old stadium, Upton Park, is among the tiniest, measuring just 110 x 70 yards, as was Spurs’ former home, White Hart Lane, at 110 x 73 yards.

For the record, the Premier League stadium with the lowest capacity in its history – Bournemouth’s Dean Court – is one of the top-flight’s biggest, at 115 x 71 yards.