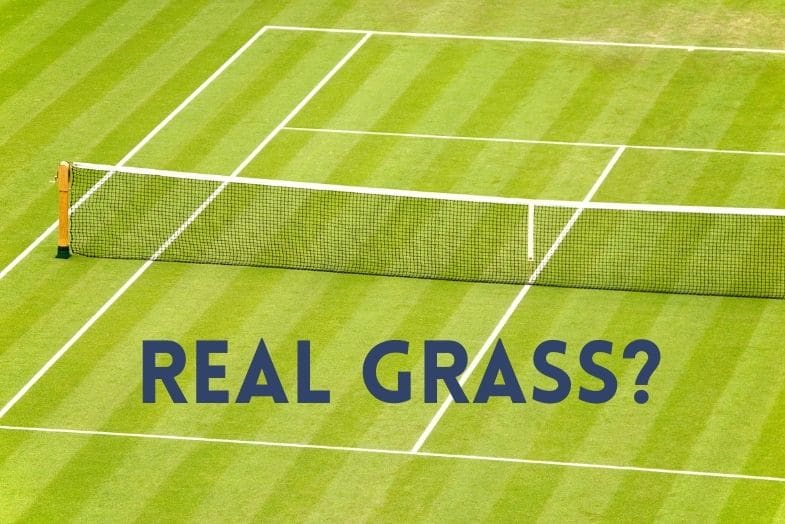 From January to November, the tennis season is filled with exciting events and tournaments played all over the globe.

Nonetheless, no other tournament can recapture the unique charm of Wimbledon. Every July, sports fans span their attention towards the southwest London district to witness tennis at its finest.

Between its historical importance and its affiliation with British royalty, it’s hard to resist the magic of the third Grand Slam of the calendar year. And let’s not forget about the major prizes.

But one of the most fascinating aspects of Wimbledon remains the green grass courts, which is a sight to behold on its own, especially at the early days of the tournament, when it’s still fresh and appealing to the eye.

So are the courts at Wimbledon real grass? Why are they slower and slippery? And are these courts in use during the rest of the year?

The short answer is yes, the courts at Wimbledon contain natural grass. To be specific, it is made up of 100 percent Perennial Ryegrass, as confirmed by Wimbledon’s official website. This is contrary to football pitches that usually adopt hybrid grass (a mix between real and artificial grass).

This type of grass is renowned for its swift growth as well as durability, which makes it perfect for sports events in general and tennis in particular. Experts now believe that a length of 8mm is the best option for present-day play and survival.

What Kind of Grass is on Wimbledon Courts?

As explained by Tennismajors.com, this change could have been prompted by the outcome of the men’s final 2001 contested between Goran Ivanisevic and Pat Rafter. The two unlikely finalists heavily relied on serve and volley, which meant that very few rallies were witnessed throughout the match.

Therefore, changing the grass type resulted in a more durable and harder surface, which allowed the ball to bounce higher, and ultimately aided in slowing down the speed of play, plus allowing the viewer to witness a more entertaining showing that contains more back-and-forth action, rather than watching two tall players smashing serves at one another.

Why Are Wimbledon Courts Slower and Slippery?

Since changing the seed mix to 100 per cent Perennial Ryegrass following the 2001 final, the gameplay at Wimbledon has become noticeably slower. On the other hand, London’s typically wet conditions cause the courts to become slippery at times.

Therefore, the fans have become accustomed to witnessing players slipping on Wimbledon courts, which is a more recurrent sight compared with other tennis tournaments. Even during the summer, the weather at the English capital can be relatively humid which in turn moisturizes the grass further, increasing slickness levels.

Are Wimbledon Courts Used All Year?

Wimbledon’s Centre Court and other show courts are only used during the yearly tournament. As for the other grass courts, they’re accessible between May and September, as the weather conditions prevent their use during the the rest of the year.

On the contrary, club members and players sponsored by the LTA (the national governing body of tennis in Great Britain) can use Wimbledon’s eight American clay courts all year long.