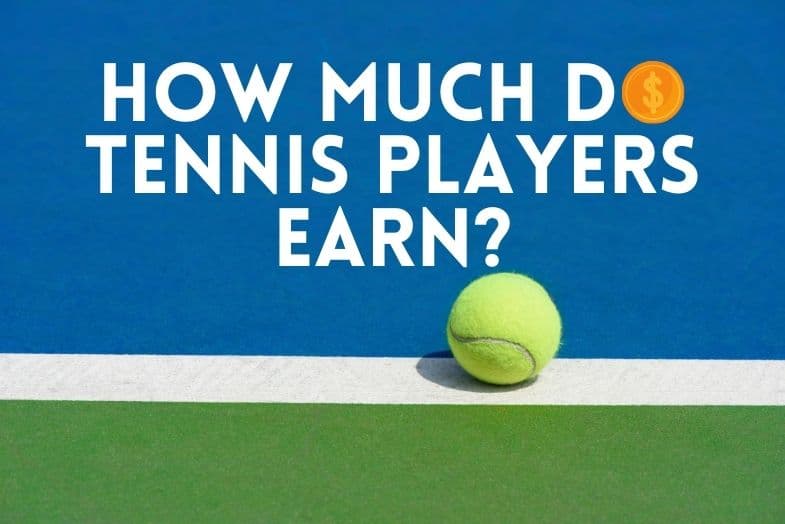 In general, sports can be divided into two large categories: Team sports and individual sports.

In team sports, such as cricket, athletes are often eager to earn a lucrative contract that provides them financial security for several years to come (based on its length). These contracts signed with clubs are considered to be the player’s main source of income in the vast majority of cases.

On the other hand, athletes who compete in individual sports don’t enjoy the same luxury. Every player serves as his own boss, and this means that he has to work extremely hard throughout the calendar year if he wishes to maximize his income.

This is the case of tennis players who endure a gruelling schedule (and a weird scoring system for that matter) in order to make a living.

So how exactly do tennis players earn money? What are their main sources of income? and most importantly, how much do they make?

We’ll SERVE you the answers (excuse the silly pun).

How Much Do Tennis Players Make?

Reminiscently to every other sport, the income of professional tennis players vary based on the player’s ranking, success on the court and his fame. According to Perfect Tennis, the average earnings of a male tennis player in 2021 ranked between one to one thousand in the world were $185,106.59.

However, it should be noted that this figure could be misleading, as the vast majority of players ranked amongst the first 1000 earn significantly less than the figure mentioned above.

As we’ll notice by the numbers that we’ll post below, the elite tennis players can make astronomical figures per year, which significantly lifted the average, painting a rosier picture.

But in reality, the great majority of tennis players (males and females alike) are far from living a luxurious lifestyle.

In this part, we’ll take a look at the average income earned by professional male and female tennis players in 2021, once again based on the stats provided by Perfect Tennis.

Tennis players have six main sources of income. While prize money earned during tournaments is the most important, the athletes can also earn cash from appearance fees, sponsorship deals, exhibition fees, bonuses and club tennis deals, as explained by MyTennisHQ.

When it comes to prize money, we’re talking about the figures that the player earns each time he advances to the next round in a tournament. Of course, these numbers vary based on the level of the tournament, with the four Grand Slams being considered as the top of the echelon.

Let’s take a look at the prize money earned at every stage in three different tournaments. The first is the 2019 US Open (the final Grand Slam of the season), the second is a 125 Challenger tournament (usually consisted of players ranked between 80 and 200) and the third is a 25K Future tournament (containing players ranked anywhere between 500 and 1500).

As one can notice, there’s an enormous difference between the prize money handed in a Grand Tournament and its smaller counterparts. A player who manages to qualify to the first round of a Grand Slam earns more than the double of the payment received by the winner of a 125 Challenger.

As for the other sources on income mentioned above, sponsorship money also vary according to the player’s general status.

On the other hand, bonuses can add an additional incentive for players to go far in tournaments. Sponsors want more exposure, and the more appearances their representative makes, the happier they’ll be, which explains why sponsorship deals can contain a bonus clause.

Moreover, exhibition matches offer a chance for some of the elite players in the world to pocket some additional money all while enjoying a semi-competitive competition away from the intensity of the big tournaments. For instance, Roger Federer earned 8 million dollars just for playing four exhibition matches in South Africa.

As for club tennis, they allow some of the less renowned players a chance to grab some cash while taking part in the summer leagues.

But what about appearance fees?

Although it would extremely hard to find official numbers in this regard, it is known that the best players in the world receive an appearance fee to take part in smaller ATP tournaments.

While the elite players can afford to take a break and skip some of the less prestigious events, the organizers will always attempt to lure them in by offering them a certain sum of money that varies between one star and another.

It is said that Federer charges around $1.1 million in order to make an appearance in the smaller tournaments, while the likes of Rafael Nadal and Novak Djokovic demand figures close to $900,000.

After earning prize money, a tennis player will be required to pay taxes in accordance with the laws applied in the country or state where the tournament took place, as explained by MyTennisHQ.

This basically means that prize money earned in Wimbledon for instance, will be taxed according to British laws, and in the exception of some tax havens like Monaco, the tax rates could be relatively high.

Do Tennis Players Earn a Lot of Money?

Based on everything stated above, we can say that the elite tennis players earn a lot of money. Moreover, those who are ranked amongst the the best three hundred players or so earn decent figures.

The best tennis players in the world surely earn more than elite darts players for instance, but they aren’t as handsomely rewarded as F1 drivers.

However, the rest of the professional pool earn humble figures which could force them to have another occupation to help them paying their bills.

So in conclusion, if you want to be a professional tennis player, you better be pretty good at it.