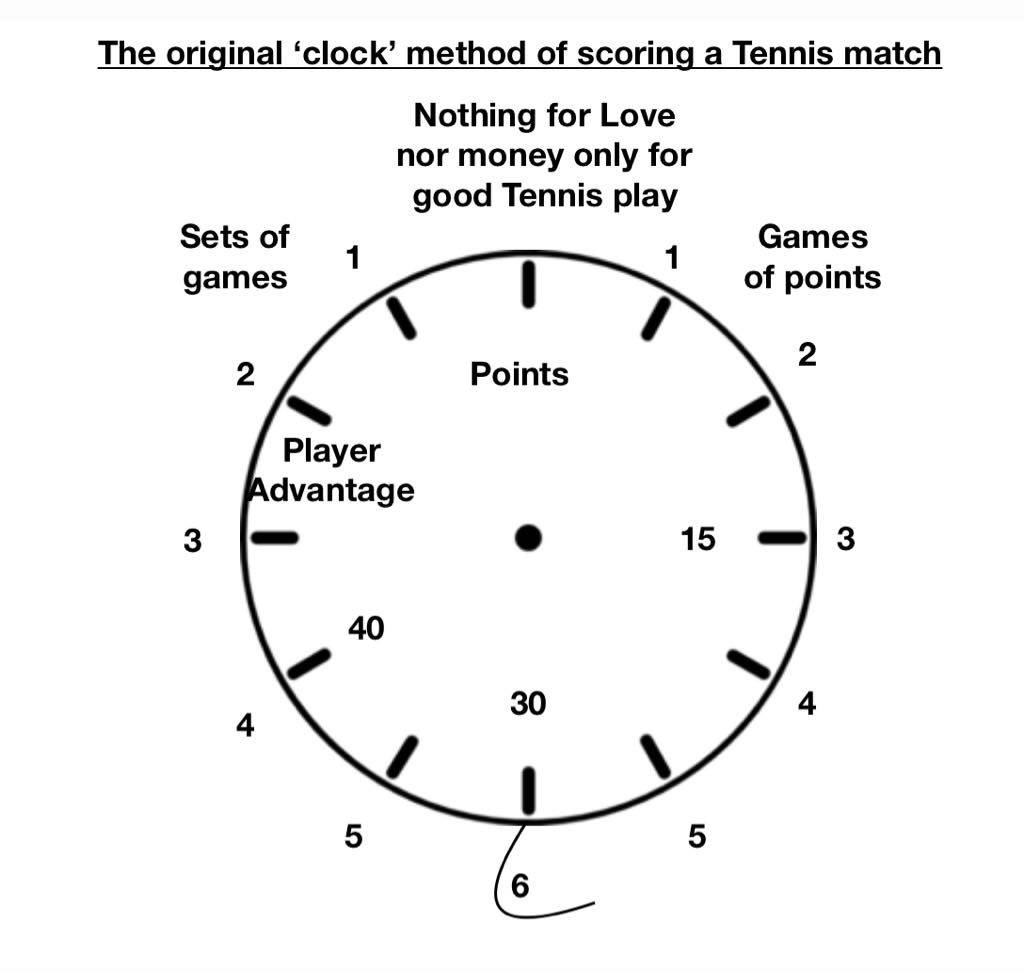 It’s easy in football. You just add one to the score every time your team finds the net. In rugby union you simply award five points for a try, three for a penalty or drop goal and two for a conversion kick. In cricket you need only count the number of runs scored and wickets lost by each time. All of which is pretty straightforward to get your head around.

How Is Tennis Scored?

First of all, in case any memories need refreshing, let’s go over how a game of tennis is scored.

A set consists of at least six games, and is decided when one player has won six games with a margin of at least two over their opponent (e.g. you can win a set 6-3, but not 6-5). If a set is tied at six games apiece, a tie-breaker may be used to decide it.

Why Is Tennis Scored The Way It Is?

The origin of the tennis scoring system of 15, 30, and 40 is believed to be medieval French.

Some believe that clock faces were used to keep score on the court, with the minute hand moved to indicate a score of 15, 30 or 45. When it struck 60, the game was decided. But to ensure the game couldn’t be won by a one-point margin, the ‘deuce’ was brought in (‘deuce’ goes back to Old French, meaning ‘deux’ (two)).

To make the score stay within the ’60’ ticks on the clock, 45 was then supposedly changed to 40. That way if both competitors were stuck on 40 points, the first player to score would receive ten, and moving the clock to 50. If that same player won the next point, they would win another ten points and the clock would hit 60. If not, the clock would move back to 40 and we would return to ‘deuce’.

There is another theory, too. Some believe the scoring system derived came from the ‘jeu de paume’ (a game which preceded tennis, initially using the hand rather than a racket).

As for the term ‘love’, this likely comes from the French translation for ‘egg’ (œuf) because an egg looks like the number zero. Yes, really.

Another theory is based on the idea that, at the start of any match, when scores are at zero, players still have ‘love for each other’. I prefer the egg idea, personally.

Why Is Tennis Called ‘Tennis’?

Though the game seems to date back to the 12th century, having supposedly been invented by monks, the word ‘tennis’ came into the English language in the mid-14th century.

It is derived from Old French, via the Anglo-Norman term ‘tenez’, which can be translated as ‘hold’, ‘receive’ or ‘take heed’, a call from the server to the opponent indicating they are about to serve.