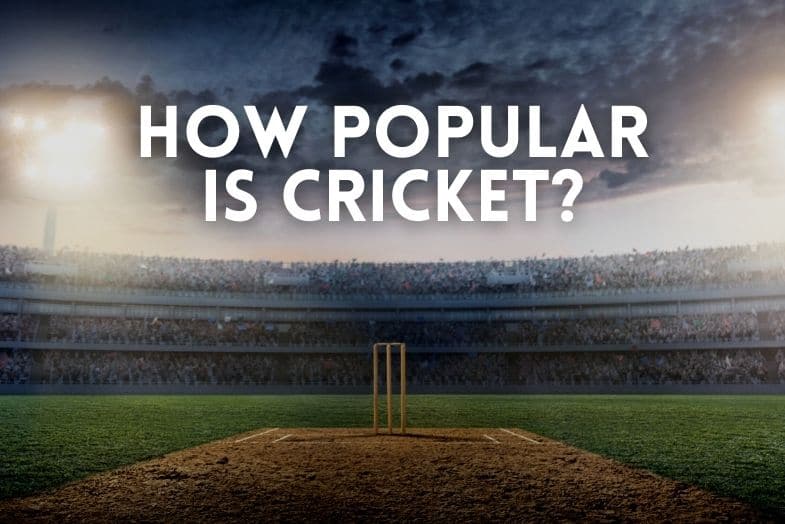 If you look at the statistics, you will learn that cricket is the second-most watched sport in the world behind football, which will probably come as a surprise if you are Mexican, Japanese, Brazilian or American.

That’s because cricket is still a niche sport in geographical terms – it is only played professionally in a few countries, but where it is played it is hugely popular among its devotees in countries such as India, Sri Lanka, Pakistan and, yes, England.

So just how popular is cricket, how many people play it and which countries have the most devoted and involved fans?

How Many People Play Cricket?

Although there are only around 4,200 professional cricketers in the world, it is estimated that the game is actually played by around 30 million registered players, with the vast majority of these playing in Asia.

According to the International Cricket Council (ICC), the sport’s governing body, the sport is played at some level in over 120 countries.

Is Cricket a Popular Sport?

Cricket is a hugely popular sport – it is estimated that around 2.5 billion people follow it around the world, with the majority of these fans found in the Asian countries of India, Pakistan, Sri Lanka and Bangladesh.

Cricket is also extremely popular in all of the other countries that play Test cricket, which remains a rather exclusive club.

Test-playing nations (and date of their first Test match):

Why is Cricket Not That Popular?

Cricket is often viewed, rightly or wrongly, as a complicated, slow-moving and “boring” sport, which has led to a stereotypical view of it being difficult to follow and get excited about, and hence it lacks popularity in some quarters.

So while literally millions of children and adults take to the streets of cities in the likes of India and Pakistan to play the game, in other, uninitiated, countries the game is almost unheard of, or entirely overlooked.

Is Cricket Getting More Popular?

The popularity of the shorter forms of cricket, and particularly T20 cricket, is undoubtedly increasing, while there are fears that the longer-format Test cricket needs to do more to promote itself to a younger and wider audience to maintain or increase its popularity.

The ICC is determined to increase the popularity of the sport by making further strides in untapped markets such as America and China.

Where is Cricket Most Popular?

The figures in the table above, provided by the Federation of International Cricket Associations (FICA), back up the view that India is cricket’s world powerhouse.

Interestingly, all of the countries in this table, except Afghanistan, are former British colonies, proof that the game was initially spread across the globe by those who left Britain to travel the world during the 18th and 19th centuries.

Cricket has since become a sport that has proved immensely popular in these countries and further afield, and particularly in the “sub-continent” countries of India, Pakistan, Sri Lanka and Bangladesh.

Cricket popularity by country, based on internet searches for the term “cricket”:

Some of the countries in this list might raise a few eyebrows, but it provides evidence of the wider reach of cricket outside of its “traditional” handful of strongholds.

This is emphasised when we look at the countries that have competed in the Cricket World Cup since its inception in 1975, and particularly in recent years when the number of teams competing in the tournament has been expanded.

Countries to have competed in the Cricket World Cup:

How Popular is Cricket in England?

Cricket is England’s traditional “summer sport” and the second-most popular sport overall behind football. According to an Active Sport England 2020-2021 survey, an estimated 181,000 people play cricket at least twice a month, and it is thought around 65% of the population follow cricket in some way.

How Popular is Cricket in Ireland?

Ireland was granted first-class status by the ICC in 2017, and success in the World Cup has seen cricket’s popularity increase; there were over 1000 cricket clubs playing the sport in Ireland in 2019, and an estimated 25,000 children playing the game.

How Popular is Cricket in India?

Cricket is a religion in India – the vast majority of the country’s 1.1 billion population follow it, there are dozens of first-class sides, the Indian Premier League is the sport’s richest competition and the biggest names, such as Virat Kohli and Sachin Tendulkar, enjoy a God-like status.

How Popular is Cricket in Australia?

Like England, cricket is Australia’s “summer sport”. The 2019 census revealed there were over 1.5 million registered players (around 1 in 20 Australians), and around 90% of the population watch some sort of cricket on TV each year.

How Popular is Cricket in New Zealand?

Cricket is the second-most popular sport in New Zealand behind rugby, and the number of people playing the game is increasing, arguably because of the success of the national team, who are the current World Test Champions. There are around 170,000 registered cricketers in the country.

How Popular is Cricket in the USA?

Despite first being played by British colonists, cricket remains a niche sport in the USA, generally played at an amateur level by around 200,000 players, which equates to less than 1% of the population. The national team largely consists of expatriates from traditional cricket-playing countries.

How Popular is Cricket in the West Indies?

The West Indies is a traditional hot-bed of cricket, and despite a recent downturn in the international side’s fortunes on the pitch, and competition from the likes of football and basketball, the sport remains arguably the most popular in the Caribbean islands.