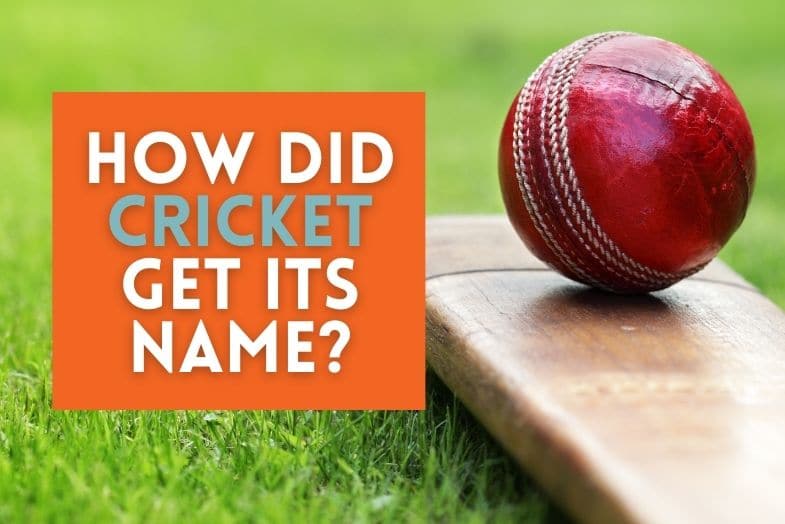 Despite the huge, and growing, popularity of cricket, the origins of both the sport and the name ‘cricket’ are still disputed.

Surely cricket is English in origin? Perhaps, but it is not certain.

Time then to investigate the roots of the game and why the sport loved and played by millions across the globe came to be known as ‘cricket’.

As with the origins of so many famous sporting names, we have to dig a little into history.

A Short History of Cricket

One prominent theory put forward in the cricket ‘bible’ Wisden is that cricket began as a game played by children in the south of England as long ago as the 1550s.

However, some experts on the sport’s history believe that it actually originated in Flanders, in modern-day France and Belgium, and that the game itself is Flemish in origin, not English.

What is known is that the earliest record of adults playing cricket dates back to 1611, when two men were fined for playing the game on Easter Sunday instead of attending church.

The game’s popularity spread around Britain and further afield in the 18th century, and the world’s most famous cricket ground – Lord’s – opened in London in 1787.

Eight new clubs were formed in England in the 19th century and formed the basis of the first County Championship, which remains a staple of domestic cricket today.

The sport’s popularity grew around the British Empire in the mid-19th century, and Test cricket expanded throughout the 20th century in former British colonies, as we will see below.

Where is Cricket Popular?

However, despite its popularity in all corners of the world where the British Empire formerly reigned, it is in India in particular where cricket has transcended sport to become a way of life.

Matches in India are regularly followed by tens (or hundreds) of millions of people on TV and online, and the Indian Premier League now attracts the best and highest-paid players in the world.

Why is Cricket Called ‘Cricket’?

The origin of the name ‘cricket’ is disputed. It has been suggested that it comes from the Middle Dutch phrase for hockey – ‘met de (krik ket) sen’ – or from the Old English word ‘cricc’, which means crutch or staff and could refer to the modern-day bat.

There are also claims that ‘cricket’ comes from the Old French ‘criquet’, meaning club or stick.

All of these explanations point to the sport first being played in either England or Flanders, but its origins are not as easy to pinpoint as those of other sports.

Why is Cricket Called a ‘Gentleman’s Game’?

Cricket is called a ‘Gentleman’s Game’ because during its growth in popularity it was played by both ‘players’ from the working classes and ‘gentlemen’ from the upper classes. The players were employed by clubs and earned a living while the gentlemen supposedly played only for expenses as amateurs.

A Gentlemen v Players match between select teams from both groups began in the early 19th century and actually continued until 1962, when the Marylebone Cricket Club, which drew up the rules of the sport, abolished the amateur status of cricketers.

Today, cricket is still known as a ‘gentleman’s sport’ – despite a huge increase in the number of women playing the game – because it is played in the ‘Spirit of Cricket’, which encourages adherence to the laws of the game and to fair play.