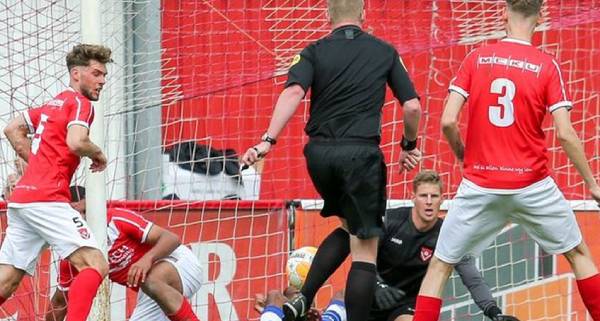 Some things in football (soccer), no matter how often they happen, are simply never not funny. A player taking one for the team square in the private parts. Phil Jones’ facial expressions while trying to look competent. Mascots standing alongside players for minute’s silences.

When Has a Referee Ever Scored a Goal?

Even the question of ‘Has a referee ever accidentally scored a goal?’ seems bizarre and almost futile. Of course they shouldn’t have. They’re referees, after all.

And yet – there are quite a few examples, in fact, of the ref getting on the scoresheet. In September 2001, Brian Savill was refereeing a Great Bromley Cup tie between Earls Colne and Wimpole 2000 and volley the ball into the back of the net to score for Wimpole.

It didn’t do much good – they lost 20-2, and Savill resigned the following January after being told he would be suspended by the Football Association.

Meanwhile, in May 2019, referee Maurice Paarhuis scored for HSV Hoek to make it 3-2 in their 4-2 defeat at Harkemase Boys in the Dutch fourth tier.

A goalmouth scramble resulted in the ball cannoning off the helpless official and across the Hoek line – fortunately, it would not cost them victory.

And back in 1986, disaster struck referee Ahmet Akçay when he found himself in the way of a late MKE Ankaragücü shot in their Turkish league clash with Besiktas. He turned it home, the goal stood, and Ankaragücü won 1-0.

“This is the first time in my 17 years in football that I’ve scored a goal,” Akçay told the Milliyet newspaper later. “My conscience is clear.”

Whether he felt the same way at the end of the season is another matter – Besiktas finished a point behind champions Galatasaray with a superior goal difference.

And before even then, referee José de Assis Aragão got on the scoresheet in a 1983 clash between Brazilian sides Santos and Palmeiras.

With Santos 2-1 ahead in the second minute of added time, another skirmish ensued, and the last touch accidentally came off Aragão and into the Santos goal.

In the cases of Paarhuis, Akçay and Aragão, each of them were, by the letter of the law, correct to allow the goals they scored to stand. Until a rule change in June 2019, the rules stated:

“The ball is in play at all other times, including when it rebounds off a match official, goalpost, crossbar or corner flagpost and remains in the field of play.”

Laws of the Game

Essentially, the referee was seen as part of the field of play, rather than some sort of foreign object intruding on proceedings. So, technically, a goal deflected in by a referee was, at the time, permissible.

That all changed in June 2019; coincidentally the week after Paarhuis broke his goal duck. Now, the rules are as follows:

“The ball is out of play when it touches a match official, remains on the field of play and:

A) A team starts a promising attack, or

B) The ball goes directly into the goal, or

C) The team in possession of the ball changes.”

What Happens If a Referee Touches the Ball Now?

Under the new rules, if a referee directly interferes with play, he or she must stop the game and restart it with a dropped ball.

As such, humorous as they were, it looks like the goalscoring days are over for the men in black.