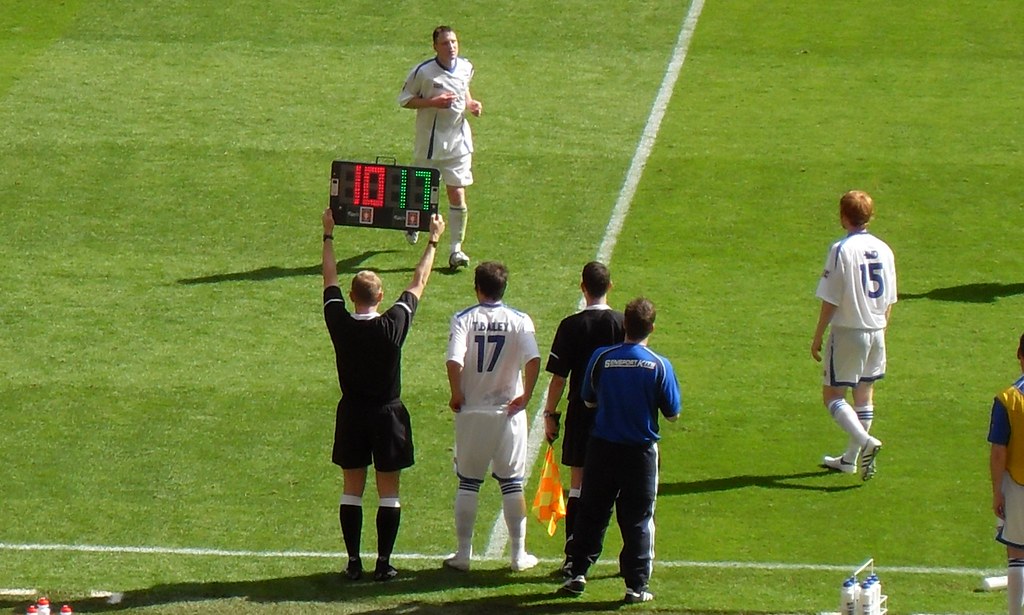 They rarely seem to do much during a match other than stand dressed all in black, hold a big electronic board, and look deadly serious at all times.

So, in football, exactly what is the fourth official’s job? How powerful are they? And do we desperately need them in the game?

You can draw your own conclusions to this as we explore the life of a fourth official in greater detail below:

What’s a Fourth Official In Football?

According to the guidelines provided by the Football Association (FA, the fourth official ‘assists the referee and assistant referees at all times. This will involve being pro-active in any dealings with players, substitutes and club officials, especially during the match’.

A fourth official is often also a referee and can take the place of any of three match officials (referee, two assistants) if they cannot continue for whatever reason.

In ‘normal’ circumstances, they will be appointed to certain matches by the FA, but there have been certain exceptions. During the coronavirus pandemic, for instance, we have seen coaches of Premier League teams take up the role, while in a friendly between Grimsby Town and Wigan Athletic in July 2017, a policewoman helped carry out a substitution after the fourth official was injured.

What Does the Fourth Official Do?

Let’s split this up into three sub-headings: here’s what the fourth official’s role entails before, during and after the match, as written up by those same FA guidelines:

When Was the Fourth Official Introduced in Football?

The International Football Association Board (IFAB) introduced the fourth official into football in 1991, primarily as a replacement for any of the match officials if one of them could not continue.

Though, right from the start their role also entailed overseeing substitutions, maintaining order in both technical areas, assisting the referee on any incidents he did not clearly see, and keeping a record of cards and goals.

Can the Fourth Official Make Decisions?

They can’t really go so far as making their own decisions, but the referee can seek assistance from the fourth official if he/she and the two assistants have missed a potentially match-changing incident (e.g. possible yellow or red cards and penalties).

The fourth official must also tell the referee when the wrong player has been booked or sent off through mistaken identity, or when a player is not sent off despite being given a second yellow.

What Equipment Does the Fourth Official Need?

There are two pieces of equipment most fourth officials rely upon. Firstly, the electronic board, used for indicating to those in the stadium who is being substituted on and off and how much injury time the referee has allocated.

In addition, some fourth officials also use a PTT headset during games. They stay in ‘listening mode’ for much of the match to not disturb the referee and two assistants – who will be in dialogue with each other throughout the game – with the noises from the touchline. The fourth official can also step in and join the conversation if his/her help is needed.

Where Does the Fourth Official Stand?

The fourth official will be found hovering somewhere between both teams’ technical areas so as to enable him/her to keep proceedings under control.

When indicating how much injury time or a substitution being made, they will stand roughly in line with the halfway line on the pitch while raising the board above their head to make whatever is happening clear for all to see.

How Much Do Fourth Officials Get Paid?

Match officials are usually paid on a game-by-game basis as well as their basic salary, so it obviously varies somewhat on the size of the match in question.

For instance, in England, The Athletic reported that Premier League referees earn a basic salary of about £70,000, with match fees of £1,000 added to that, including when they act as fourth official. That means that, over a year, they could easily earn a six-figure sum.

Further down the pyramid, it is not so lucrative. An assistant referee deputising as fourth official in a match in League One or Two would earn £130, while a referee doing so would earn £450 per game.

And in as recently as 2015, fourth officials in the National League would earn as little as £110 per match, according to the Daily Mail.