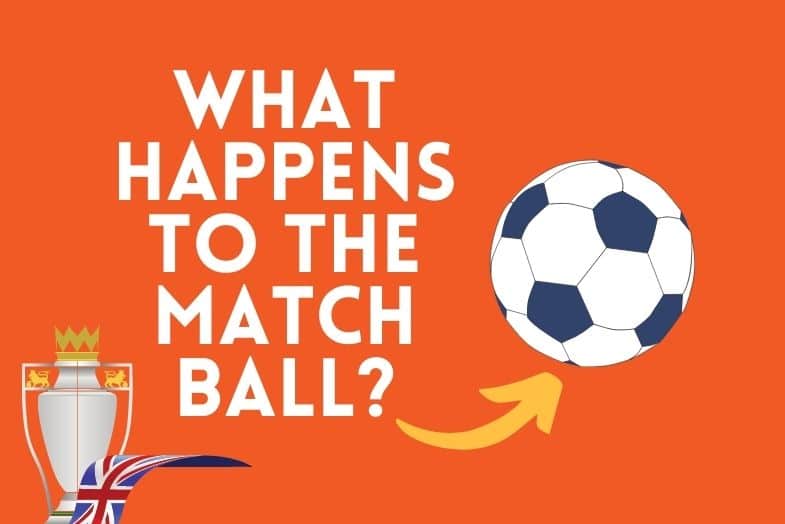 As one of the most important pieces of equipment in the sporting world, a football symbolises arguably the most viewed and most popular sport across the globe.

From amateur leagues to the World Cup final, a football match cannot begin or end without the ball, with many football designs being remembered throughout history for their nostalgia and importance in the history of the sport.

But when the final whistle is blown after the 90 minutes of a football match, what happens to this essential piece of equipment?

Join us as we go through what happens to a football in professional clubs and why some players can keep the ball after important moments.

Do Match Balls Get Reused in the Premier League?

As Premier League clubs have adapted to placing several match balls around the pitch during a game, the match balls are often re-used for several fixtures as long as the quality of the ball is kept intact.

The balls are often provided by the EPL with each club receiving a large amount to use for matchdays in case of any damages or punctures to the balls.

An average of 16 match balls are used per EPL fixture with clubs often placing as many as 20 balls around the stadium. Ball boys are located around the pitch to quickly throw and retrieve the balls for the players, this enables play to flow quicker and save time in retrieving the ball from the crowd.

What Happens to Footballs After a Game?

Once a game has finished, the match ball can be taken off the pitch by either a player who has scored a hat-trick or, more commonly, the referee.

In most cases, the referee and his team of officials will take the match ball back into the referee changing room to be stored for future fixtures at the same stadium.

The match ball could also be donated to charity through either the football club or the footballing governing body. Several charities are funded mainly through this method of donation with charities Alive and Kicking, Charity Ball and Ball to All benefiting from these donations.

Does the Man of the Match Keep the Ball?

In the Premier League, the man of the match (MOTM) receives a small trophy that changes colour every year. The player receiving this award generally has either a great number of assists, goals, or saves that have made a significant impact on the match.

Why do Players Keep the Ball After a Hat-Trick?

Traditionally, players who score three goals during a match will keep the ball as a memento for the achievement of a hat-trick – something very few players manage to do in a game.

There are no official rules in the Laws of the Game regarding a player keeping the ball after scoring a hat-trick, however, it is a tradition that has been kept in the sport since the 1850s.

Ultimately the decision comes down to the referee as he can decide to keep the ball from the player and store it for a future fixture. Generally, players are given permission to go home with the match ball as it is seen as a great achievement.

The term hat-trick was first used by English cricket player H.H. Stephenson who took three wickets in three consecutive deliveries during a game between an all-England team and Hallam. After the game, a financial collection was held afterward for Stephenson with the money being collected and given to him inside of a hat.

This feat of hitting three wickets was labeled as a hat-trick by the cricket community and adopted by the footballing community a year later, the only difference being that a player would score three goals rather than taking three wickets.