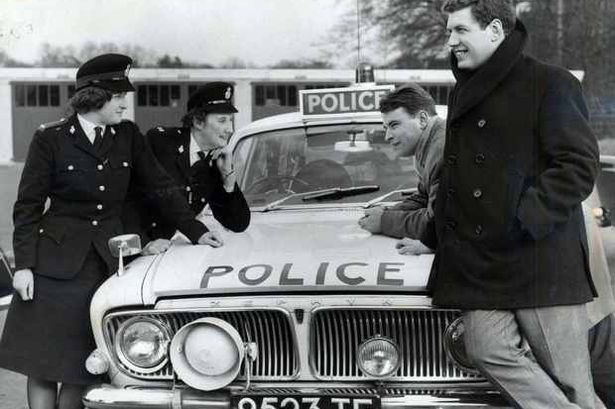 You’ve seen it happen at almost every home game you’ve ever been to that’s it practically part of the match day routine.

As your heroes make their way onto the hallowed turf before entering into battle, the same music will always signal their arrival.

But what is the reason for these English clubs choosing their pre-match music?

Now preceded by a stirring air raid siren as used by boxer and Evertonian Tony Bellew in his fights, ‘Z-Cars’ has been on repeat at Goodison Park since 1962.

Based on ‘Johnny Todd’, a traditional folk song, ‘Z-Cars’ was theme tune to the BBC television of the same name, which lasted from 1962 until 1978, and was based in Newtown, a fictitious place near Liverpool.

The story goes that Terence Edmond, who played PC Ian Sweet in the show, was an Evertonian, and one day brought some of his fellow cast members to watch the Blues. To honour them, the players entered the pitch that day to the sound of their own theme tune.

Everton don’t use the original version nowadays, which was played mainly on flute, and instead adopt a punchier rendition that has since been recorded.

Though there have been occasional variations, including in the 1994-95 season, when the tune was momentarily replaced by the theme tune to ‘2001: A Space Odyssey’ and Creedence Clearwater Revival’s ‘Bad Moon Rising’.

Across Stanley Park, one of football’s most iconic and renowned anthems continues to air before Liverpool kick off at Anfield.

Though ‘You’ll Never Walk Alone’ was originally written for the musical ‘Carousel’ in 1945, the Reds adopted a cover of the song by Liverpudlian band Gerry and the Pacemakers shortly after it became a chart-topping success in 1963.

So ingrained into the club’s identity is the song that its title is inscribed on the gates outside Anfield, which stemmed from the band’s lead singer, Gerry Marsden, meeting then-Reds manager, Bill Shankly.

Marsden, a Liverpool fan himself, supposedly presented a copy of the song to Shankly during a pre-season trip, which left the boss ‘in awe of what he heard’, according to defender Tommy Smith.

And though it is also adopted by other European giants, such as Celtic and Borussia Dortmund, the song will never be quite as synonymous with another club as it is with Liverpool.

Elsewhere in the North West, Manchester City’s own answer to ‘YNWA’ or ‘Z-Cars’ is comparatively more recent, albeit from an ever older song.

‘Blue Moon’ was originally written by Richard Rodgers and Lorenz Hart in 1934, and has been covered repeatedly by musical icons such as Frank Sinatra, Elvis Presley and the Marcels, whose doo-wop version Rodgers was said to have hated so much he submitted newspaper adverts urging people not to buy it.

It is believed that City did not adopt the song until the opening game of the 1989-90 season against Liverpool, having initially been associated with supporters of Crewe Alexandra.

But a more rousing, anthemic version which sees arms raised and scarves held aloft is now a mainstay on the pre-match playlist at the Etihad Stadium.

There are records of Hammers fans singing their signature song since the 1940s, though it is possible that its association could stem even further back.

‘I’m Forever Blowing Bubbles’ was originally written in America 1918 by John Kellette, and first appeared in the Broadway musical ‘The Passing Show of 1918’, before crossing the Atlantic Ocean in the 1920s, when it became a popular tune in British music halls.

It is not entirely clear how the East London club came to claim it as their own, with a number of theories having been constructed.

The first is that a Hammers youngster, William Murray, was nicknames ‘Bubbles’ due to his resemblance to a boy in an 1886 painting by Sir John Everett Millais called ‘Bubbles’, which was used to advertise Pears’ Soap.

Then, during a schools game at their former home, the Boleyn Ground, Murray’s headmaster, Cornelius Beal began singing the song, and others soon followed, thus beginning West Ham’s affiliation with ‘Bubbles’.

Another story is that West Ham fans adopted the song having heard Swansea City supporters sing it during a 1922 FA Cup tie between the two clubs; of this, there is concrete evidence.

But the first record of West Ham using the tune was in 1940, when they beat Blackburn in the Football League War Cup Final at Wembley. The song was used in air raid shelters and underground stations during the Blitz, so this seems a more plausible explanation for its origin.

A Tom Jones song about murdering a woman doesn’t exactly seem as natural a fit for a stirring football anthem as ‘YNWA’ or ‘Blue Moon’, for example, but at Stoke City, ‘Delilah’ has been sung by the club’s supporters since the late 1980s.

One theory is that Potters fan Anton Booth started the association before a game at Derby in April 1987. Supporters in a pub were asked by police to stop singing explicit songs, so Anton – now known as TJ through his affiliation with the tune – climbed onto a table and sang it.

Another explanation for Stoke’s re-worded version is that supposedly came about because of how bad the team were performing; hence the lyrics “So before they come open the doors forgive us Stoke City we just couldn’t take any more. Oh, why, why, why, do we bother?”

For some time, the song was taken off the pre-match setlist, and in 2014, the club’s supporters had to defend their right to sing it because of the crude connotations of their own rendition.

But it returned in August 2017 before the Potters secured their first win of the season over Arsenal. They were relegated the following May, though, so swings and roundabouts…