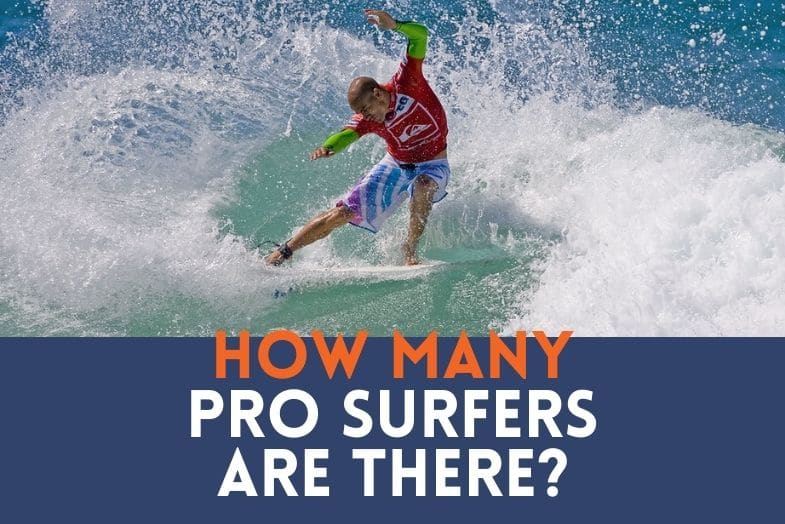 If you have ever surfed, I can guarantee you have also daydreamed about becoming a professional surfer. Travelling the world, competing in exotic locations, free merchandise and getting paid to surf – sounds perfect, right?  But is it all sandy beaches, big waves and pots of prize money? Is there a salary to be made from surfing? How many surfers are considered ‘professional’ and how do you become one? Let’s find out below.

How Do You Become A Pro Surfer?

If you want to surf with the pros – you have got to get into competing. Each year the World Surfing League runs the World Qualifying Series (WQS). Members registered with the WSL enter local events across seven global regions: Africa, Asia, Australia/Oceania, Europe, Hawaii/Tahiti, North America and South America. The competitors who obtain the highest scores at the WQS qualify for the Global Challenger series.

The WCT is the ultimate surfing competition. If you qualify, you will find yourself up against world renowned surfers like Kelly Slater, Coco Ho and Filipe Toledo – the best of the best. It is at the WCT held in some of the best surfing locations worldwide, you will surf for your shot at the World Title.

How Many Professional Surfers Are There?

There are an estimated 1500 to 2000 professional surfers in the world, but only 34 men and 17 women are invited to compete in the World Championship Tour (WCT) each year, made up from a mixture of seasoned pros, new talent and wildcard entries.

Surfing is fast gaining popularity with over 35 million people in the world calling themselves a surfer and the idea of being considered a ‘professional surfer’ has only been around since the 1980s. Around 1500 to 2000 are considered professional surfers and out of this figure, only 34 men and 17 women are invited to compete in the WCT each year. This is mix of seasoned pros, new talent and wildcard entries.

Where Are Most Professional Surfers From?

How Do Surfers Make Money?

A professional surfer’s income is a result of prize money, sponsorships, product endorsements and social media.

Competition prizes can sometimes make up the smallest fraction of the money pro surfers make, with competition winnings dwindling fast after the top 5 contestants. Not to mention, competitive surfing is expensive. Once you subtract entrance fees, flight costs, accommodation costs, equipment and food, there may not be a lot left over to top up your bank account.

Sponsorships are a great opportunity for professional surfers to make money, with brands such as Vans, Redbull, Ripcurl and Billabong sponsoring some of the biggest pro surfers on the scene. A benefit of a sponsorship deal is that the company will pay for competition entry fees, accommodation, travel and equipment, greatly reducing the cost of competing.

However, becoming a sponsored athlete is equally as competitive as the surfing competitions themselves, and being a great surfer is not necessarily a guarantee to securing a contract. Brands also look for qualities such as physical appearance, healthy lifestyle, interpersonal skills and your presence on social networks. You are representing the brand; they need to know that their investment in you will sell their products and not damage their reputation.

How Much Does a Pro Surfer Make a Year?

Kelly Slater is the highest earning professional surfer with a net worth of $22 million, the majority of which comes from his long-time association with Quiksilver. Followed by John John Florence whose net worth is $12 million and Laird Hamilton at $10 million.

So, if you’re not wiped out after all those wipeouts and still fancy yourself as the next surfer to take the World Title – there is big money to be made from surfing if you know where to look… you just might have to go up against some true surfing legends to get to it.