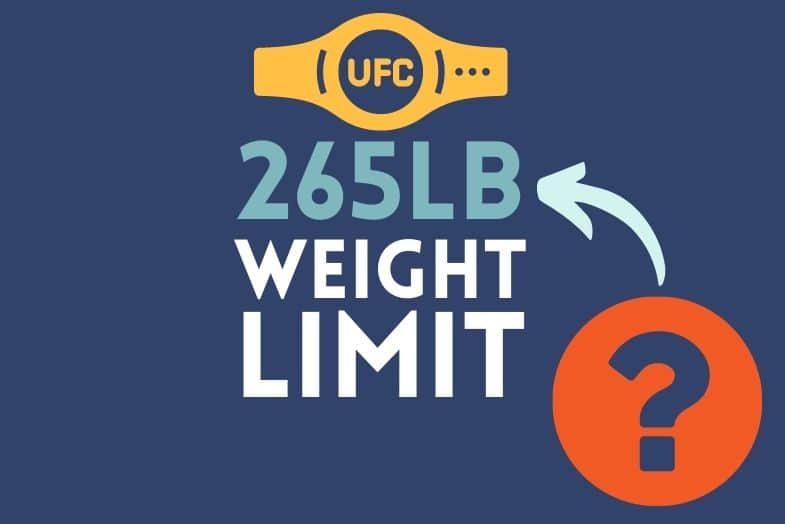 After being introduced in 1997, weight divisions have enabled UFC to expand into one of the most competitive and entertaining MMA promotions in the world.

With twelve weight divisions split across the promotion, UFC’s heaviest and arguably most entertaining is the men’s heavyweights – a division for male fighters who weigh between 205lbs-265lbs.

The UFC are extremely consistent in their demand for fighters who face each other to be in the same class, making it mandatory for them to weigh in before a fight so they do not exceed the maximum weight allowed.

But why is there a maximum weight for the heavyweight division? And could the UFC introduce a new category for men who weigh over 265lbs?

Does UFC Heavyweight Have a Weight Limit?

The maximum weight allowance of an MMA/UFC heavyweight fighter is 265lbs with the division’s weight limits set at 206lbs-265lbs. This heavyweight upper limit is set and defined by the Nevada State Athletic Commission.

Weight categories are also highlighted under the Unified Rules of Mixed Martial Arts, which was proposed and agreed upon by various athletic commissions in the 2000s.

The UFC would eventually adopt these rulings alongside the weight limits for fighter divisions, however, they can create their own unique rules provided they stick with the core rules of the athletic commission rules.

There are twelve weight divisions in the UFC with the promotion maintaining the divisions through weigh-ins for fighters before their fights. If a fighter is over the weight limit, the opponent holds the right to refuse to fight or instead take a higher percentage of their opponent’s pay after the fight.

Why Does the UFC Heavyweight Division Have a Limit?

Fighters who are within the same weight category add further interest to the UFC’s status as a legitimate fighting sport as the fighters must win through their skill and power rather than an obvious advantage such as a greater weight.

Why Doesn’t UFC Have a Super Heavyweight Division?

Although they can create their own, the UFC does not yet have a Super Heavyweight division because there is not a big enough talent pool to make up the division as competitive as the other 12 divisions.

With greater weight, fighters are often less agile and unable to compete for long periods which the UFC fights demand. This lack of skill and speed lowers the legitimacy of professional fights and instead presents them in the same image as a bar brawl – with the UFC focused on the legitimate image of their promotion, a lower quality fight would not have the same appeal compared to the light heavyweight and heavyweight divisions.

With a Super Heavyweight division most likely requiring fighters to range between 280lbs-300lbs, fighters would be built closer to that of a sumo wrestler who are on average 330lbs.

The health of fighters is also an important factor to consider when looking at a Super Heavyweight division, with the average life expectancy of a 300lb man being 60 years of age. This is 20 years less than the average man in 2021, highlighting the risk for fighter’s health if they were to make the jump up to this increased body weight.

Will UFC Ever Add a Super Heavyweight Division?

It is unlikely that the UFC will introduce a Super Heavyweight division soon as they will be unable to build the same legitimacy and quality fights that the lower weight divisions have built since the promotion was created.

A smaller talent pool for skilled fighters weighing over 265lbs means that the UFC would struggle to build the same anticipation and viewer interest for the Super Heavyweight division fights, potentially causing them to receive less revenue than a heavyweight fight would gain them.

As the UFC would only be able to build a division with a small selection of super heavyweight fighters, the division’s title would likely switch between two or three fighters at most, further lowering the fan excitement for this new division.

Despite these issues, it is not impossible for the UFC to add a Super Heavyweight division with MMA having several notable fighters in the past within the ‘super’ weight category.

If UFC were able to find more fighters with Lesnar’s combined skillset and weight, a Super Heavyweight division could be a very popular division for the promotion and its fans.