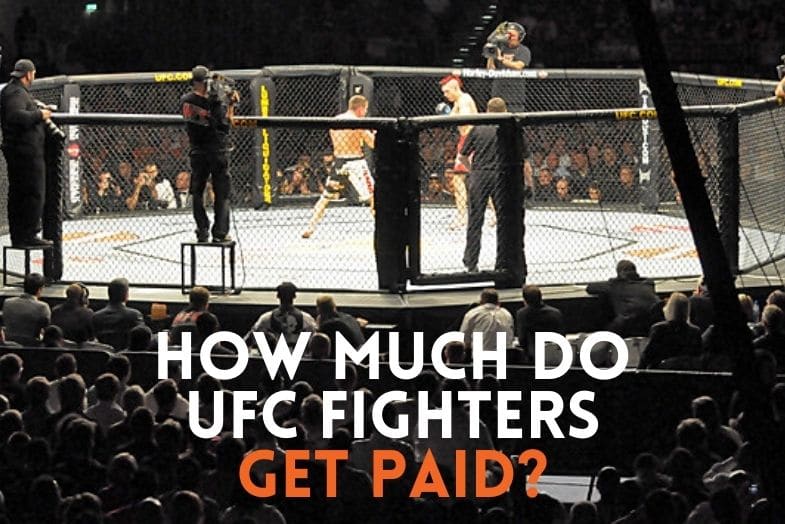 As one of the world’s fastest growing sports, Mixed Martial Arts and, in particular the Ultimate Fighting Championship, have propelled martial artists of all demographics and styles into the forefront of stardom. Worth an estimated $5 billion (as of 2021), UFC has promoted full-contact sporting events since the Las Vegas-based company was formed in 1993.

Mixed Martial Arts as a general sporting term has evolved over the years (most notably since PPV), and UFC as a brand has attracted sponsorship deals with some of America’s top exports. From ESPN, Bud Light, to Harley Davidson and Burger King, UFC is a powerhouse of an earner, and this prompts the question: How much do UFC fighters actually earn?

How Do UFC Fighters Get Paid?

Initially, fighters sign a contract with UFC for (X) number of fights and are paid each time they make their target weight and enter the octagon. If they win, fighters receive a bonus, yet, even if they lose, fighters also get an uplift payment. Like other contact sports, contract value fluctuates depending on a fighter’s popularity and success.

Do UFC Fighters Get a Salary?

Like many other sports, UFC fighters’ contracted salaries depend on a number of mitigating factors, both inside and outside of the octagon. Unsurprisingly, the amount of public interest in the fighter has a big impact on their potential earnings. Moreover, whilst male fighters earn more than their female counterparts, the growing appeal of UFC is ‘peppering’ the pot a bit for all fighters.

How Much Do UFC Fighters Get Paid Per Fight?

Whilst top-tier earners like McGregor and Nurmagomedov command high fees for their participation, there is what could be deemed a “pay scale”. On one end, Khabib Nurmagomedov was UFC’s highest earner in 2020, raking in £4,653,069. Whilst on the other end, Cole Williams bagged a meagre £7,258 for his 2020 bout versus Jason Witt.

So, much like Boxers, Footballers and Jockeys, you’re paid your worth!

Each fighter is considered an independent contractor, and as such, are free to renegotiate the terms of their contract should they prove box-office material. The structure of an MMA fighters’ purse is set up in such a way to incentivise big bouts, heavy blood and picture-worthy knockouts/submissions.

However, there are three main levels which determine a fighter’s pay.

As above, there are many determining facets for how a UFC fighter is paid; the three main  payment levels depend on a fighter’s status.

This can be further exemplified by Nate Diaz’s base salary of £13,347 for his 2015 bout with Michael Johnson. However, after Diaz choked out McGregor a year later, he was able to renegotiate his base salary for his next fight to the tune of £174,544.

The MMA Manifesto estimates that the average salary of a UFC fighter in 2020 was £113,052. Still a high figure, the swathe of pay structure(s) within UFC that a fighter can earn is variable – and a fighter’s purse is more-or-less, within the fighter’s own hands (pun intended).

How Much Do UFC Champions Make?

Much like boxing and other contact sports, UFC has weight classes. But back in 1993, MMA was not sanctioned in America, and MMA has since divided fighters into different weight classes. The longest serving male champion of UFC is Brazilian/American middleweight Anderson Silva – who cranked up 16 consecutive wins within his 2,457 day reign. Anderson’s total UFC fight earnings (all converted by the 2021 USD/GBP exchange rate) is a face-smacking £6,268,914!

However, women’s bantam and featherweight champion Amanda Nunes has held her bantamweight title for 1,783 days and has earned an estimated £2,656,319 in her career. Nunes’ highest take-home pay was for her 2019 showdown with Holly Holm which saw her pocket a thigh-slapping £472,121.

Considering Nunes won by TKO at the 4:10 mark of the first round, the Brazillian earned £1,919 per second for her win over former champion Holm.

One of the burning questions within UFC is whether or not fighters are underpaid. Considering that the chasm of average earnings between boxers and UFC fighters is slowly closing, it is safe to say that UFC is on the rise within mainstream sport and may someday equalise.

Yet, as boxing is largely seen as the more dangerous of the two sports – with 1,876 boxing related deaths between 1890-2019 (also, see Chronic Traumatic Encephalopathy) – UFC does have some catching up to do with relation to historical legacy.

Adding in bonuses (backroom or otherwise), sponsorship deals, PPV points, fines, product placement (see Proper No. Twelve), endorsements and media work; statistics suggest that UFC fighters may one day see purses that could proportionately match the earnings of boxer Floyd Mayweather. Despite the complexities of UFC pay, in Britain, there are more and more MMA fighters registering to take part in one of the world’s bloodiest sports.

(N.B: All cash sums cited have either been converted for yearly/monthly exchange rates or approximated by sources and therefore may not entirely represent actual earnings).