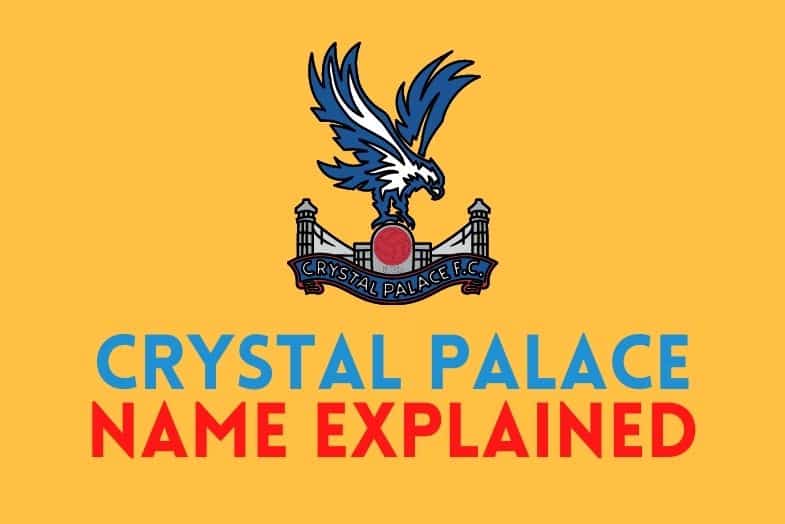 It’s pretty obvious from their names where most football clubs are based. Manchester has a United and a City, Nottingham has a Forest and a County.

But what about those clubs that don’t take their name from a specific place? What about Arsenal, or Port Vale? Or even Celtic and Rangers in Scotland? Crystal Palace is a club with an unusual name and a long history in the English game. Does it fall into the category of not being named after a place?

The connection makes the Eagles the oldest league club in existence still playing professional football, and they were also founder members of both the Football Association and FA Cup.

Is Crystal Palace a Place?

Crystal Palace is a place; it is an area in south London named after the Crystal Palace Exhibition building, which stood in the area from 1854 until it was destroyed by a fire in 1936.

How Did Crystal Palace FC Get Its Name?

The company had been lobbied by existing members of the cricket club to provide a continuation of sporting activities during the winter months, which led it to form the amateur Crystal Palace Football Club in 1861.

All of the football club’s management committee and most of its original players were previously members of the cricket club, and they shared the same pitch within the Crystal Palace Park

Why Are Crystal Palace and Brighton Rivals?

Brighton and Crystal Palace have been rivals since the 1976/77 season, with the rivalry said to stem from a personal feud between the clubs’ respective managers Alan Mullery and Terry Venables that dated back to their time playing together at Tottenham Hotspur a decade earlier.

However, there was also a rivalry on the pitch that season, with both clubs expected to earn promotion from what was the old English Third Division, known today as League One.

A war of words ensued between the managers, but a relatively uneventful 1-1 draw in the league was followed by three matches between the teams in the FA Cup, when the rivalry cranked up notch, largely because of the managers’ post-match comments.

A second replay – required after stalemates in the first two matches – was held at the neutral Stamford Bridge, home of Chelsea, and finished 1-0 to Palace, but only after referee Ron Challis ordered a penalty scored by Brighton to be retaken for apparent encroachment.

The retake was subsequently missed, the Seagulls were defeated, manager Mullery fined after an altercation with Palace fans while leaving the pitch, and a rivalry was born.

In a quirk of fate befitting the strange world of football, Mullery later spent two seasons as Palace manager in the early 1980s, an appointment that was greeted with fury and a short-lived boycott by the club’s fans.