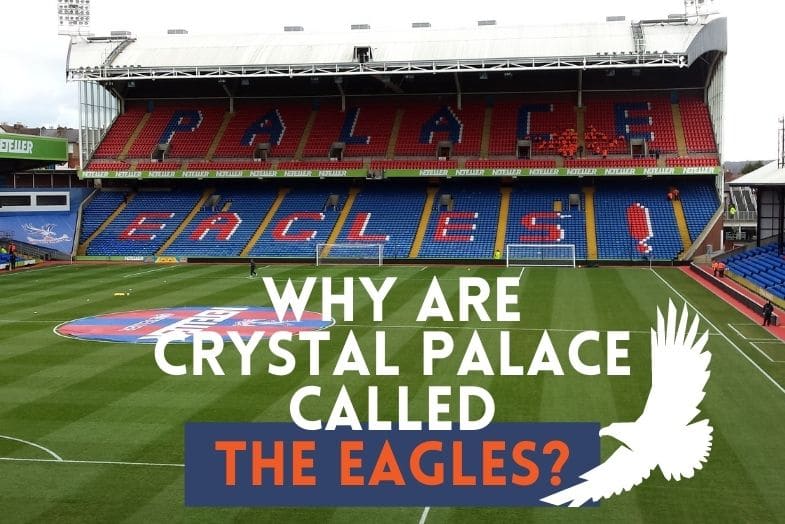 It’s commonplace to associate the iconic red and blue stripes with Crystal Palace, but as is the case with many a Premier League side, the London-based club’s nickname is one with a unique story and significant meaning. Nicknames are more than just quirky monikers; they denote part of each cub’s rich history.

Ever wondered why Man City are called “The Citizens,” Sheffield Wednesday are known as “Wednesday” or “the Owls, or perhaps the most iconic; why England is “The Three Lions?” Understanding why Crystal Palace have been dubbed “The Eagles” and “The Glaziers” is the newest installment in SQaF’s series in examining nicknames of famous clubs.

What Are Crystal Palace’s Nicknames?

Becoming a professional club in 1905, Crystal Palace, which is based in the London Borough of Croydon and can claim a link to the Crystal Palace football team 1861, has two main nicknames for which they are known: “The Glaziers” and “The Eagles.” And while supporters are well-versed in their club’s history, most are unaware of the names’ origins.

Why Are Crystal Palace Called “The Glaziers”?

“The Glaziers” nickname is a reference to the club’s association with the famous glass palace it is named after. A “glazier” meaning “a person whose trade is fitting glass into windows and doors”.

In the club’s infancy, local papers referred to the team as “The Crystals,” but it took only five years before the nickname “The Glaziers” was born.

The Great Exhibition of “Crystal Palace” was originally built in London in 1851, and it was here that Crystal Palace Football Club was incepted in 1905. The nickname of “The Glaziers” started being used to refer to the club around 1910.

Why Are Crystal Palace Called “The Eagles”?

Crystal Palace started using the nickname “The Eagles” at the behest of their new high-profile manager, Malcolm Allison, in 1973. Allison looked to revolutionise the club and adopted the nickname from Portuguese side, Benfica, who were one of the most successful teams in Europe at the time.

Up until this point, Palace had mostly commonly be known as “The Glaziers”, but the new “Eagles” nickname quickly began to dominate.

With the Lisbon-based outfit being “The Eagles,” Allison clearly was motivated by the club’s immense success, which he hoped to emulate in his new position at Crystal Palace. Despite a change in nicknames throughout the club’s existence, both are represented on the team’s current badge, which sports an eagle perched on top of the glass palace.

Do Crystal Palace Still Have an Eagle at Selhurst Park?

From 2010 until 2020, Crystal Palace adopted an actual eagle (known as ‘Kayla’) as the club’s mascot. Before matches, Kayla would wow fans by flying from one end of the pitch to the other shortly before matches at the club’s Selhurst Park stadium.

After being stolen from her nest and mistreated, Kayla, an American Bald Eagle, was brought to the U.K. and rehabilitated at Eagle Heights Wildlife Foundation. After making an impression at Selhurst Park, Kayla initially was an ambassador and would appear in flying exhibitions before becoming the club’s official mascot in 2015.
She tragically passed away from an illness in 2020 and was immensely loved by all those involved with the club. After Kayla’s passing, Selhurst Park currently does not have an eagle at the stadium grounds.