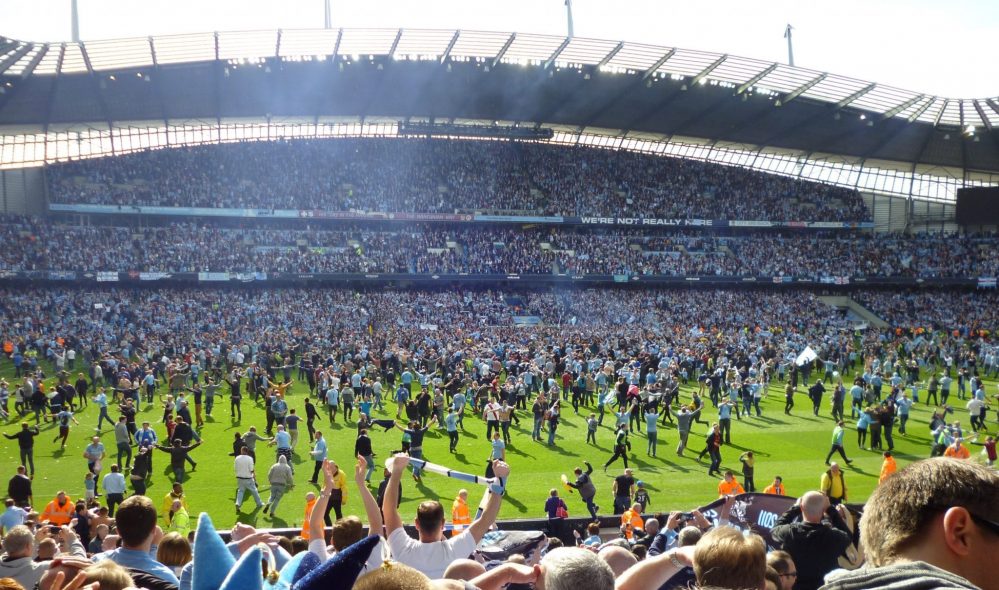 We’ve looked previously at why Newcastle go by the ‘Magpies’ and ‘the Toon’, why Southampton are called ‘Saints’, and why England are known as the ‘Three Lions’, among many more nickname explanations.

So, let’s now look at how where the Premier League champions get their ‘other’ tags from. What do Manchester City fans call themselves? What’s the meaning behind ‘Berties,’ a term often used to describe them by their neighbours, Manchester United fans? What is the origin of ‘Citeh’? And where does that ‘We’re Not Really Here’ song stem from?

Why Are Manchester City Nicknamed “The Citizens”?

Manchester City’s “The Citizens” is simply an adaptation of their “City” name. However, it does also imply that Manchester City fans are citizens of Manchester, which could be considered a snipe at Manchester United, who have many non-local fans.

Though not strictly an ‘official’ nickname, you may occasionally hear Man City or their fans be referred to as ‘Citizens’ or ‘Cityzens’. Put simply, these names have simply evolved from their team name, ‘City.’

If you join Man City’s official free membership, you become a ‘Cityzen’, while during the COVID-19 pandemic, the club launched ‘Cityzens At Home‘, an online resource allowing fans to remain close to the club while during lockdown (including football coaching videos, mindfulness classes, culinary challenges and much more).

What Other Nicknames Do Manchester City Have?

Manchester City are also known by some fairly predictable other names like ‘City’ or the ‘Sky Blues’ – given that is, of course, Man City’s primary colour).

Left-back Benjamin Mendy also coined the term ‘Shark Team’ during City’s 18-game winning streak en route to winning the Premier League with 100 points in 2017-18, with fans and players wearing t-shirts with the nickname prior to their 7-2 demolition of Stoke City in October 2017.

You may also have heard them be referred to as ‘Citeh’ – well, let’s get onto that…

What Does ‘Citeh’ Mean?

‘Citeh’ is often used to describe Man City, but with a more phonetic spelling based on how Mancunians pronounce ‘City’.

In much the same way, you sometimes get people referring to Manchester United as ‘Yanited’ or ‘Yernited’.

Why Do Man City Fans Sing ‘We’re Not Really Here’?

First of all, if you’re not familiar with the chant that City supporters have sung for more than 20 years, here’s how it goes (to the tune of ‘We Shall Not Be Moved’):

“We are not, we’re not really here,

“We are not, we’re not really here,

“Just like the fans of the Invisible man, we’re not really here.”

What’s the story behind it? Well, there are numerous schools of thought on this.

Some believe it stemmed from a particularly fervent among fans in a Dublin bar when City were in Ireland for a tour in the mid-90s, while others say it was a chant borne out of self-deprecating gallows humour following City’s relegation to Division Two in 1998.

Another slightly less plausible theory is that it began at an away game at Millwall by City fans who found their way round a ban on away fans attending the Den, while what feels the most likely origin is that it was adopted by City fans in the mid-90s having started as a pub song in tribute to a man who had sadly passed away in tragic circumstances.

Indeed, City fan and author Don Price writes in his book ‘We Never Win At Home, We Never Win Away: The Inside Story of Manchester City’s Legendary Fans’ (as quoted by Manchester Evening News): “First of all, it started as a pub song not a football song and was not started at a game.

“However, it did turn out to be a sentimental song to us in Prestwich when it was first sung.

“In the early 90s, a group of us from Prestwich went on a stag do to Amsterdam and while we were there, we got word that a great mate of ours who, for one reason or another had not come with us, had committed suicide.

“Unsurprisingly, it knocked the stuffing out of us, and to be honest, we were glad to be going home the next day, as it was impossible to enjoy ourselves knowing something as tragic as that had happened to one of our mates.

“The weekend after we got back, we all met up in the Forester’s pub in Prestwich, on one hand to carry on the stag do, and also to have a drink to our mate.

“Half way through the afternoon one of the lads, Phill (RIP), called everyone to silence and we assumed he wanted to make a speech but instead he stood on a chair and came out with these iconic words:

“If you drink, you will die, if you don’t drink you will die, so it’s better to be drunk than be sober when you die. Just like the fan of the invisible man, We’re not really here.

“Now, I never knew what inspired Phill to come out with those words, but to us that were there, they seemed the right thing to say and the right time to say them, as the song was in memory of our mate.

“Looking back now, it was an emotional experience. The pub was packed and everyone joined in with the singing. As it happens, the lad who died although it does not matter, was not a City fan and neither was Phill.

“I am sorry if this disappoints people who thought it had some other nostalgic reason connected with the club but I cannot rewrite history.

“To be honest, though, I think it only really took off because we were relegated and playing in the lower divisions, as in truth it had more meaning singing it at the likes of Grimsby, Lincoln and Swindon than it would at Arsenal, Liverpool or Chelsea.”

Whatever its origin, the chant endures to this day. In fact, there was even a ‘We’re Not Really Here’ theatre performance, chronicling City’s highs and lows, at Manchester’s Contact Theatre in 2017, while the song has also spawned its own book and selection of pin badges and T-shirts, too.

While City fans often refer to United supporters as ‘Rags’, ‘Plastics’ or ‘Glory Supporters’, as well as calling their ground, Old Trafford, ‘The Swamp’, United fans reciprocate often by calling City’s stadium, the Etihad Stadium, ‘The Emptyhad,’ or by labelling City fans ‘Berties’.

Because, in a popular Manchester United fanzine, a character called ‘Bertie Magoo the Bitter Blue’ was portrayed to reflect the general perceived attitude of Manchester City fans.

Bertie is depicted as middle-aged and bald, with a blue nose with the word ‘Loser’ written on it, and a T-shirt with ‘Bell better than Best’ [in relation to City legend Colin Bell and United legend George Best].

You can see Bertie for yourself below: