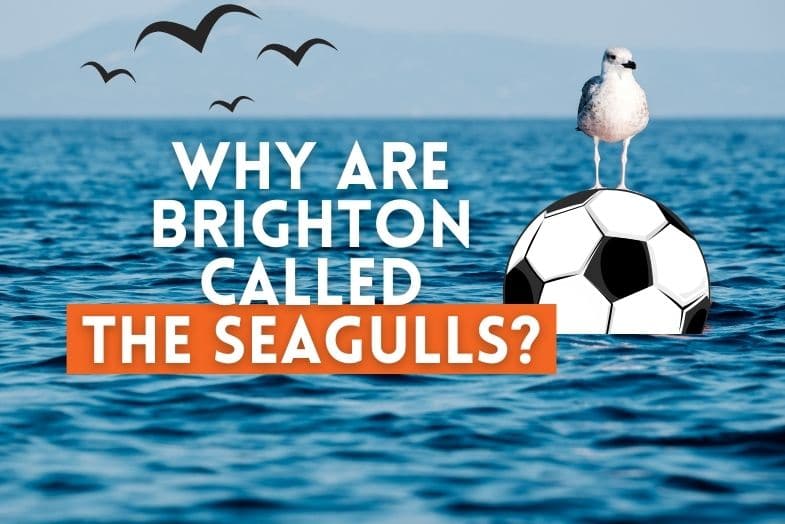 The origins of football club names and nicknames are often rooted in strange and interesting stories.

For every United, City or Town there’s a Wanderers, a Wednesday or, in our case here, an Albion – Brighton & Hove Albion.

Where does the name Albion come from? And why are their biggest rivals Crystal Palace, a club from 40 miles up the road in London?

Why Are Brighton Called ‘Albion’?

Albion is an archaic alternative name for ‘Great Britain’, which was generally only used to describe areas with white cliffs in the south of England. Thus, the ‘Albion’ is believed to derive from this, given Brighton’s location on England’s south coast.

West Bromwich Albion was the first club to use the Albion suffix, despite being a club from the Midlands in England.

Why Are Brighton Nicknamed ‘The Seagulls’?

Brighton’s main rivals are Crystal Palace, who are nicknamed the Eagles, and Brighton fans adopted the nickname The Seagulls in 1976 as a response to this, having previously been called The Dolphins. The following year, the club added a seagull to the club crest.

Who Are Brighton’s Rivals?

Brighton is located in East Sussex, and the club’s relevant geographical isolation means they have no rival clubs nearby. Instead, their biggest rivalry is with a club 40 miles away in London – Crystal Palace.

The A23 road runs directly from Croydon in London – home to Crystal Palace – to Brighton, and games between the two are sometimes referred to as the A23 derby.

Brighton’s matches against fellow south-coast clubs such as Southampton and Portsmouth are sometimes described as derbies, but in reality the fans of the clubs involved don’t view them as such.

Brighton and Palace now play regularly as both have become established in the Premier League in recent years, Brighton under the stewardship of Graham Potter, who has worked his way up in management from the Swedish fourth tier with Ostersund to become a success in the English top flight.

Why Are Brighton and Crystal Palace Rivals?

Brighton and Crystal Palace have been rivals since the 1976/77 season, with the rivalry said to stem from a personal feud between the clubs’ respective managers Alan Mullery and Terry Venables that dated back to their time playing together at Tottenham Hotspur a decade earlier.

However, there was also a rivalry on the pitch that season, with both clubs expected to earn promotion from what was the old English Third Division, known today as League One.

A war of words ensued between the managers, but a relatively uneventful 1-1 draw in the league was followed by three matches between the teams in the FA Cup, when the rivalry cranked up notch, largely because of the managers’ post-match comments.

A second replay – required after stalemates in the first two matches – was held at the neutral Stamford Bridge, home of Chelsea, and finished 1-0 to Palace, but only after referee Ron Challis ordered a penalty scored by Brighton to be retaken for apparent encroachment.

The retake was subsequently missed, Brighton were defeated, manager Mullery fined after an altercation with Palace fans while leaving the pitch, and a rivalry was born.

In a quirk of fate befitting the strange world of football, Mullery later spent two seasons as Palace manager in the early 1980s, an appointment that was greeted with fury and a short-lived boycott by the club’s fans.