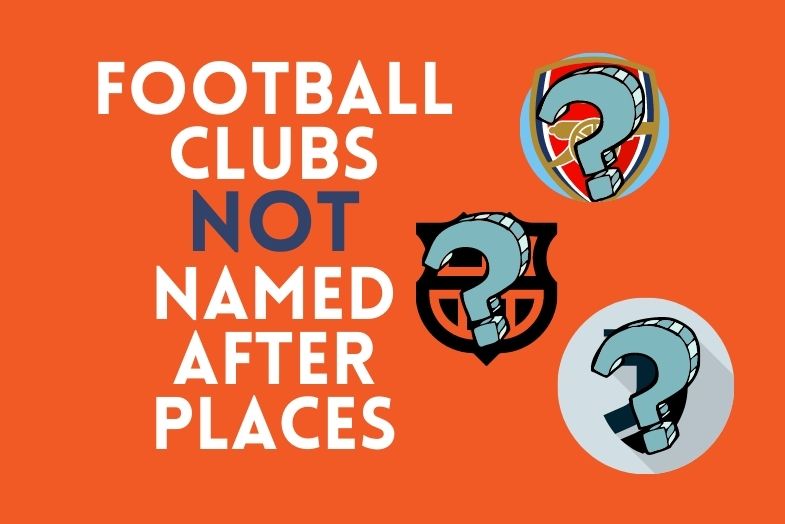 Whether it is famous cities or small town pubs, football clubs are usually named after a specific location or area across the globe.

Creating an identity for supporters amongst the footballing world, the names of clubs have been passed down throughout the years with many uniting the city or geographical place they are based in.

But are there any football clubs that are not named after a place? And if so, which teams are they?

Join us as we go through some of the top teams whose names were not sourced directly from a place in the world.

Which English Football Clubs Are NOT Named After Places?

Despite there being 92 teams in the top four English football leagues, only two clubs are not named after places in the country – Premier League side Arsenal Football Club and League Two outfit Port Vale Football Club.

Whilst these clubs are the only two to have not been named after a location, several teams in the top 92 possess names with only slight indications towards places or locations in England.

The small changes in names and locations of football clubs have helped build traditions and rivalries in the game, with most football clubs’ names originating from a specific location or area related to where they are based.

Originally named Royal Arsenal after being founded in 1886 at a pub called The Royal Oak, the club transitioned to the name Woolwich Arsenal in 1991 due to the munitions factory in Woolwich.

Woolwich would eventually be dropped from the club’s name after Arsenal moved their home stadium to the Highbury section in the London borough of Islington in the 1912-13 season.

Despite moving their stadium once again in 2006 to the still used 60,000-seat Emirates Stadium in the Islington Holloway district, the club maintained its name as Arsenal Football Club.

Arsenal decided to maintain the symbol of a cannon on their crest, a design originating from the founding members, who worked at the Royal Arsenal factory in Woolwich.

Based in Stoke-on-Trent, the club was officially founded in 1876 before moving to the town of Burslem in 1884. Alongside moving grounds, the club renamed itself as Burslem Port Vale Football Club.

After 13 non-consecutive seasons in the Football League Division two, the club was forced into liquidation in 1907. Despite this, the name Port Vale Football Club survived as football club Cobridge Church took on the name and moved into the Old Recreation Ground in Hanley.

Football Clubs That Are Not Named After Places

Despite the unusuality of not being named after a place, there are several top teams across Europe with names that are unrelated to a location.

Italian giants Juventus Football Club are by far one of the most well known, with the side being based in Turin since it’s forming in 1897.

In Scotland, The Celtic Football Club and Rangers Football Club became two of the most recognisable teams in the world, however, many supporters across Europe may be unaware of their location in the Scottish city of Glasgow.

Meanwhile, in Spain, several teams across the top divisions are not named after a place and are more often shortened to more abbreviated names.