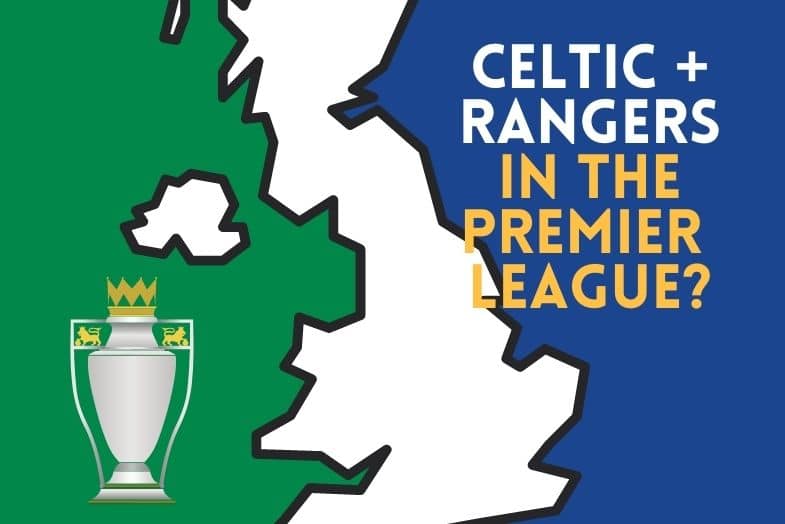 Since its formation in 1992, the English Premier League has grown to be the richest and most prestigious league in Europe.

No wonder then that clubs from other countries cast envious glances at it, including the two biggest clubs in Scotland.

There has been talk, rumours, conjecture – whatever you want to call it – for a number of years about the possibility of Celtic and Rangers breaking ranks and jumping ship to ply their trade in the English Premier League.

There’s no doubt that both clubs are big enough and prestigious enough to take their place in England’s top flight. They are multiple trophy winners – including European trophies – and both average more than 50,000 fans at their home matches.

So, given that background, will they ever play in the English Premier League? Let’s consider the pros and cons.

Why Don’t Celtic and Rangers Play in the Premier League?

Celtic and Rangers don’t play in the English Premier League for one pretty straightforward reason – they are Scottish clubs and therefore members of the Scottish Professional Football League. Thus, they cannot achieve membership of the English football system as the rules stand at the moment.

Allowing Scottish clubs to play in the English leagues would require a major restructuring of the entry rules.

However, this isn’t to say that it couldn’t technically happen, given that non-English teams currently play in the English football pyramid, and have previously graced the Premier League.

Both Cardiff and Swansea have played in the English top flight over the years, despite geographically being Welsh clubs.

However, when they were founded in 1899 and 1912 respectively there was no professional Welsh league, meaning they were admitted to play in the English leagues. That clearly wouldn’t be the case for Celtic and Rangers.

How Would Celtic and Rangers Do in the Premier League?

With their current squads and budget restrictions it is fair to say that Celtic and Rangers would more than likely struggle to establish themselves in the upper echelons of the English Premier League.

Celtic has a current estimated squad value of around £60 million, and Rangers is higher at almost £94 million. These numbers dwarf the other Scottish squads but are of course small themselves when compared to the top six in England. For instance, CIES, a Switzerland-based organisation that regularly conducts football-based statistical studies, values the current Manchester City squad at a scarcely believable £1.1 billion.

But given the far greater rewards on offer in the English Premier League, would Celtic and Rangers flourish if given access to the bags of money clubs south of the border receive?

It is likely that Glasgow would prove a relatively attractive destination for top players if the right money was on offer, given the chance to play in front of more than 50,000 fervent home fans every other week.

Both Celtic and Rangers also have rich histories and are known and supported worldwide, which may well add to the allure for players offered terms by either club if they were to ever join the English Premier League.

Would Celtic and Rangers Survive in the Premier League?

A hypothetical question, but it is fair to suggest given the size of the clubs and their current transfer budgets that Celtic and Rangers would probably survive in the English Premier League. Far smaller clubs like Bournemouth have spent several seasons as top-flight teams in recent years.

Fans of both clubs would more than fancy their chances of the teams establishing themselves as at least mid-table Premier League clubs. However, that in itself may be an excellent achievement given the competitive nature of the league.

Could Celtic and Rangers Win the Premier League?

It is highly unlikely that Celtic or Rangers could win the Premier League in its current format and with their current budget and squad restrictions.

However, if they were to join the league, establish themselves, and be in a position to attract players of title-winning quality, then who knows? Stranger things have certainly happened in football. Could they possibly ‘do a Leicester’ at some point in the future?

Do the Old Firm Clubs Want to Join the EPL?

Given the benefits on offer, especially financially, it seems obvious that both Celtic and Rangers would welcome any approach to join the English Premier League. However, they have been careful over the years not to admit this publicly.

Talk about the pair migrating south – or indeed joining other mooted new leagues – has been ongoing for more than 20 years.

Back in 2001, the 20 chairmen of the then English Premiership voted overwhelmingly not to admit Celtic and Rangers to the league following reports that both would be interested in playing south of the border, even in a new second division of the Premiership.

It was then claimed that both clubs had been lobbying UEFA to become members of what was going to be the European Atlantic League, designed to include so-called bigger teams from smaller European nations.

This drew much criticism from other Scottish clubs, who viewed Celtic and Rangers as being desperate to leave Scottish football by any means possible.

Given Rangers’ much-publicised financial and footballing problems in recent years, a move to the English leagues was nigh on impossible.

However, they regained their position as the top team in Scotland in 2021, and they and Celtic would arguably welcome a fresh approach from England’s elite sides.

Will Celtic and Rangers Ever Join the Premier League?

It is possible that Celtic and Rangers could join the Premier League set up but unlikely that they will be able to do so in its current format – instead, it could require the restructuring and expansion of the league that was suggested in early 2021.

Given their backgrounds and followings, it is likely that English Premier League clubs would see them as adding a great deal of marketing potential to the league if nothing else.

Following the collapse of plans for a European Super League, it was reported that the English clubs involved in that move were keen on restructuring and expanding their top flight, which could include invitations for both Glasgow giants.

However, what clubs in the English lower leagues, particularly the Championship, would make of two clubs from another country being parachuted in above them is a key question. It is unlikely they would welcome Celtic and Rangers with open arms.

Therefore, it seems that the possibility of the Old Firm playing top-flight football in England any time soon remains remote, despite what they and some of the Premier League clubs might want.