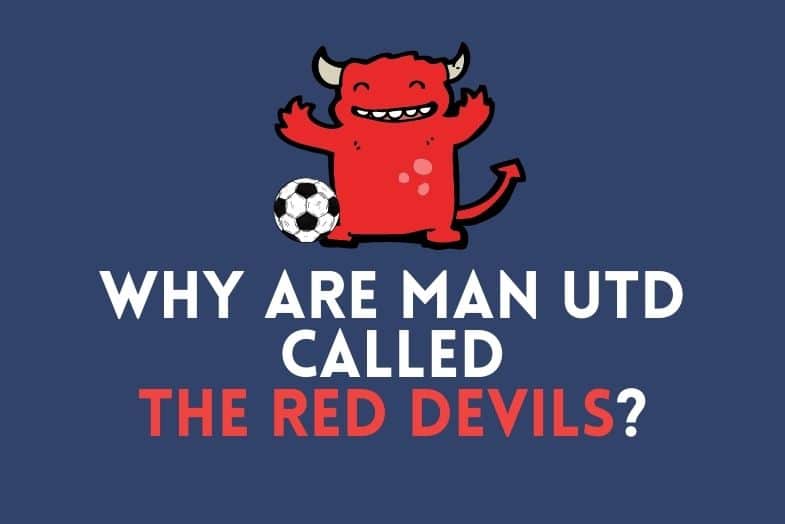 This was the case for Manchester United when manager Matt Busby lifted the name from a Salford rugby club that was called  “The Red Devils” while touring France in the 1930s.

Thinking the nickname more fitting of the club, Busby declared Man United should be known as “The Red Devils.” The nickname was soon used in programmes and scarves in the 1960s and become a part of the club crest in 1970. And the club crest made it onto the Manchester United shirt in 1971.

What Are Manchester United’s Nicknames?

Manchester United goes by the nickname of “The Red Devils.” But the club is also commonly referred to as “Man United”, “United” or simply “Man U.” Rival Man City supporters, called “The Citizens,” refer to United fans as “Rags.”

In the past, the club has also been known as “Heathens” when the club official name was Netwon Heath LYR Football Club. After being founded in 1878, the team changed its name to Manchester United in 1902.

Under the manager Matt Busby, the club won back to back titles in 1956 and 1957. They were called “Busby’s Babes.” This was because of the young age of the squad with an average age of twenty-two. That nickname was soon dropped after the Munich Air Disaster of 1958.

Why Are Man United Called’ The Red Devils’?

On February 6 1958, the United team’s charted plane crash immediately after takeoff. Twenty-three people dine including team Captain Ken Rayment and eight other players in what becomes known as the Munich Air Disaster.

A Salford rugby club was touring France in the 1930s while playing in red and white kits. They were spectacular in winning all six matches. French journalists dubbed them Les Diables Rouges or “The Red Devils.”

After the plane crash, Busby felt a more fitting name was needed. He found inspiration from the Salford rugby club and it has stayed ever since.

Manchester City supporters call United fans “Rags” referring to an uncertain period after World War II. At the time, Old Trafford had been bombed out by the Luftwaffe. Almost homeless, United had to play in City’s Maine Road stadium.

It is also believed that the term “Rags” came from Man U supporters themselves. During the early 1930s, the club was in debt and on the brink of bankruptcy. The team even played in second-hand kits! And United supporters would go to see the “Rags” play on a Saturday.

There is a reason United are a central part of the European Super League. They are one of the biggest clubs in the world. But like many football clubs, their nicknames refer to humble beginnings. Whether a tragic plane crash, WWII bombings, or tough financial times, each nickname is steeped in history.