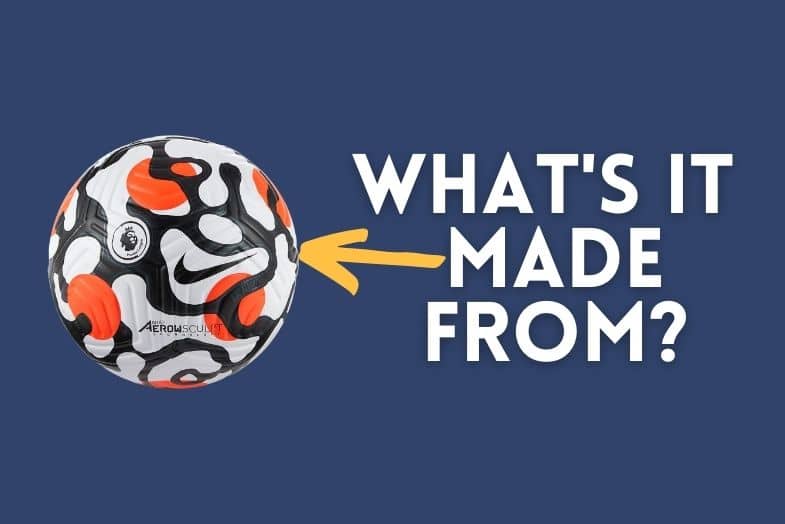 We’re all here because we are football junkies. We live for the stuff, rain or shine. But some matches just don’t seem meant for human eyes. Every now and then Jose Mourinho or Tony Pulis park the bus and we’re all in for a long afternoon.

It’s at these worst of times that the mind wanders while the “action” is taking place on the pitch. What shin pads are the lads wearing and are they required to wear the bloody things? And what is the football made of?

You think to yourself, “surely, they must be using a special lighter ball. That’s why I can’t kick the ball as hard.”

Well, let’s get to the bottom of this!

What Are Premier League Balls Made Of?

Footballs in the Premier League are manufactured by Nike. The football design changes every season but materials stay fairly consistent. Premier League footballs are made of synthetic leather, polyester, and cotton. The bladder on the inside is made from rubber.

Modern-day footballs are typically constructed up from twelve regular pentagonal and twenty regular hexagonal panels. These 32 panels are positioned and stitched in a way that creates a spherical and familiar shape.

Premier League footballs are vegan-friendly. The once traditional leather has been replaced with synthetic materials and the animal bladder with rubber. Other materials include cotton and polyester which are both vegan-friendly.

It has not always been the case that footballs in the Premier League or any other league prior were vegan-friendly. If the original footballs before the 19th century were still used today, vegans and vegetarians would likely be up in arms.

This is because, in the early iterations of association football, the balls were composed solely of animal products. The outer materials would have been pigskin or other various forms of leather.

While the inner bladder was literally an animal bladder inflated with air. Alternatively, footballs could be filled with cork shavings (ouch).

Luckily for all of us, Charles Goodyear invented what would become known as vulcanized rubber in 1838. This material allowed for inflatable bladders that helped footballs and the play on the pitch evolve into the beautiful game we all love today.

Premier League footballs are not lighter than footballs in other leagues that follow the Laws of the Game. Within the rules, it states that footballs must weigh between 410g and 450g (14-16 oz).

While footballs have always had to meet weight regulations, older game balls would likely have become heavy with moisture from wet pitches and weather conditions. The footballs of the 1960s, 70s, and 80s would have been made out of leather and primed to take on water.

How Much Do Premier League Balls Cost?

Premier League footballs vary in price between £100 and £150 per ball. This is because there are several editions and colourways released. Also, a new model is released every season which means last season’s football will go on sale.

Modern footballs have come a long way. The vegan-friendly materials will continue to improve. We can expect a similar evolution in the play on the pitch as sports science and analytics continue to alter the game. But despite their improvements, footballs are only used for one game. What happens to footballs after a match is a question we will answer at another time.