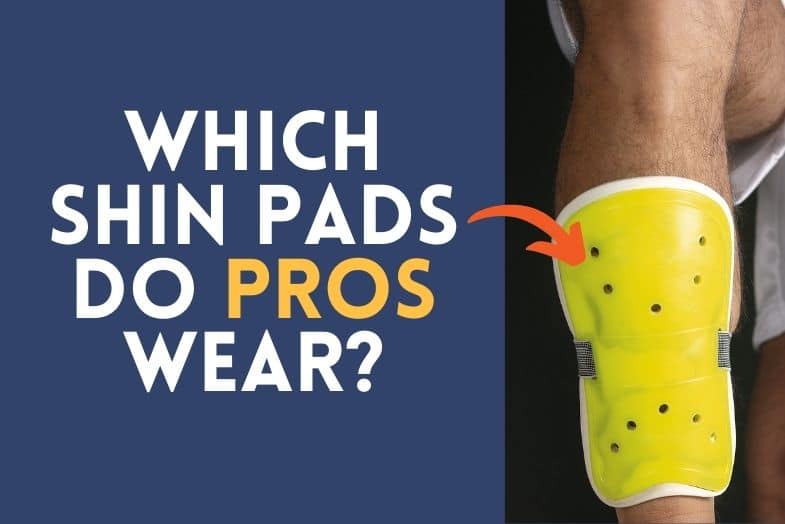 Footballers wear a lot of kit and equipment when they cross the white lines and step out onto the pitch. Not only do they need to be wearing their team’s colours but they also have to ensure their boots are appropriate for how soft or firm the pitch is.

Those equipment requirements don’t stop there, with some wearing what appear to be sports bras under their shirts and a set of shin pads. So, if every professional footballer must wear shin pads, there are probably some preferred brands and styles, like with boots, right?

Let’s take a look at the shin pad trends followed by professional footballers, including the most popular shin pads and which ones the stars wear.

All players are required to wear shin pads before entering the field of play. As per FIFA rules, shin pads (or shin guards) must be entirely covered by a player’s socks and be made of rubber, plastic or a similar suitable material. They must offer a reasonable level of protection to the player.

As we know, referees are there to enforce the rules of the game. Their ‘jurisdiction’ extends to enforcing equipment requirements, and players can be refused entry onto the field if they do not comply.

If they deem a player’s lack of equipment to be breaching the rules, or placing the player in danger, they can intervene. As far as the size of shin pads go, there are no specific rules that dictate how big or small they can be.

This is why you may see a player like Jack Grealish wearing tiny shin pads and others with practically their entire lower legs protected. If a player’s shin pads fall out, they must be replaced otherwise the referee may refuse to let them continue playing.

This post may contain affiliate links, meaning SQaF may receive a small commission for any purchases you make via these links at no cost to you. This helps SQaF to continue to create winning content for you.

One common problem with shin pads is how uncomfortable they can be. That’s not an issue with the G-Form Pro-S Elite Shin Guards which are flexible and flow with the shape of your leg. They are made using Reactive Protection Technology which offers high levels of protection from impact but are also breathable, flexible and fit snugly to your shin.

When playing, the shin pads are soft and flexible but, when impacted by something like a hard tackle, the pads become rigid and firm. This structural change provides the combination of flexibility and strength required in a comfortable shin pad. 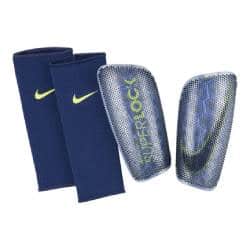 With shin pads having the potential to be uncomfortable, sports giant Nike has a solution for slip-in pads. Slip-in pads are, unsurprisingly, slipped into your socks rather than being built in and self-contained, like the G-Forms above.

Nike Mercurial Lite SuperLock Shinguards use special spikes on the front to embed into your football socks, locking them in place. This means you won’t need to tape them in place, cutting off the circulation in your legs, nor will you have to keep hoiking them up during a match. These pads simply stay in place, becoming a part of your socks. 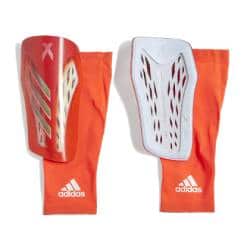 The biggest brands in football typically dominate all markets within it, and shin guards are no exception. Adidas, another of the biggest sports brands in the world, is also a major player in the shin pad world thanks to the X Pro Shin Guards.

These slip-in shin pads are light as a feather while flexible enough to adjust to the contours of your leg, resulting in zero distractions when you’re on the field. Their small size means you can barely feel them while tucked into your socks but they are strong enough to protect you when it matters.

G-Form is doing its best to revolutionise the shin pad market and, not content with an elite built-in shin pad, the company also offers a slip-in version. The G-Form Pro-S Blade Guard is just as lightweight, flexible and strong as the Pro-S Elite but it just slips into your sock.

Their multilayer construction allows for a weightless feeling in your sock while also allowing them to contort to match the shape of your leg. Thanks to the breathable mesh, your legs won’t be feeling the sweat that can sometimes be a bit much (and smelly) with second-rate shin guards.

What Shin Guards Does Ronaldo Wear?

Like boots, many footballers wear shin pads from their sponsors. As Nike is one of Ronaldo’s main sponsors, it’s little surprise to discover that he wears Nike Mercurial Lite SuperLock Shinguards.

Footage of Ronaldo putting his shin pads on in 2021 highlighted that the Portuguese star has his face on them. Many accuse the Manchester United star of being a little vain but his personalised shin pads seem to take things to another level. Still, it’s better to have his own face on his shin pads than the face of another pro footballer.

What Shin Guards Does Messi Wear?

Like Cristiano Ronaldo, the boots Lionel Messi wears are dictated to him somewhat by his sponsors, Adidas. In the past Messi has worn camouflaged shin guards by Adidas and its safe to assume that he wears either Adidas Predator or Adidas X Pro Shin Guards.

Considering how often Messi is fouled, it’s fair to say that he has gone through a lot of shin pads in his career. This is especially true as Adidas often presents Messi with new shin pads for special matches and events in his career.

If you thought that Jack Grealish is playing with a pair of child’s shin pads then you aren’t far off the mark. The England and Manchester City star is superstitious about his shin pads and socks, wearing kids size seven since he was a teenager.

Grealish says he was forced to wear tiny shin pads one year during his teens as the socks at Aston Villa shrank so much he couldn’t get them over his calves. He played really well that season and since then, Grealish has ensured he wears his socks low and shin pads tiny.