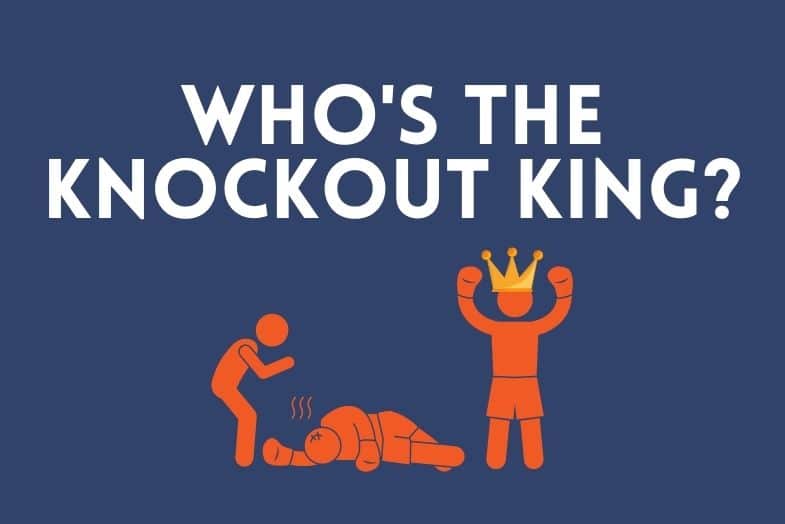 In the current day and age, mixed martial arts managed to become the fastest growing sports in the world thanks to its ability to attract fight fans from various backgrounds.

While a section of die-hard supporters would enjoy a technical battle, the so called “just bleed” fans are in it for the slugfests.

However, the vast majority of the audience would agree on one thing: nothing beats a clean knockout finish.

So who is the ultimate knockout king in the Ultimate Fighting Championship? And which fighters have collected the most KO/TKO wins in each division?

Most Knockouts in UFC History [Top 12]

The following table will include the fighters who have earned ten or more knockout wins during their UFC tenures.

Derrick Lewis is the current knockout king of the UFC with 13 KO/TKO wins to his name. The former title challenger broke the previous record set by Vitor Belfort and Matt Brown by earning his 13th knockout under the promotion’s banner at the expense of Chris Daukaus on 18 December 2021.

Since signing for the organization back in 2014, the “Black Beast” quickly cemented himself as a fan favorite with most of his fights ending with his opponent flat on the canvas, which is often followed by an entertaining post-fight interview. As viewers, we can’t ask for better.

The American is one of the largest fighters in the company’s largest division, which means that we’re talking about a man of an enormous size. Therefore, Lewis isn’t a fan of long and draining fights, as he prefers to get the business done rather quickly, and luckily for him, he is blessed with extraordinary power in his hands.

So let’s a look at the fighters who suffered the American’s wrath inside the Octagon and were on the receiving end of his knockouts.

Most Knockouts by UFC Division

In the list below, we’ll take a look at the fighters with the most knockout wins in every UFC weight class.

Most KOs in UFC Heavyweight Division

As the ultimate knockout king inside the Octagon, Derrick Lewis is obviously the heavyweight with the most KO/TKO wins in the UFC heavyweight division. His record is currently set at 13.

Chuck Liddell still holds the record for the most knockout wins in the UFC light heavyweight division with 10 knockouts. During his heyday, the “Ice Man” was one of the biggest names in the growing sport, as well as being one of it’s earliest crossover stars and of course one of the best paid fighters at the time.

The former champion used to capitalize on his wrestling background to defend takedowns and keep the fight on the feet, which would allow him to knock out his opponent.

Most KOs in UFC Middleweight Division

Three fighters currently share the record for the most knockouts in the UFC middleweight division. Anderson Silva, Thiago Santos and Uriah Hall each have eight KO wins.

The legendary Silva is arguably the greatest name in the division’s history. On the other hand, Santos moved up to light heavyweight in 2018 before he got the chance to break the Spider’s record.

While he has never managed to fulfill his early promise, Hall still has the chance to become the sole holder of the record at 185 pounds.

Most KOs in UFC Welterweight Division

Matt Brown is the welterweight with the most knockout wins in the division. The “Immortal” knocked out 12 of his opponents during his lengthy UFC tenure.

Most KOs in UFC Lightweight Division

Dustin Poirier has the most KOs in the UFC lightweight division with eight so far. The “Diamond” can finish fights in various ways, including a combination of strikes that leaves his overwhelmed opponent on the ground. He managed to knockout Conor McGregor in twice in their memorable trilogy.

Most KOs in UFC Featherweight Division

Max Holloway is one of the most successful featherweights in history, and has eight knockout wins in the UFC’s 145 division. The Hawaiian isn’t exactly the most powerful of strikers, but he knows how to capitalize on his long reach and can throw a high volume of strikes that wears out his opponent.

Most KOs in UFC Bantamweight Division

Two-time UFC champion champion T.J. Dillashaw holds the record for the most KOs in the bantamweight division with seven finishes. Despite his wrestling background, the American turned himself into a knockout artist, capitalizing on his striking power which is rarely found in the smaller weight classes.

Most KOs in UFC Flyweight Division

Joseph Benavidez holds the record for the most knockouts in the UFC flyweight division with five KO/TKO finishes. The retired fighter was one of the pillars of the division that was found in 2012, and he competed for the title on several occasions, but always fell just short.

Most KOs in Women’s UFC Divisions

Three fighters hold the record for the most knockout wins in the women’s featherweight division with just two. They are former champion Cris Cyborg and former title challengers, Megan Anderson and Felicia Spencer.

In the women’s bantamweight division, Amanda Nunes holds the record at six. The “Lioness” is arguably the most successful female fighter in the organization’s history.

As for the women’s flyweight division, Valentina Shevchenko dominated the weight division after moving down back in 2018. She currently holds the record for the most knockouts at 125 pounds with four KO wins.

Finally, Jéssica Andrade is one of the most popular brawlers in the UFC’s women division, and she holds the record for the most knockout wins at strawweight with three finishes.