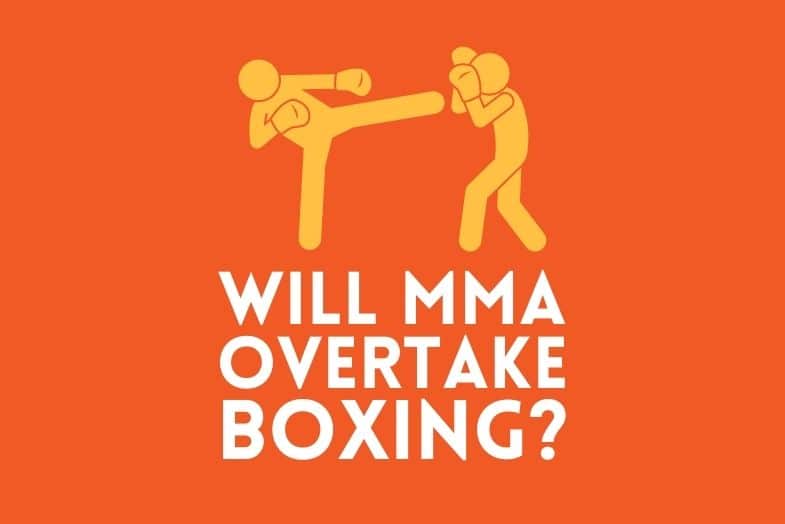 Until the end of the 20th century, boxing sat unchallenged on the throne of combat sports. The rise of a competitor sport was almost unthinkable at the time.

And yet, a brand new combat sport appeared out of the blue and captured the fans’ imagination.

Today, mixed martial arts (otherwise known as MMA) is promoted as the fastest growing sport in the world, and its swift development is threatening the very existence of boxing which risks being left in the dust.

So what exactly is MMA? And why did it become so popular? On the other hand, why is boxing losing its popularity? And most importantly, will MMA become more popular than boxing?

While some would claim that the origin of the sport dates back to antiquity (ancient Greece or the old Chinese Empire), it’s modern rise started in 1993 with the launch of the Ultimate Fighting Championship, or as most of us simply know it as UFC.

The organizer’s intention was building an arena where various champions from different combat sports collide to find out who’s the ultimate best.

However, with the fast development of the sport, this concept has become outdated.

Today, gyms all around the world train MMA as a whole sport, producing true mixed martial arts fighters. We’re talking about women and men who possess a wide range of skills and are able to compete wherever the fight goes (on the ground or on their feet).

Is Boxing a Dying Sport?

Perhaps boxing lost some if its esteem lately, but calling it a “dying sport” would be an exaggeration, at least in the current day and age.

Surely the sport is no longer drawing the same size of audiences as of late, but it will always have its die-hard followers.

These loyal fans will stick by their beloved sport through thick and thin, which will allow boxing to survive if not prosper.

However, every sport builds its glory upon casual fans. We’re talking about those who would flock to watch when things are looking interesting, but will then slowly distance themselves from it once they’re no longer entertained.

The problem in boxing at the moment is the lack of cross-over stars who can attract these type of followers and make them tune in to watch the fights. The likes of Muhamad Ali, Mike Tyson and even Floyd Jr. Mayweather.

Why is Boxing Losing Popularity?

There are multiple of reasons that can explain the decline in boxing’s popularity, including the lack of cross-over superstars, the lack of exciting matchups, the excessive number of organizations and weight classes creating a extravagant number of belts, and even the rise of MMA.

While mixed martial arts may have played a part in boxing’s decline, it was the latter’s internal problems that instigated the fall in the first place.

We mentioned above how the sport is losing the type of fighters who can draw a wide audience, and that has played a part in the decline of pay-per-view numbers.

Moreover, the best boxers don’t always end up fighting one another due to the huge number of acknowledged world title belts within the sport.

As we explained in another study, boxing has at least four recognized organizations (WBC, WBO, WBA and IBF) with each of them adopting up to 17 weight classes. So we’re talking about at least 68 legitimate world title belts.

While the promoter loves adding the “world championship” tag to every fight that he promotes, the fans find it hard to track the excessive amount of champions.

This also allows some of the title holders to dodge one another, with each holding one or more belts and content to defend it once or twice a year against relatively unknows who offer very little threat.

And this is without mentioning the corruption allegations that have been haunting the sport starting from the very top of the hierarchy.

Why is MMA So Popular?

There are many factors that contributed in MMA’s growing popularity, including action-packed fights, a variety of fighting styles that makes it all the more compelling and a dominant organization that makes it easy for the fans to track the biggest fights in the world.

Contrary to boxing, the MMA scene is dominated by the Ultimate Fighting Championship that has acted as the home of the vast majority of the elite fighters since the fall of its Japanese competitor PRIDE back in 2006.

Even though the organization has its faults, UFC president Dana White’s company always works to book the biggest possible fights that the fans wish to see.

Additionally, the company has a limited number of weight classes (8 for men and 4 for women) which helps in limiting the number of world champions and decreases the ability of a certain fighter to dodge fights.

From a technical perspective, MMA hosts various fighting techniques, contrary to boxing which only requires a limited skillset. Therefore, MMA fights can attract a broader audience.

We can also add the fact that MMA fights can be much more dynamic in comparison with boxing contests. We’re talking about longer rounds (5 minutes) and less time wasting.

In order to track MMA’s growth throughout the years, we’ll take a closer look at some of the numbers registered by the sport’s leading company.

We’ll compare UFC’s figures between 2005 (when a reality show called “The Ultimate Fighter” provided the company with a major boost in popularity) and 2020, as reported by BloodyElbow.

As we can see, the UFC’s business has grown significantly in the last 15 years or so, with much more fights, better paydays and bigger revenues, even if boxers are still better paid in comparison with the average MMA fighter.

Comparing the popularity of these two sports isn’t a straight-forward task, but in order to get a better picture, we’ll use pay-per-views as an indicator.

So let’s take a look at how many events generated more than a million buys in each year starting from 2010.

While the comparison seems to be in favour of boxing, it must be noted that the sport’s current PPV buys completely pale in comparison with those of from the glory days. It’s suffice to mention that the third fight between Mohamed Ali and Joe Frazer registered more than 100 million buys, an unimaginable number in the current day and age.

Since Mayweather’s last fight against Conor McGregor, boxing has never been able to register more than 2 million buys according to the numbers posted by Wikipedia.

So is MMA set to surpass boxing as the most popular combat sport on the planet?

Is MMA Going to Be Bigger than Boxing?

Even though MMA is still considered to be a young sport on the rise while boxing is struggling to reignite its old magic, we can’t say for sure that the former will become bigger than the latter.

Now surely some of the indications are in favour of mixed martial arts, but as the number of PPV buys proves, it’s all about having the most charismatic and most promotable stars in your roster.

Boxing has been suffering without a cross-over star like Mayweather, but mixed martial arts could be facing a similar problem.

After all, Dana White’s fortune was built upon cross-over stars like Brock Lesnar, Conor McGregor and Ronda Rousey, or incredibly popular fighters like Tito Ortiz, Chuck Liddell and Chael Sonnen.

Today, the UFC’s roster might be at its very peak on a technical level, but Khabib Nurmagomedov’s retirement and Conor’s losing streak has left the company with very few promotable stars.

In conclusion, the future of both sports could depend on their ability to attract the most charismatic and popular fighters. The sport that fares better in this department will most likely have the upper hand on its competitor.